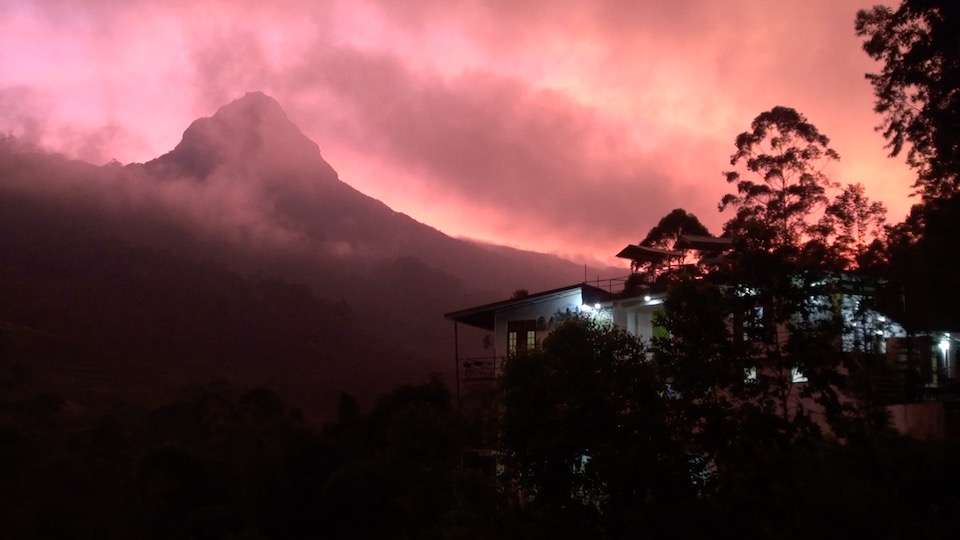 Adam’s Peak is a place of worship and pilgrimage by many religions for more than 1000 years. Also known as Sri Pada, it is home to a foot imprint on a rock at its summit. Depending on the faith, the footprint has been considered that of Buddha, the god Shiva, St. Thomas, and even, Adam after he was expelled from the Garden of Eden.

I arrived in time for sunset, the peak is in full view, flowing clouds shroud and clear the peak, and the changing light of the setting sun displays a glowing aura of light along with the silhouette of the mountainside.

Sleepless and having been up since 730am where I had breakfast in Galle, caught my sea-plane with Cinnamon Air at 1130am from Koggola to Kandy where my driver from Kulansa Tours was waiting to transfer me here to Delhousie at the base of Adam’s Peak, a long 4 hour drive through rough roads and fantastic countryside, getting it is hard. The scenery is beautiful and mostly unspoiled with tea plantations, hills, valleys and lakes. There are several guesthouses to spend the night, including “Slightly Chilled” where I chose to stay before my ascent.

I’m slightly scared to start my hike up to Adam’s Peak, scheduled to start at 2 am. I am restless. Excited. Nervous. It’s offseason and the path is black and not lit, only darkness ahead. Billions of stars hang in the night sky, a most amazing view of space and heavens above. They say one must remain positive during the ascent and descent to bring good karma.

Excited, I have waited for this for months. All the preparation and suddenly it presents the fear of the path ahead. A small torch and my iPhone will light the way until daylight breaks. I’ve prepared my clothing, bag, water, camera etc.

Adam’s Peak is a 2,243 m (7,359 ft) tall conical mountain located in the southern Hill Country of central Sri Lanka. The soaring summit is one of Sri Lanka’s most striking natural landmarks and one of its most celebrated places of pilgrimage for more than 1000 years. It is revered as a holy site by Buddhists, Hindus, Muslims and Christians.

The often-used Sri Pada is derived from Sanskrit, used by the Sinhalese people in a religious context, and maybe translated roughly as “the sacred foot”. It refers to the footprint-shaped mark at the summit, which is believed by Buddhists to be that of the Buddha. Christian and Islamic traditions assert that it is the footprint of Adam, left when first setting foot on Earth after having been cast out of paradise, giving it the name “Adam’s Peak”. Hindu tradition refers to the footprint as that of the Hindu deity Shiva, and thus names the mountain Shiva Padam (Shiva’s foot) in Tamil.

First mentioned in the 4th century, Sri Pada is where it is stated that the Buddha visited the mountain peak. The mountain has been an object of pilgrimage for over a thousand years, at least since the Polonnaruwa period. The Arab traveller Ibn Batuta and Marco Polo have even recorded their visits here. The first English traveller to visit the peak, John Davy (1817), recorded observing an over-sized footprint carved in stone and ornamented with a single margin of brass and studded with gems.

The Legend – The Sacred Mountain

Adam’s Peak remains an essentially Buddhist place of worship. The original Buddhist story claims that this is the footprint of the Buddha himself, made at the request of the local god Saman. For Buddhists, the footprint mark is the left foot of the Buddha, left behind when Buddha visited Sri Lanka, as a symbol for worship at the invitation of Buddhist God Saman.

Different faiths subsequently modified this to suit their own contrasting theologies. Sometime around the eighth century, Muslims began to claim the footprint to be that of Adam, who is said to have first set foot on earth here after being cast out of heaven, and who stood on the mountain’s summit on one leg in penitence until his sins were forgiven. Hindu tradition, meanwhile, claimed that the footprint was created by Shiva. Many centuries later, the colonial Portuguese attempted to rescue the footprint for the Christian faith, claiming that it belonged to St Thomas, the founder of the religion in India.

The legends of Adam are connected to the idea that Sri Lanka was the original Eden.

I attempted the ascent in the early hours of the morning, with the goal of seeing the sunrise. I did the climb out-of-season in late September. None of the tea-shops open and the lights are off, so you’ll need to bring a torch/flashlight. The path was dark. Bring food and especially water is important (bring 2 bottles per person). I brought one bottle of water, and soon I found I had to start rationing as I knew there was not enough to complete the climb and for the return down.

During the pilgrimage season, which begins on poya day in December and runs until Vesak festival in May (January and February are busiest), pilgrims and tourists alike make the climb up the countless steps to the top. During the season the weather on the mountain is at its best, and the chances of clear dawn at the summit highest; the steps up the mountainside are also illuminated and little stalls and tea-shops open through the night to cater to the throngs of weary pilgrims dragging themselves up.

The ascent of Adam’s Peak is traditionally made by night, a remarkable experience, with the glimmer of the billions of stars leading into the heavens overhead, allowing you to reach the top in time for dawn, which offers the best odds of seeing the extraordinary views free from the cloud as well as a chance a glimpsing the peak’s enigmatic shadow. The stairway to the top is believed to be one of the longest in the world.

Start the 7km climb from Dalhousie, a 2 am start should get you to the top in time for dawn at around 6–6.30 am. The ascent takes on average 2-3.5 hours and is particularly steep towards the top, although is quite safe as there are hand rails to hold on.

The ascent is done on foot through the forested mountainside on the steps built into it.  The track up the mountain starts at the far end of Dalhousie village, passing a large standing Buddha, crossing a bridge and looping around the back. For the first thirty minutes, the path winds gently through tea estates, past Buddha shrines and through the big makara torana arch which marks the boundary of the sacred area. Beyond here the path continues to run gently uphill to the large Peace Pagoda, built with Japanese aid during the 1970s.

Beyond the Peace Pagoda, the climb – and the steps – start not too bad at first, but they become increasingly short and steep as you progress. The greater part of the track leading from the base to the summit consists of thousands of steps built in cement or rough stones. By the time you reach the leg-wrenchingly near-vertical section equipped with handrails, you’re within about 1500 steps of the summit, although by then it’s a real physical struggle. The path is very secure and enclosed, and obviously, at night, you won’t be able to see anything on the way up in any case.

However fit you are, the Adam’s Peak climb is exhausting – a taxing 7km up a mainly stepped footpath, around 5500 steps, which can reduce even seasoned hillwalkers to quivering wrecks.  It can get bitterly cold at the summit, take warm clothing, you’ll need it because you will be drenched in sweat from your climb.

A torch or flashlight is required as the path is not lit during the off-season. In the pilgrimage season, the trails are illuminated with electric light, making night-time ascent possible and safe to do even when accompanied by children. Rest stops and wayside shops along the trails serve refreshments and supplies.

After reaching the top, climbers can ring the bell to mark the journey they just made. The panoramic view makes the journey well worth the effort.

On the way down, leg muscles will be overexerted. The descent is much quicker though no less painful since by now your legs will have turned to jelly.

The summit is covered in a huddle of buildings. Sheltered under a tiny pavilion, the temple on the summit is unused and not accessible. the footprint itself cannot be seen. The views are as spectacular as you would expect, clouds lying 500m below hit the mountain and skim over the top, giving a spectacular sight. While as dawn breaks you may also see the mysterious shadow of the peak.

One of the mysteries of Adam’s Peak is the shadow’s perfectly triangular outline. The Buddhist explanation is that it’s not actually the shadow of the peak at all, but a miraculous physical representation of the “Triple Gem” (a kind of Buddhist equivalent to the Holy Trinity, comprising the Buddha, his teachings and the community of Buddhist monks).

As dawn illuminates the holy mountain, the diffuse morning light uncovers the Hill Country rising in the east and the land sloping to the coast to the west. Colombo, 65km away, is easily visible on a clear day.