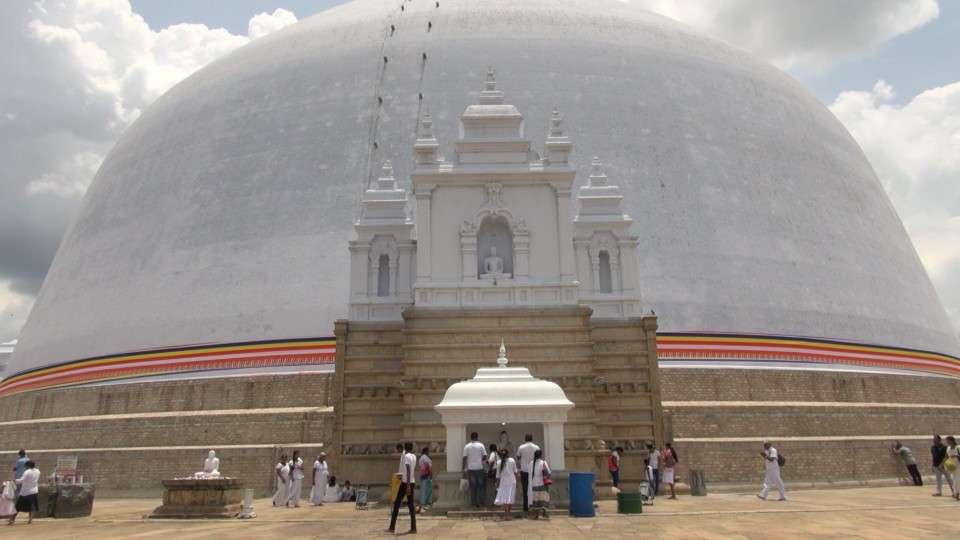 Anuradhapura is one of the ancient capitals of Sri Lanka, famous for its well-preserved ruins of ancient Sri Lankan civilization.

The city, now a UNESCO World Heritage, was the centre of Theravada Buddhism for many centuries. The city lies 205 km north of the current capital Colombo in Sri Lanka‘s North Central Province, on the banks of the historic Malvathu Oya. It is one of the oldest continuously inhabited cities in the world and one of the eight World Heritage Sites of Sri Lanka.

The ancient city of Anuradhapura was first settled ca. 900 B.C., and served off and on as the capital of the Sinhalese Kingdom until ca. 1100 A.D., when the capital moved further south. The ancient city, considered sacred to the Buddhist world, is today surrounded by monasteries. The city was quite large in its heyday, and so there is a lot of archaeology to see.

The ruins consist of three classes of buildings, dagobas, monastic buildings, and pokunas. The dagobas are bell-shaped masses of masonry, varying from a few feet to over 1100 ft (340 m) in circumference. Some of them contain enough masonry to build a town for twenty-five thousand inhabitants. Remains of the monastic buildings are to be found in every direction in the shape of raised stone platforms, foundations and stone pillars. The most famous is the Brazen Palace erected by King Dutugamunu about 164 BC. The pokunas are bathing-tanks or tanks for the supply of drinking water, which are scattered everywhere through the jungle. The city also contains a sacred Bo-Tree, which is said to date back to the year 245 BC.

Bodhi Tree Temple (The Sri Maha Bodhiya), is the second most sacred place in Sri Lanka, after the Sri Dalada Maligawa, or Temple of the Tooth, in Kandy. The Bodhi Tree is allegedly a cutting from the original Bodhi tree under which the Buddha gained enlightenment, and has been continuously guarded for over 2000 years, making it the oldest historically authenticated tree in the world. The temple complex is surrounded by walls and is quite busy with monks and worshipers.

Ruwanwelisaya: the oldest and most voluminous stupa at Anuradhapura, has been fully restored, painted white, and is currently a centre of worship. There are several image houses at the stupa, as well as four smaller stupas in the four corners of the complex.

Jetavana: Buddhist worship structure, also known as “Dagoba“. At 120m (400ft.) tall, this was the third tallest structure in the ancient world (after the Great Pyramids at Giza), and the largest in Sri Lanka.

The Citadel: This was the secular centre of the city. The Gedige and other palaces can be found here, as well as the old city walls.

The Moonstone: Moonstones, to be found throughout Anuradhapura, were at the entrances to monasteries, and represented the movement from the secular to the sacred worlds, by following the path to enlightenment, as carved into the moonstone. This moonstone is of particular note, for its size and impressive decoration.

Lovamahapaya: Between Bodhi Tree Temple and Ruwanwelisaya. The 1600 stone pillars that we see today are what is left of an enormous building. Also called the Brazen Palace, this nine-storey monastery was once home to a thousand monks, whose duties included tending the sacred Bo tree, which grew right next to the building. King Dutugemunu (the palace founder) saw to it that the roof of Lovamahapaya was covered in bronze tiles and that its walls were decorated with silver and precious stones.

Isurumuniya Vihara: This is located near Tisawewa (Tisa Tank). There are interesting rock carvings to see, especially the Isurumuniya lovers.

During the late Anuradhapura period, the royal family and nobility of Sri Lanka strongly supported Buddhism. As such, they frequently commissioned works of art and donated these items to Buddhist temples. In return, the temple and local Buddhist community supported the king’s rule.

The city’s popularity grew both as a ritual centre and as the administrative centre, a large population was attracted to the city for permanent settlement. Thus the living facilities were improved to accommodate the expanding population. King Vasabha constructed many ponds which were fed by a network of subterranean channels which were constructed to supply water to the city. Parks were also provided in the city. Large lakes were also constructed by the city’s rulers to irrigate paddy lands and also to supply water to the city. Nuwara wewa and Tissa wewa are among the best-known lakes in the city. The city had some of the most complex irrigation systems of the ancient world, situated in the dry zone of the country the administration built many tanks to irrigate the land. Most of these tanks still survive.