Atlas Mountains stretches around 2,500 km (1,600 miles) through Algeria, Morocco and Tunisia.  It separates the Mediterranean and Atlantic coastlines from the Sahara Desert.

The range’s highest peak is Jebel Toubkal, with an elevation of 4,167 metres (13,671 ft) in southwestern Morocco. The Atlas mountains are primarily inhabited by Berber populations.

The Atlas was formed during three subsequent phases of Earth’s history. The first tectonic deformation phase involves only the Anti-Atlas, which was formed in the Paleozoic Era (300 million years ago) as the result of continental collisions. North America, Europe and Africa were connected millions of years ago.

The Anti-Atlas Mountains are believed to have originally formed when Africa and America collided, and were once a chain rivaling today’s Himalayas.

In the Paleogene and Neogene Periods (66 million to 1.8 million years ago), the mountain chains that today comprise the Atlas were uplifted as the land masses of Europe and Africa collided at the southern end of the Iberian Peninsula. Convergent tectonic boundaries occur where two plates slide towards each other forming a subduction zone, if one plate moves underneath the other, and/or a continental collision (when the two plates contain continental crust).  In the case of the Africa-Europe collision, it is clear that tectonic convergence is partially responsible for the formation of the High Atlas, as well as for the closure of the Strait of Gibraltar and the formation of the Alps and the Pyrenees. 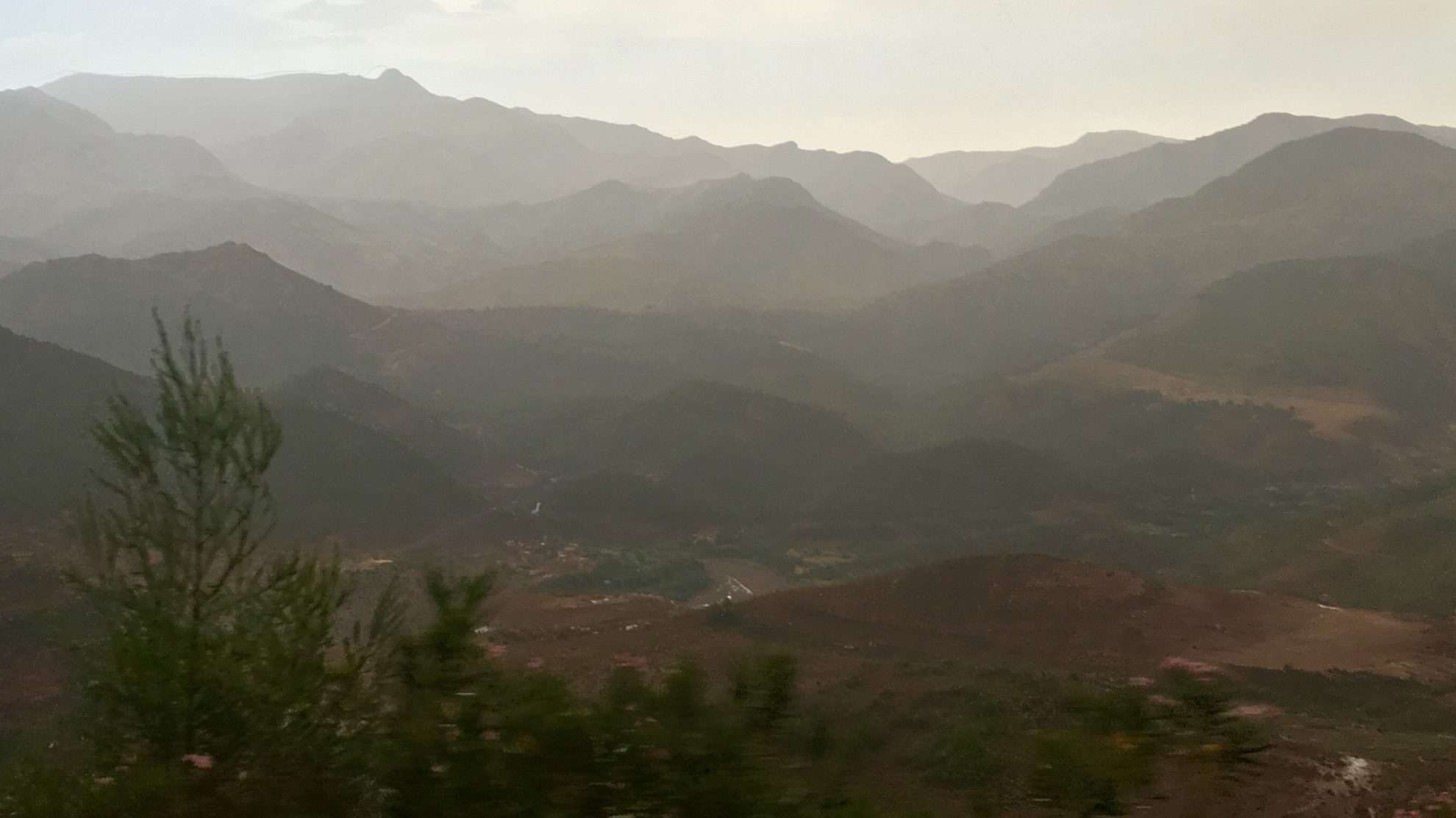 The range can be divided into four general regions:

The High Atlas in central Morocco rises in the west at the Atlantic coast and stretches in an eastern direction to the Moroccan-Algerian border. The High Atlas stretches for 700 kilometres (430 mi) with a succession of peaks among which ten reach above 4,000 metres (13,000 ft). At the Atlantic and to the southwest the range drops abruptly and makes an impressive transition to the coast and the Anti-Atlas range. To the north, in the direction of Marrakech, the range descends less abruptly.

The Anti-Atlas extends from the Atlantic Ocean in the southwest of Morocco toward the northeast to the heights of Ouarzazate and further east to the city of Tafilalt (altogether a distance of approximately 500 kilometres or 310 miles). In the south it borders the Sahara. The easternmost point of the anti-Atlas is the Jbel Saghro range and its northern boundary is flanked by sections of the High Atlas range.

The Saharan Atlas of Algeria is the eastern portion of the Atlas mountain range. Though not as high as the Grand Atlas, they are far more imposing than the Tell Atlas range that runs to the north of them and closer to the coast. The highest peak in the range is the 2,236 m (7,336 ft) high Djebel Aissa. They mark the northern edge of the Sahara Desert. The mountains see some rainfall and are better suited to agriculture than the plateau region to the north.

The Tell Atlas is a mountain chain over 1,500 kilometres (930 mi) in length, belonging to the Atlas mountain ranges and stretching from Morocco, through Algeria to Tunisia. It parallels the Mediterranean coast. Together with the Saharan Atlas to the south it forms the northernmost of two more or less parallel ranges which gradually approach one another towards the east, merging in Eastern Algeria.

The Aurès Mountains of Algeria and Tunisia are the farthest eastern portion of the Atlas mountain range.

As featured in Road to Desert • Morocco