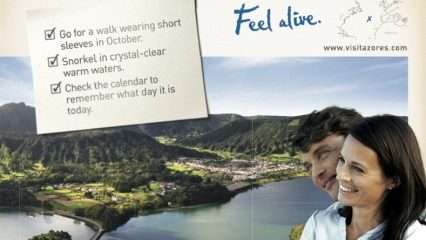 Is the Azores about to have its moment in the travel world?

The Azores is about to go through a huge European advertising campaign promoting tourism in the region. A footnote in the ad indicates ‘construir o futuro‘, meaning ‘building for the future’.

In the last 20 years, there has been significant infrastructure development on the islands with improved roads and highways, along with a new airport in Ponta Delgada and new routes for its regional airline SATA with direct flights from London, Boston, Toronto, Madrid, Barcelona, Gran Canaria, Brussels, Amsterdam, Frankfurt, Dusseldorf, Nuremberg, Oslo, Copenhagen, Stockholm,  Helsinki, and codeshare and routes from Poland and eastern Europe.

The Azores ‘Feel Alive’ ad and website Visit Azores promotes eco-tourism and natural beauty in the region such as hiking, whale watching, and traditions of the island. It boasts 120 geological sites to explore on the 9 islands isolated in the middle of the Atlantic.

Tourism has always focused on mainland Portugal and the offshore island of Madeira, but this indicates a new focus and push for the autonomous region of the Azores.

These islands offer new options for the off-beat traveller who aims to avoid mainstream destinations and explore a part of the world few know about, though it remains a place reserved for outdoor adventure seekers and explorers.

Visit my pages on Azores, São Miguel, Ponta Delgada, and Achada for photos and videos of the region.