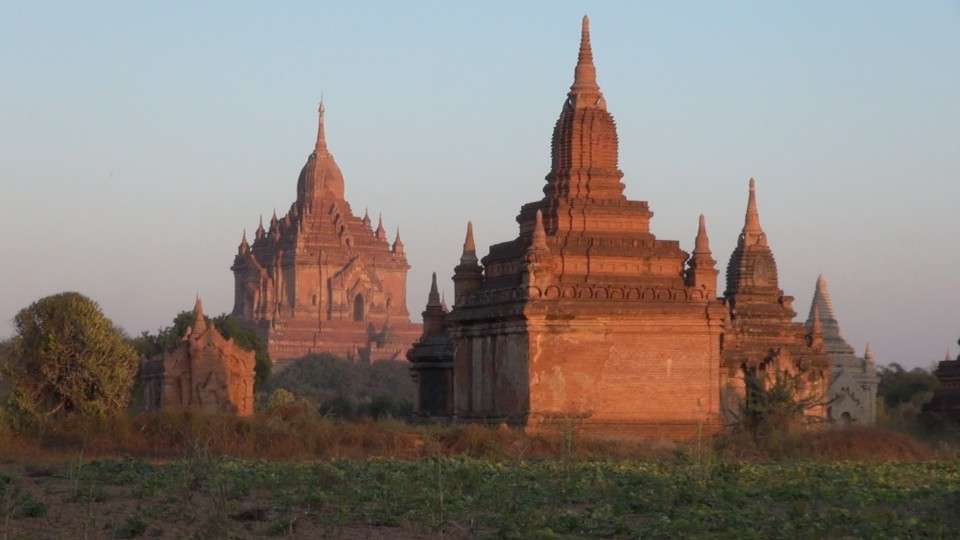 Bagan, located on the banks of the Ayeyarwady River, is home to the largest and densest concentration of Buddhist temples, pagodas, stupas and ruins in the world with many dating from the 11th and 12th centuries. The shape and construction of each building are highly significant in Buddhism with each component part taking on spiritual meaning.

Comparison between Bagan archaeological site and the other significant archaeological gem of Southeast Asia, the Angkor sites, Angkor ruins are hidden beneath curtains of forests. On the other hand, Bagan is exposed to the next attraction close and visible at hand.

What makes the temples look romantic is the process of graceful ageing. The barren, desert-dry mountain range to the west past the river, spinning occasional micro twisters that spawn loose dust particles everywhere from the eroded earth to the structures. This phenomenon had peeled off so much the stucco coating of the temples to reveal the brick structural blocks with its rusty, reddish, and sometimes golden brown-like patina when hit by the sun’s rays.

Erosion is a significant threat to this area, not only the wind chipping away the buildings’ plastering but also water from the mighty Ayeyarwady River threatens the riverbanks. The strong river current has already washed away half of the area of Old Bagan. It used to be a rectangular-shaped piece of enclave protected by a perimeter wall. Now what remains is roughly the triangular eastern half part.

Bagan became a central powerbase in the mid 9th century under King Anawratha, who unified Burma under Theravada Buddhism. It is estimated that as many as 13,000 temples and stupas once stood on this 42 sq km plain in central Myanmar, and Marco Polo once described Bagan as a “gilded city alive with tinkling bells and the swishing sounds of monks’ robes”.

Approximately 2,200 remain today, in various states of disrepair. Some are large and well maintained, such as the Ananda Pahto, others are small tumbledown relics in the middle of overgrown grass. All sites are considered sacred, so when visiting, be respectful including removing shoes as well as socks before entering or stepping onto them.

Bagan‘s golden age ended in 1287 when the Kingdom and its capital city was invaded and sacked by the Mongols. Its population was reduced to a village that remained amongst the ruins of the once larger city.

In 1998, this village and its inhabitants were forcibly relocated a few kilometres to the south of Bagan, forming “New Bagan” where you will find accommodation in its handful of cheap, quaint, clean hotels and religious centres.

Despite the majesty and importance of Bagan, UNESCO did not include it on its World Heritage Site, because it says some temples were rebuilt in an un-historic way. Nonetheless, the site is arguably as impressive as the Pyramids of Egypt: a dry, vast open landscape dominated entirely by votive architecture.

All temple signs are written in Burmese. Only a selected few are in English, and if there is, it’s written at the back of the sign. The three basic building blocks of typical Bagan temples are stupa, block base, and vestibule.

For lovers of the beauty of Bagan, each structure has its own distinct personality. Just as what the French architect Pierre Pichard who inventoried the 2,834 structures in 8 thick volumes in 1996 described the whole menagerie, “a balance between uniformity and diversity”, is achieved. Bagan architects mixed and matched prominent and subtle features but toed the line while nature enhanced it in over 1000 years of construction, depreciation, and renovation.

Although it’s not as bad as Angkor Wat (yet), the place is pretty crowded and popular with tour groups. To avoid it a bit it’s advisable to visit between 6-8 AM (you’ll have most places to yourself, except the ones which are also popular around sunset) or between 13-15 PM (when most tour groups will have their lunch). Around sunset (17-18 PM) most places will be free of tour groups, expect the popular sunset watching temples. Those places will be deserted between 15-16 PM, which is an excellent time to visit.

The best footwear to go about in this site is a pair of plastic slippers, flip-flops or crocs. It is easy to slip on and take off as one hop from one temple to another.

If you are using a bike for your personal tour, when you leave it by the gate, it is 100% assured that your bike will still be there when you get back. Bagan is a family-village setting and anyone who does harm to anybody will surely be known and humiliated, if not prosecuted. Being Asians, Myanmar people value face-saving as important.

These are the important temples recommended by all tourist maps and agencies:

Ananda Temple – Bagan‘s holiest temple, built by the third king, Kyan-zit-that in 1091. Ananda comes from the Pali word “anantapannya“, which means “boundless wisdom”. The temple houses four Buddhas facing the cardinal directions, which represent the four Buddhas who have attained Nirvana. The fifth, Maitreya, is yet to appear. This is the most important temple in all of Bagan.

Shwesandaw Temple – This is the “sunset temple”, where foreign and Burmese tourists alike gather every evening to view the spectacular Bagan sunset. There are many peddlers around the temple selling T-shirts, drinks and souvenirs. The climb up is a reasonably easy 5-minute walk up a flight of stairs, but the steps get narrower and steeper near the top. Not recommended for those with vertigo, but if you can make the climb, you will be rewarded with a breathtaking sunset as the temples and landscape are set ablaze in golden sun rays.

Shwe Zigon Temple – This gourd-stupaed golden pagoda is the first and prototype monument (including for the iconic Shwedagon Pagoda of Yangon) built in Myanmar style in 1087.

Shwegugyi Temple – Commissioned by King Alaunsithu in 1131, one of the most intact temples in the site that needs a little less of imagination to appreciate Bagan‘s olden days.

Dhamma Yangyi Temple – Commissioned by King Narathu to atone for his sins of assassinating his father, brother, and wife. The eccentricity of this king is reflected in the building’s finely set brickwork (it was noted that he executed a bricklayer for his not too perfect masonry work – gaps are too wide) and its unfinished construction (work abandoned after he himself was assassinated). These generate so many riddles and mysteries that lead to being known as ghost haunted temple for some inhabitants. From estimates, there were roughly 6 million pieces of bricks used in the construction of this temple.

Shwezigon Pagoda – on the North bank of Nyaung U, this is one of the most important pagodas in all of Myanmar that was built the 11th century and served as the original model for the pagoda of the same name in Yangon.