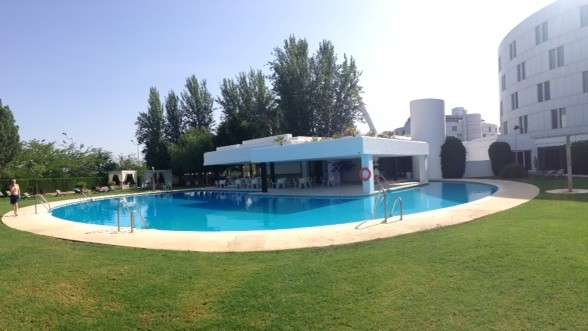 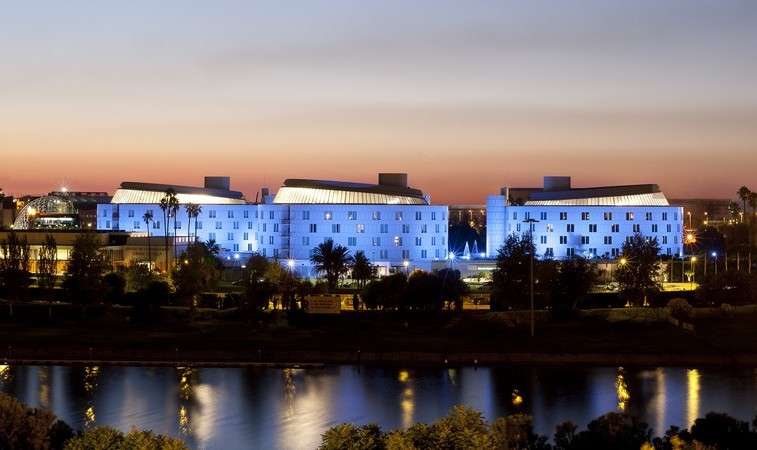 Barcelo Sevilla Renacimiento is a very nice stylish and modern hotel with an excellent size pool, something you won’t find in the city centre of Seville.

Found me at this hotel after mechanical faults and we were unable to depart on the night, having been transferred by the airline in the late hours and greeted with some sandwiches and snacks, our check-in was quick considering the stranded passengers arriving.

The hotel is stylish but not in the city centre, something to consider if being in the heart of the city really matters. However, this location offers bigger rooms and a fantastic pool to dip and cool off in what is extreme heat of summer. Next door to the hotel is Isla Magica, a theme park/water park, but we were on airline time and unable to check it out. A taxi to the centre isn’t expensive.

I found the Barcelo Sevilla Renacimiento hotel to be overly spacious, walking to rooms can take some time as there are three buildings. However, a taxi to Seville city centre isn’t much, considering it is best explored on foot, the advantage of this hotel is it has the space that compact hotels in the centre don’t, such as the large outdoor swimming pool.

It is a nice hotel if you don’t mind being away from the center of historic Seville. This smart, 5-star hotel is set in 3 contemporary buildings on Isla de Cartuja, a 5-minute drive from Seville’s city centre. It features a seasonal outdoor pool and gardens, 200 yards from the Isla Magica Theme Park.

A buffet breakfast is served in the Colon restaurant at Barceló Renacimiento, which I admit was rather good.