Boudhanath has been an important place of pilgrimage and meditation for Tibetan Buddhists & local Nepalis For centuries. UNESCO World Heritage since 1979.

The ancient Buddhist stupa of Boudha dominates the skyline and is the largest in Asia.

Throughout the day pilgrims can be seen circumambulating the structure chanting mantras. Maroon clad Tibetan Buddhist monks & nuns can be seen walking around Boudha.

As a daily ritual, many people walk three or more times around the stupa while repeating the mantra ‘Om Mani Padme Hum’ either quietly or aloud.

Circumambulate. Walk around the stupa clockwise and spin the prayer wheels clockwise. This is the main activity of pilgrims & many tourists. One lap is approx. 150 meters. 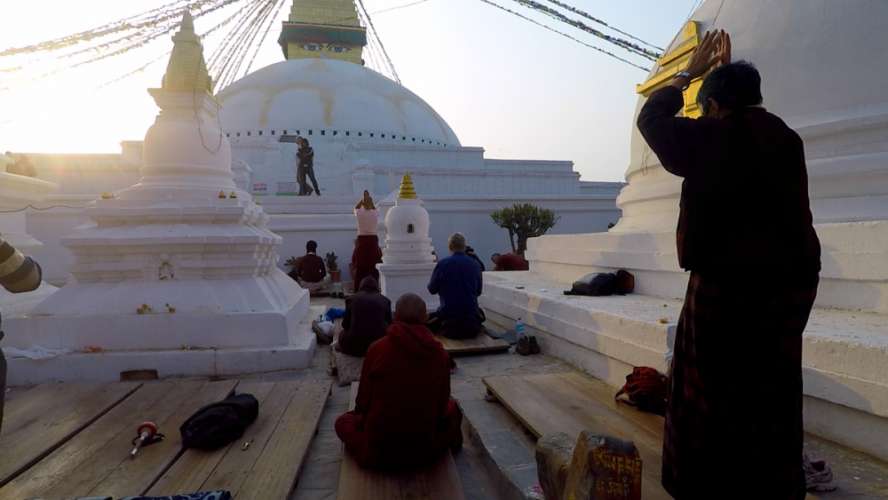 According to legend, Boudhanath Stupa was built during the 5th century AD, by an old poultry woman who asked the king for land to construct a shrine to the Buddha. The king agreed, and offered her as much land as she could cover with the skin of a water buffalo. The woman proceeded to cut a buffalo hide into thin strips, and placed them end to end to form a huge circumference. The king realised that he had been tricked by the old woman, but he adhered to his word, and the stupa was constructed according to these dimensions.

The Stupa is on the ancient trade route from Tibet which enters the Kathmandu Valley by the village of Sankhu in the northeast corner, passes by Boudnath Stupa to the ancient and smaller stupa of Cā-bahī (often called ‘Little Boudnath’). It then turns directly south, heading over the Bagmati river to Patan – thus bypassing the main city of Kathmandu, which was a later foundation.

Tibetan merchants have rested and offered prayers here for many centuries. The Stupa is said to entomb the remains of Kassapa Buddha.

Boudhanath is fascinating and spiritual.