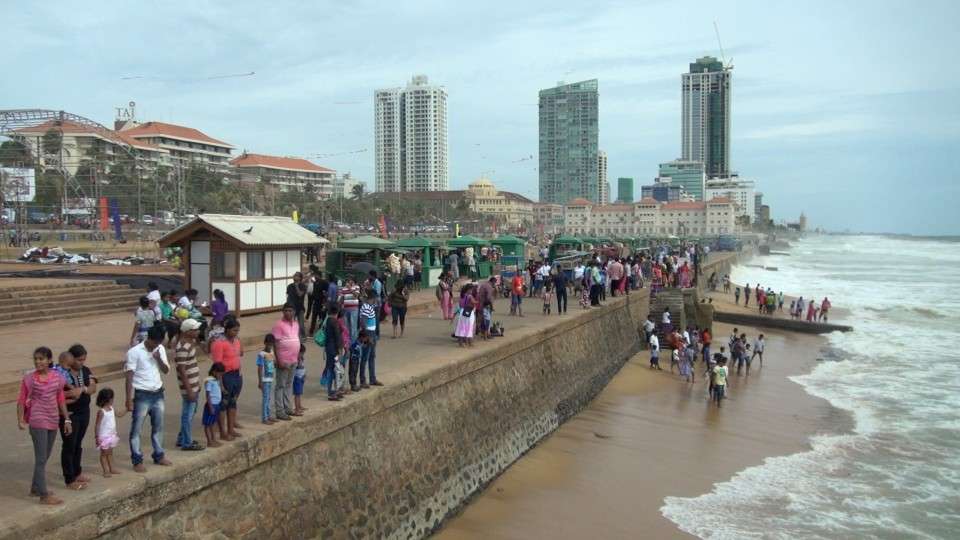 With a tropical climate all year, any time is suitable to travel to Colombo – the commercial and financial capital of Sri Lanka.

First appearances show that Colombo is changing. A development plan is underway with improvements to build the Colombo Port City and other huge developments. The city of Colombo I visited in 2015 will drastically change to the one that will eventually emerge after 2020 – as Sri Lanka is investing heavily for the future.

Colombo is the commercial capital and largest city of Sri Lanka, and the financial centre of the island, often referred to as the capital since Sri Jayawardenepura Kotte is within the urban area of, and a satellite city of Colombo, a busy and vibrant place with a mixture of modern life and colonial buildings and ruins. It was the legislative capital of Sri Lank until 1982.

Due to its large harbour and its strategic position along the East-West sea trade routes, Colombo was known to ancient traders 2,000 years ago. It was made the capital of the island when Sri Lanka was ceded to the British Empire in 1815, and its status as capital was retained when the nation became independent in 1948. In 1978, when administrative functions were moved to Sri Jayawardenepura Kotte, Colombo was designated as the commercial capital of Sri Lanka.

The name “Colombo“, first introduced by the Portuguese in 1505, is believed to be derived from the classical Sinhalese name කොලොන් තොට Kolon thota, meaning “port on the river Kelani”. Another belief is that the name is derived from the Sinhalese name කොල-අඹ-තොට Kola-amba-thota which means “Harbour with leafy mango trees”.  The author of the oldest Sinhalese grammar, Sidatsangarava, written in the 13th century wrote about a category of words that exclusively belonged to early Sinhalese. It lists naramba (to see) and kolamba (ford or harbour) as belonging to an indigenous source. Kolamba may also be the source of the name of the commercial capital Colombo.

Galle Face Green at sundown for a spectacular view, as long as the sky is clear enough. The promenade stretches 13 acres between Galle Road and the Indian Ocean and is a popular destination for tourists and residents alike. The Galle Face Hotel is a historic landmark on the southern edge of this promenade. The hotel has played host to distinguished guests including the British Royal Family and other royal guests and celebrities. In the evenings Galle Face Green plays host to families and children playing sports and flying kites. There are numerous small food stalls and a small stretch of beach. The green was recently given a makeover and since then has been even more popular with the local community.

Gangaramaya Temple is one of the most important temples in Colombo. The temple’s architecture demonstrates an eclectic mix of Sri Lankan, Thai, Indian, and Chinese architecture.

The Viharamahadevi Park (formerly Victoria Park) is an urban park located next to the National Museum of Colombo and the Town Hall. It is the oldest and largest park in Colombo and features a large Buddha statue.

As part of the Urban Regeneration Program of the Government of Sri Lanka, many old sites and buildings were revamped to modern public recreational spaces and shopping precincts. These include Independence Memorial Hall Square, Pettah Floating Market and Old Dutch Hospital among others.

Colonial buildings influenced by the Portuguese, Dutch and British exist alongside structures built in Buddhist, Hindu, Islamic, Indian and Contemporary architectural styles. No other place is this more evident in the Fort area. Here one may find new towering skyscrapers as well as historic buildings dating far back as the 1700s.

The Fort district has the famous Cargills & Millers complex that is protected by a special government law from demolition. This is done mainly to preserve the historic beauty of the Fort area. Cannons that were once mounted on the rampart of the old fort of Colombo laid out for observance and prestige at the Green, giving a colonial touch to the city.

Colombo is like most other South Asian capitals, it is not as dangerous as one would think. Many first time travellers to Colombo find themselves falling victim to scams and touts. Be on guard for anybody trying to help you by giving you unsolicited directions or travel advice. Take any advice from taxi and auto drivers with a grain of salt, especially if they tell you the place you want to go to is closed, dangerous, non-existent etc. Often I would be told about a special event, such as a Buddhist festival that was ‘only today’ – just be firm and ignore or announce you are not interested. If you are a first time visitor to Sri Lanka, don’t admit it as it will make you a target for the scam artists.

In 2015, Colombo is a city where works are underway almost everywhere, with ambitious plans and development.  From Colombo getting to any part of Sri Lanka is easy, as the main hub, and a train ride is a must, as I did when I travelled to the historic city of Galle in the south.