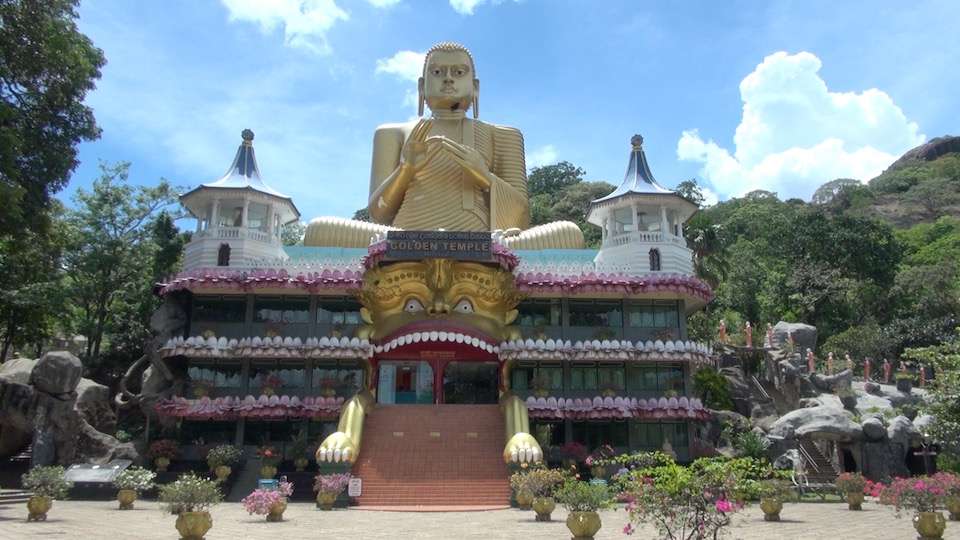 Dambulla Cave Temple, also known as the Golden Temple of Dambulla is a UNESCO World Heritage since 1991. It is the largest and best-preserved cave temple complex in Sri Lanka.

A sacred pilgrimage site for 22 centuries, this cave monastery, with its five sanctuaries, is the largest, best-preserved cave-temple complex in Sri Lanka. The Buddhist mural paintings are of particular importance, as are the 157 statues.

Dambulla is situated 148 kilometres (92 mi) east of Colombo and 72 kilometres (45 mi) north of Kandy, situated in the central part of Sri Lanka. The Golden Buddha statue just downhill from the Cave temple itself marks the entrance as Dambulla Golden Temple, and it feels more like a theme park than a sacred place on first appearance.

The rock towers 160 m over the surrounding plains. There are more than 80 documented caves in the surrounding area. Major attractions are spread over five caves, which contain statues and paintings. These paintings and statues are related to Gautama Buddha and his life. There are a total of 153 Buddha statues, three statues of Sri Lankan kings and four statues of gods and goddesses. The latter include Vishnu and the Ganesha. The murals cover an area of 2,100 square metres (23,000 sq ft). Depictions on the walls of the caves include the temptation by the demon Mara, and Buddha’s first sermon.

Prehistoric Sri Lankans would have lived in these cave complexes before the arrival of Buddhism in Sri Lanka as there are burial sites with human skeletons about 2700 years old in this area, at Ibbankatuwa near the Dambulla cave complexes.

This temple complex dates back to the first century BCE. It has five caves under a vast overhanging rock, carved with a drip line to keep the interiors dry. In 1938 the architecture was embellished with arched colonnades and gabled entrances. Inside the caves, the ceilings are painted with intricate patterns of religious images following the contours of the rock. There are images of the Lord Buddha and bodhisattvas, as well as various gods and goddesses.

Conservation at the Dambulla Temple Complex has primarily concentrated on the preservation of its mural schemes and have focussed on maintaining the integrity of the existing complex which has remained unaltered since the reconstruction the temple veranda in the 1930s.

As the Dambulla Temple remains an active ritual centre, the conservation plans of the 1982-1996 project were directed at improving the infrastructure and accessibility of the site in accordance with its UNESCO world heritage status. This involved the renovation of hand-cut paving within the complex and the installation of modern lighting. Further investment in the Temple’s infrastructure has seen the construction of a museum and other tourist facilities located away from the historical complex.

More recent inspections by UNESCO in 2003 have proposed an expansion to the existing protected zone around the complex in order to minimise damage to surrounding archaeological features.

The temple is composed of five caves, which have been converted into shrine rooms. The caves, built at the base of a 150m high rock during the Anuradhapura (1st century BC to 993 AD) and Polonnaruwa times (1073 to 1250), are by far the most impressive of the many cave temples found in Sri Lanka. Access is along the gentle slope of the Dambulla Rock, offering a panoramic view of the surrounding flatlands, which includes the rock fortress Sigiriya, 19 km away.

The largest cave measures about 52m from east to west, and 23m from the entrance to the back, this spectacular cave is 7m tall at its highest point. Hindu deities are also represented here, as are the kings Valagamba and Nissankamalla, and Ananda – the Buddha‘s most devoted disciple.

Within this shrine, rooms are representative of many epochs of Sinhala sculpture and Sinhala art. The Buddha statues are in varying sizes and attitudes – the largest is 15 meters long. One cave has over 1,500 paintings of Buddha covering the ceiling.

Cave of the Divine King

The first cave is called Devaraja Lena (Lena in Sinhalese meaning cave), or “Cave of the Divine King.” An account of the founding of the monastery is recorded in a 1st-century Brahmi inscription over the entrance to the first cave. This cave is dominated by the 14-meter statue of the Buddha, hewn out of the rock. It has been repainted countless times in the course of its history, and probably received its last coat of paint in the 20th century. At his feet is Buddha’s favourite pupil, Ananda; at his head, Vishnu, said to have used his divine powers to create the caves.

Cave of the Great Kings

In the second and largest cave, in addition to 16 standing and 40 seated statues of Buddha, are the god’s Saman and Vishnu, which pilgrims often decorate with garlands, and finally statues of King Vattagamani Abhaya, who honoured the monastery in the 1st century BC., and King Nissanka Malla, responsible in the 12th century for the gilding of 50 statues, as indicated by a stone inscription near the monastery entrance. This cave is accordingly called Maharaja Lena, “Cave of the Great Kings.” The Buddha statue hewn out of the rock on the left side of the room is escorted by wooden figures of the Bodhisattvas Maitreyaand Avalokiteshvara or Natha. There is also a dagoba and a spring which drips its water said to have healing powers, out of a crack in the ceiling. Valuable tempera paintings on the cave ceiling dating from the 18th century depict scenes from Buddha’s life, from the dream of Mahamaya to temptation by the demon Mara. Further pictures relate important events from the country’s history.

The third cave, the Maha Alut Vihara, the “Great New Monastery” acquired ceiling and wall paintings in the typical Kandy style during the reign of King Kirti Sri Rajasinha (1747–1782), the famous Buddhist revivalist. In addition to the 50 Buddha statues, there is also a statue of the king.