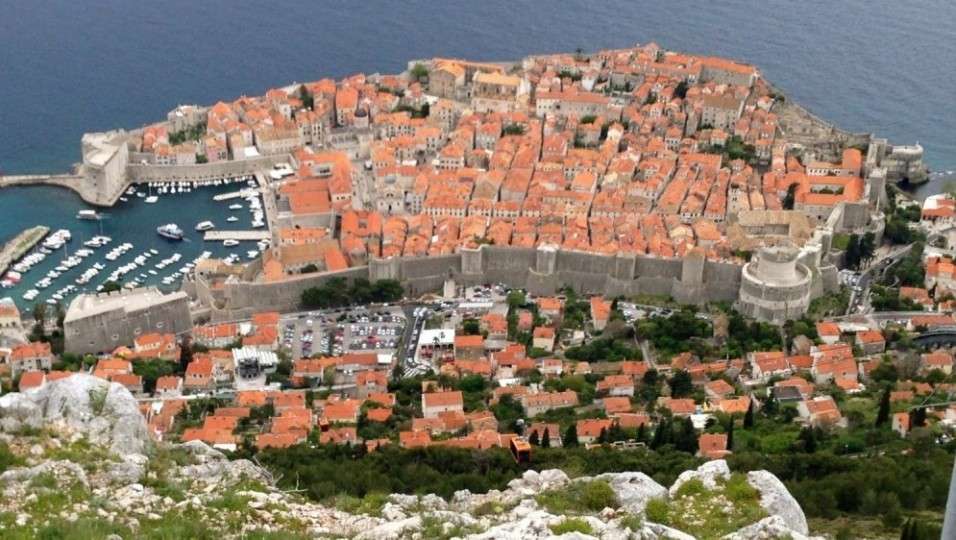 Dubrovnik is an old city on the Adriatic Sea coast in the south of Croatia, nicknamed “Pearl of the Adriatic” and is listed as a UNESCO World Heritage Site since 1979.

Dubrovnik is among the 10 best medieval walled cities in the world. The city is completely pedestrianised and easily small enough to get around on foot, with some of the streets are a little steep and many stairs to climb. Steeped in stunning architecture and sculptural detail, and boasts spectacular churches, monasteries, museums, and fountains.

As early as the 19th century, it was discovered by celebrities as a place to be seen. Royalty, presidents and diplomats have all favoured the city. The late Pope John Paul II was a fan of Dubrovnik and was even made an honorary citizen.

Although Dubrovnik was demilitarised in the 1970s to protect it from war, in 1991, after the breakup of Yugoslavia, it was besieged by the Yugoslav People’s Army (JNA) for seven months and received significant shelling damage. Dubrovnik was heavily bombed during the Croatian War of Independence from 1991 to 1995, but almost all of the damage has been repaired, if you look closely around the old town, mortar damage in the cobblestone streets and bullet marks in the stone houses are visible.

The city of Dubrovnik was built on maritime trade. In the Middle Ages, it became the only city-state in the Adriatic to rival Venice. Supported by its wealth and skilled diplomacy, the city achieved a remarkable level of development during the 15th and 16th centuries. It managed to survive many centuries, with constant threats to its territory, particularly from the mighty Ottoman Empire and Venice.

Dubrovnik is surrounded by City Walls which are 2 km long and for which it is famous all around the world. Walk on the walls around the old town for great views. Through the history City Walls were protection from the enemy, today Dubrovnik City Walls brings the visitors from the whole world who want to see this city- museum.

Though small enough to see in a day there are also small islets and islands to visit nearby, with Lokrum just a small boat ride away with parkland and rock beaches. A hiking path leads you from the base of Dubrovnik to the top of the hill where the Cable Car also runs, stop and take in the view from on top of the world for a wide view of the area and enjoy a drink at the small bar that sits on top.

I wasn’t fortunate with the weather during my visit in April but didn’t lessen the wonder and magic of this living museum. Dubrovnik is unspoiled with commercialism and remains unbranded by top shops or familiar brand names, instead kept and preserved as an ancient town with modern conveniences. However during the day, the Old Town can feel crowded with the masses of tour busses and cruise ships that stop to take a look, but when they leave the town returns to a pleasant place to wander after the crowds.

Discover little alleyways used as outdoor terraces and where small restaurants expand. This being a seaside town, the main staple is seafood, and fresh catch of the day always comes tops on menus.

“Those who seek paradise on Earth should come to Dubrovnik and find it.”

At first, I was concerned about the size of the city vs the 3 days I had planned here, but there were enough activities to keep me busy and interested. I will return to Dubrovnik at a better time of year, from what I saw, this could be my new summer destination.

Roland’s Column, (in front of the Bell Tower). A slender stone flag staff of the legendary knight. Also known as Orlando’s Column.

Bell Tower, (after the Ploče entrance to the city). On top of the tower is the famous ‘Zelenci’ (The Green Ones), bronze statues which strike the gigantic bell every hour. They have been recently replaced with copies and the originals are in the atrium of the Sponza Palace.

Sponza Palace, (West of the Bell Tower). Gothic Renaissance palace, one of the few buildings that have maintained its form from before the catastrophic 1667 earthquake.

Rector’s Palace. Formerly the palace of the Major Council now houses a museum dedicated to the city’s history.

Pile Gate, at the western end of the Placa Thoroughfare (Old town). A convenient starting place for your stroll through the Old Town is the Pile Gate. Before entering the Old Town, Fort Lovrjenac, the first among many sites worth seeing in Dubrovnik, provides a good view of the Old Town and its wall.

The Stradun (Placa) is the central street of the city of Dubrovnik and is the place where the old city comes to life.

Big Onofrio´s Fountain. In the western (Pile) entrance of the old town, The fountain stairs are nowadays a favourite meeting place for local youth and where both the tourists and pigeons take rest and refresh themselves with cool water.

Old Port. The eastern part of the Old Town of Dubrovnik; some cruise ship passengers are tendered to the Old Port.

Fort Lovrijenac. The monumental fort rises above 37 m high rock. It changed roles in the course of history. The main purpose of its construction was defence, and the main idea was to protect the freedom of Dubrovnik.