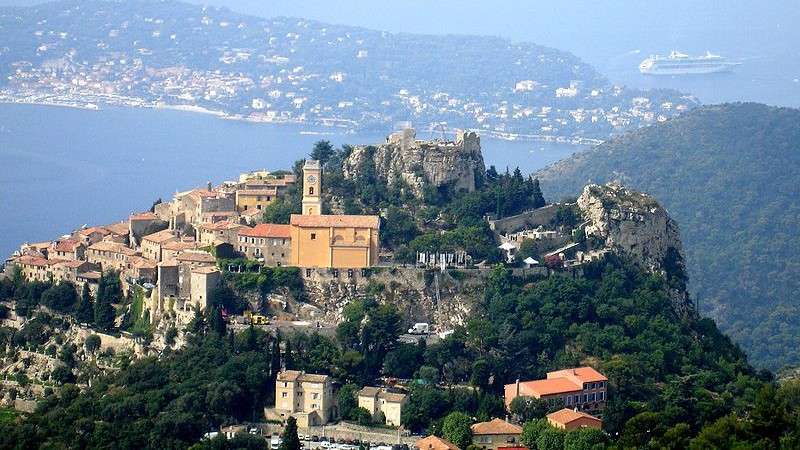 Described as an “eagle’s nest” because of its location overlooking a high cliff located 427m above sea level on the French Mediterranean. Highly recommended, Èze is a medieval village with its narrow lanes at the top of a hill overlooking the sea.

Èze is a commune in the Alpes-Maritimes department in south-eastern France, not far from the city of Nice. First populated around 2000 BC as a commune situated near Mount Bastide. The area was subsequently occupied by not only the Romans but also the Moors who held the area for approximately 80 years until they were driven out by William of Provence in 973.

By 1388 Èze fell under the jurisdiction of the House of Savoy, who built up the town as a fortified stronghold because of its proximity to Nice. The history of Èze became turbulent several times in the next few centuries as French and Turkish troops seized the village under orders from Barbarossa in 1543, and Louis the XIV destroyed the walls surrounding the city in 1706 in the war of succession of Spain. Finally, in April 1860, Èze was designated as part of France by unanimous decision by the people of Èze.

The high elevation enables the village and the light ochre church within, Notre Dame del’Assomption built-in 1764, to be seen from afar. Inside the church, an Egyptian cross acts as a reminder that the roots of the village date back to the time of the Phoenicians, when they erected a temple there to honour the goddess Isis.

It is home to the Jardin Botanique d’Èze, known for its collection of cactus and succulents as well as its panoramic views. It is said Walt Disney spent a significant amount of time in Èze. The oldest building in the village is the Chapelle de la Sainte Croix and dates back to 1306.

A small medieval village is famous for its beauty and charm. It has many shops, art galleries, hotels and restaurants. As a result, Èze has become a “museum village”, few local residents live here. The motto of the village is the phrase: “Isis Moriendo Renascor”, meaning “In death I am Reborn”, its emblem is a Phoenix perched on a bone.

Nearby is a perfume factory, Fragonard, where one learns the production techniques of creating scents and the secrets and of being a Nose.