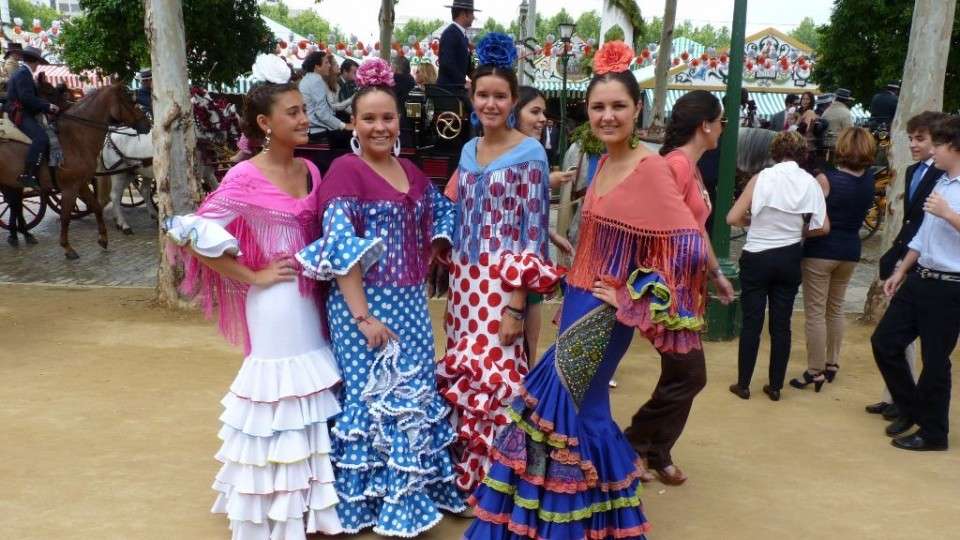 The fair, Feria de Seville, dates back to 1847 when originally it was a livestock fair. It runs for six days. Each day the fiesta begins with the parade of carriages and riders.

For the duration of the fair, the fairgrounds are covered in rows of casetas, individually decorated marquee tents that belong to prominent families of Seville, some groups of friends, clubs, trade, associations or political parties.

From around nine at night until six the following morning, crowds dance partying and dancing ‘Sevillanas‘, drinking Jerez sherry or manzanillo wine and eating tapas. Try the so-called ‘rebujito’, a combination of manzanilla with a lime soft drink and a touch of mint – though in the midday heat, can be potent.

La Feria of Abril is accompanied by men and women dressed up, in their traditional ‘traje corto’, a short jacket, tight trousers and boots for men, and the “faralaes” or “trajes de Flamenca”, flamenco-style dress for women. The men traditionally wear hats called “cordobés”.

The main entrance, or gates, are decorated and designed differently each year, three arches and a middle one, should be seen at daytime and night time when it is completely lit up.

It is a colourful event of colour, lights, celebration, feasts, and social meetings. An event that is both day and night, and for some far too much after a week of celebrations.

There is something odd about how this video is playing on my page, however, plays clearly on YouTube – but why the strangeness?