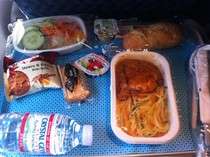 I wasn’t fortunate enough to experience the updated interiors and entertainment, inflight wifi and in seat power, instead I flew on a 777-200 with many unoccupied seats and was disappointed by expectations.

Sure there was back of seat screens for watching movies, but not on demand. Two and a half hours into the flight have been served lunch, in plastic trays, forks and knife, cellophane enclosing a simple salad, chicken and broken bits of spaghetti, though edible, it’s presentation fell well below what you might get at a fast food outlet. Alcohol is available for purchase onboard, no cash accepted.

Midway through flight cheese flavoured crackers and drinks were offered and about one and a half hours before landing a hot deep dish pizza was served.

It all started right, from check-in to lounge and boarding, the service has been attentive and polite. American Airlines is pushing the ‘new’ a lot in its ads and online, what I experienced was mediocre. Flying in economy on American Airlines didn’t exactly make me want to fly with them again.

Oh well, there is still the return flight to be had. Will I be so lucky?