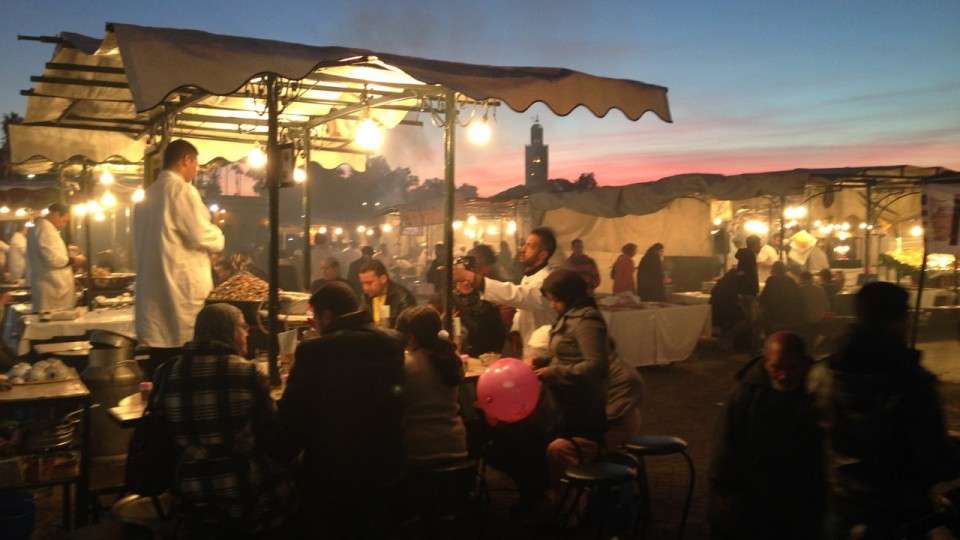 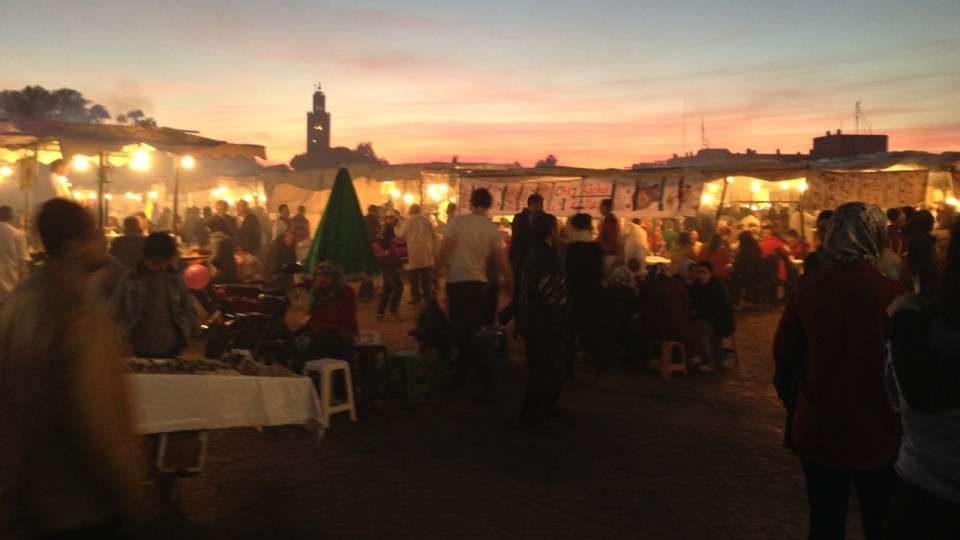 Jemaa el-Fnaa, the open square in the middle of the medina of Marrakech features dancers, storytellers, teeth pullers and snake charmers, and other entertainers in what really is an outdoor circus of weirdness.

An awkward feeling of amazement and disgust, theatre and strange acts, and some very uncomfortable animal handling. Children, as young as 8 years old, box each other as a human ring of observers gather to bet and watch the fight and cheer on for a win. Requests for donations or payments are often but any attempt to record the event with a camera is almost guaranteed harassment for payment for the privilege of getting the shot.

In the evening the square fills with food stalls and open outdoor restaurants and smoke and smells fill the air along with the sounds of drums and wind instruments, an outdoor show that resembles an open-air circus of acts all competing for your attention and monetary gifts.

Displaying any interest, be it watching belly dancing, getting your picture taken with a chained Barbary ape, or costumed performers means dropping some sort of appreciation (dirham) into an open hat held in point-blank view.

The best way to take in the show is from one of the many rooftop terraced restaurants, though many state mandatory purchase is required, it is not really enforced. If asked, a few dirhams will be enough for the waiter as a small bribe.

Souks and shopping can be found in any direction from the square, in what is essentially the centre of the medina, today this sprawling square is an assembly point for Marrakech life. Narrow streets lead into the alleys of the medina quarter, the old city.

BEWARE: As the day progresses, the entertainment on offer changes: the snake charmers depart, and late in the day the square becomes more crowded, with Chleuh dancing-boys (it would be against custom for girls to provide such entertainment), story-tellers (telling their tales in Berber or Arabic, to an audience of appreciative locals), magicians, and peddlers of traditional medicines. As darkness falls, the square fills with dozens of food-stalls as the number of people on the square peaks. Clouds of charcoal smoke rise from the griddles of makeshift kitchens, set up here each evening to cook everything from kebabs of kefta or merguez sausages to boiled sheep heads.