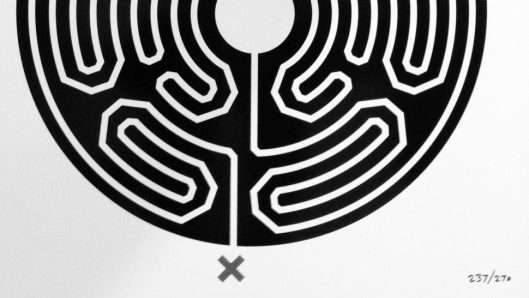 LONDON Underground Labyrinth – an artwork commissioned for London Underground to celebrate its 150th anniversary,  installed in every one of the Tube’s 270 stations. The location of the artworks is different at each station, whether in the ticket hall or on the platform, encouraging people to seek them out.

The artwork created by contemporary artist Mark Wallinger, wishes to forge a link with the Tube’s rich history of graphic language, a work that sits comfortably alongside the two of its major design icons, the roundel and Harry Beck’s Tube map, and yet stands out as a new symbol marking the Tube’s 150th year.

The 270 individual artworks, one for each station on the network. Rendered in bold black, white and red graphics, the artworks are produced in vitreous enamel, a material used for signs throughout London Underground, including the Tube’s roundel logo, which also echoes the circular labyrinth design. Positioned at the entrance of each labyrinth is a red X. This simple mark, drawing on the language of maps, is a cue to enter the pathway. The artwork invites the viewer to trace the route with a finger, and to understand the labyrinth as a single meandering path into the centre and back out again – a route reminiscent of the Tube traveller’s journey.

The symbol bears a strong resemblance to the two hemispheres of the brain. In this context, it could stand for the contemplative or mental space that travellers enter into on the Tube, an invitation for one’s imagination to wander into the heart of the labyrinth.  For Wallinger, the labyrinth is a fitting analogy for the millions of journeys that are made across the Tube network every day.

Each of Wallinger’s Labyrinth artworks bears a different number, written in the artist’s hand, and they refer to the order of stations visited in the Guinness World Record ‘Tube Challenge’ 2009, the record for the fastest time taken to pass through every single station on the London Underground network.

The challenge is to seek and find each of the installed artworks at the 270 stations. The one above is located at the High Street Kensington on the Edgware Road bound platform. If you do find one, snap a pic and share in the comments below.