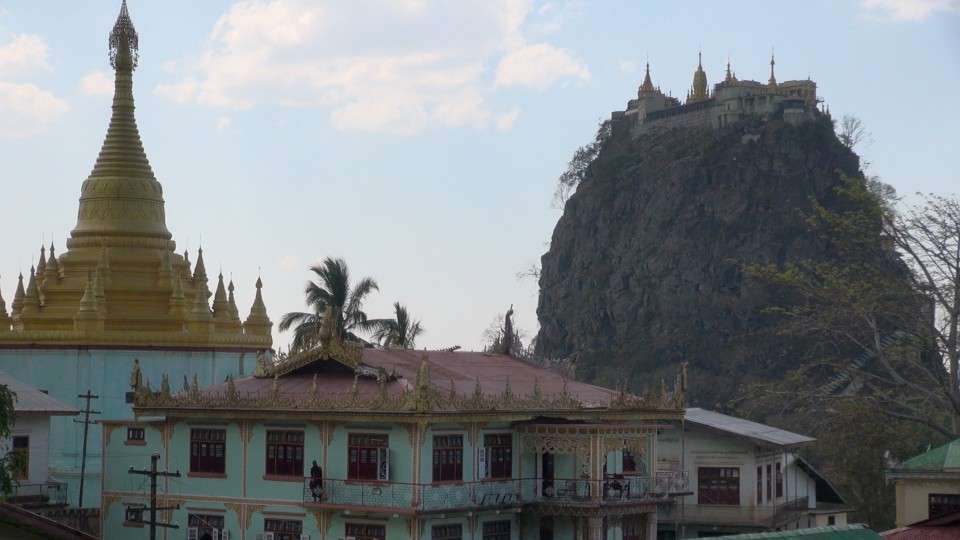 Mount Popa is a volcano 1518 metres (4981 feet) above sea level and located in central Myanmar, perhaps best known as a pilgrimage site, with numerous Nat temples and relic sites atop the mountain.

Fifty kilometres southeast of Bagan in central Myanmar at the base of Mt Popa is a solitary peak, Taung Kalat, topped by gold stupas and a Buddhist monastery. The Popa Taung Kalat shrine is the favoured home of 37 Mahagiri Nats or animist spirit entities, statues of which can be found at its base. These spirits were once so important to the country’s early Kings that it was essential for them to consult the Nats before commencing their reign.

To reach the top, you need to remove shoes and socks and climb the 777 steps to the summit. Along the way is a multitude of monkeys expecting treats. Sometimes they can get a little aggressive so it’s recommended that you keep a tight grip on your possessions!

Popa means “flower” in Sanskrit and you will find bottled flowers that you can purchase as offerings at the temple.

The Taung Kalat pedestal hill is sometimes itself called Mount Popa and given that Mount Popa is the name of the actual volcano that caused the creation of the volcanic plug.

From the top of Taung Kalat, one can enjoy a panoramic view. One can see the ancient city of Bagan. The surrounding areas are arid, but the Mt Popa area has over 200 springs and streams. This means the surrounding landscape is characterized by prickly bushes and stunted trees as opposed to the lush forests and rivers Burma is famous for.  Plenty of trees, flowering plants and herbs grow due to the fertile soil from the volcanic ash. Prominent among the fauna are Macaque monkeys that have become a tourist attraction on Taung Kalat.

Mount Popa is considered the abode of Burma‘s most powerful Nats (spirit) and as such is the most important nat worship centre.

It is possible that the legends about Nats (spirits) represent a heritage of earlier animist religions, the worldview that non-human entities (animals, plants, and inanimate objects or phenomena) possess a spiritual essence, was syncretised with Buddhist religion in the 11th century. There are legends that before the reign of Bagan king Anawrahta (1044 – 1077) hundreds of animals were sacrificed here as a part of nat worship rituals.

One legend tells about brother and sister Mahagiri (Great Mountain) nats, from the kingdom of Tagaung at the upper reaches of the Irrawaddy, who sought refuge from King Thinligyaung of Bagan (344-387). Their wish was granted and they were enshrined on Mt Popa.

Another legend tells about Popa Medaw (Royal Mother of Popa), who according to legend was a flower-eating ogress called Me Wunna, she lived at Popa. She fell in love with Byatta, whose royal duty was to gather flowers from Popa for King Anawrahta of Bagan (1044–1077). Byatta was executed for disobeying the king who disapproved of the liaison, and their sons were later taken away to the palace. Me Wunna died of a broken heart and, like Byatta, became a nat. Their sons also became heroes in the king’s service but were later executed for neglecting their duty during the construction of a pagoda at Taungbyone near Mandalay. They too became powerful nats but they remained in Taungbyone where a major festival is held annually in the month of Wagaung (August).

Although all 37 Nats of the official pantheon are represented at the shrine on Mt Popa, in fact only four of them – the Mahagiri nats, Byatta and Me Wunna – have their abode here.

Many Burmese pilgrims visit Mt Popa every year, especially at festival season on the full moon of Nayon (May/June) and the full moon of Nadaw (November/December). Local people from the foot of Mt Popa, at Kyaukpadaung (10-miles), go mass-hiking to the peak during December and also in April when the Myanmar new year called Thingyan festival is celebrated. Before King Anawrahta’s time, hundreds of animals were sacrificed to the nats during festivals.

Burmese superstition says that on Mt Popa, one should not wear red or black or green or bring meat, especially pork, as it could offend the resident nats.

People travel great distances to assure good luck into the coming years to Mount Popa, host to an immense annual festival which actually takes place in the temple atop the mountain.

The festival involves a transgender medium being possessed by a nat spirit which give him the ability to communicate between the nats and the people.  It is these types of festivals, the type that is unique to the region but also incredibly important to the participants, that attracts tourists to Myanmar (Burma).