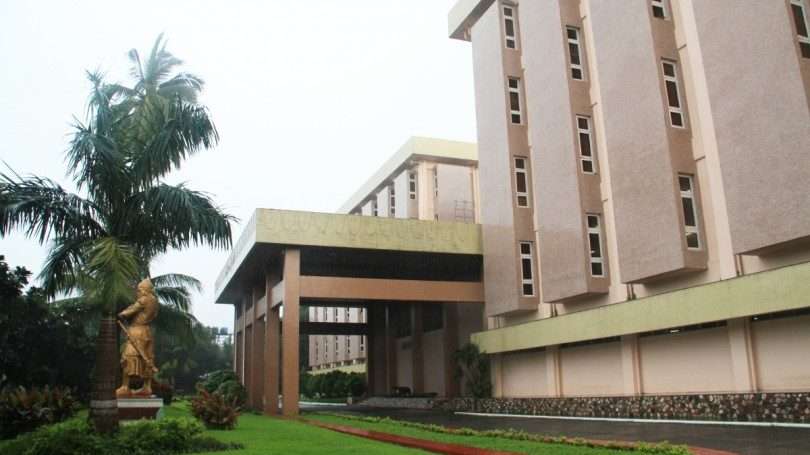 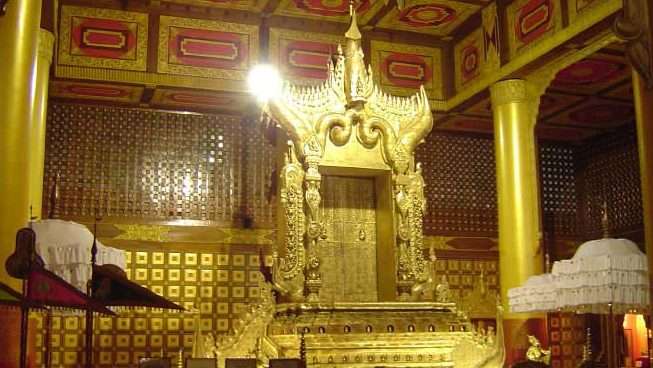 The National Museum of Myanmar in Yangon,  is the museum of Burmese art, history and culture in Myanmar. Founded in 1952, the five-story museum has an extensive collection of ancient artefacts, ornaments, works of art, inscriptions and historic memorabilia, related to history, culture and civilization of Burmese people.

An unimpressive building from the outside, and almost bare inside, with only one main item of interest, The Royal Throne of Myanmar, which has a dedicated room just to itself, but it is impressive.

The National Museum of the Union of Burma was first opened in June, 1952 at the Jubilee Hall Building on Shwedagon Pagoda Road, Yangon. The museum was moved to a larger location at 24/26 Pansodan Street in 1970, and to its present location in 1996. The new five-story National Museum has been open to the public since 18 September 1996.

The Lion Throne Show Room is the main exhibit. The Lion Throne is over 150 years old and made of Yamanay wood and gilded all over. There are 8 different kinds of thrones but in numbers, there are 9 thrones because two of them are similar. The Lion Throne was used by the King to adjudicate on law cases. Taken to Kolkata for display at the museum there is was returned to Myanmar after independence in 1948. This is the only throne left intact as the other 8 were destroyed during the Second World War.

The museum’s collections are displayed over 14 galleries or halls divided into Burmese culture and historic periods.

The Burmese Epigraphy and Calligraphy hall on the Ground Floor contains exhibits on the origins and development of Burmese script/alphabet throughout history, as well as exhibits on other ancient and ethnic scripts.

In the hall on culture are exhibits on Burmese rural life, covering social, economic and cultural traditions and modes of transport. Examples include a traditional Burmese bullock cart, still in use in many parts of the country, an offering bowl for monks, gilded and wrought with mosaics of semi-precious stones, and personal ornaments and jewellery worn by the Burmese people since ancient times.

The Halls of Arts covers the progress of the Burmese art, beginning with the cave paintings of from stone age to the Bagan, Innwa, Taungoo, Konbaung and Yadanabon periods to 20th-century contemporary art. The works of famous artists are on display.

In the Hall of Performing Arts are many musical instruments and an ornate saingwaing (traditional Burmese orchestra) as well as marionettes used in classical dramas and operas.

The Hall of Ethnic Culture on the Fourth floor shows national dresses and traditional artefacts of various ethnic groups of Myanmar.

The fourth floor of the museum consists of halls for the Buddha Images, dating back to the Pyu Period and up to the present day.

In the exhibit hall on Natural History are many fossils dating back millions of years, including a 40 million-year-old an anthropoid primate, found in the Pondaung region in Upper Myanmar.

The hall of Pre-historic Times houses a replica of the Padalin Cave, complete with its over 10,000-year-old stone age drawings, stone weapons of the neolithic period, and bronze weapons of a later age. The hall also has exhibits on Pyu period (1st-to-9th century) artefacts such as clay pots, urns, votive tablets and necklaces as well as those found in archaeological excavations at the ancient Pyu city of Sriksetra.

In the hall of Burmese History are exhibits on the pagodas, temples, monasteries and ordination halls of the Bagan Period and the marvellous murals of the Pinya, Innwa, Taungoo, and Konbaung periods. Rare ancient votive tablets with mouldings from scenes of the jataka stories are also on display.

The Throne Room houses miniature models of the eight kinds of thrones of ancient Burmese kings and the magnificent Royal Lion Throne of the last Burmese monarch King Thibaw in all its original majesty, used in Hluttaw Hall (or Hall of Council of Ministers).

The Yadanabon Period Exhibit hall has displays on clothing fashions, furniture and other household articles of the time such as a palanquin used by king Thibaw’s Chief Abbot.

Overall it isn’t spectacular and there is more floor space than exhibits with room practically empty. The draw for me was The Royal Throne of Myanmar which deserves a long look and has a dedicated hall just to itself. Unfortunately, pictures are not allowed.