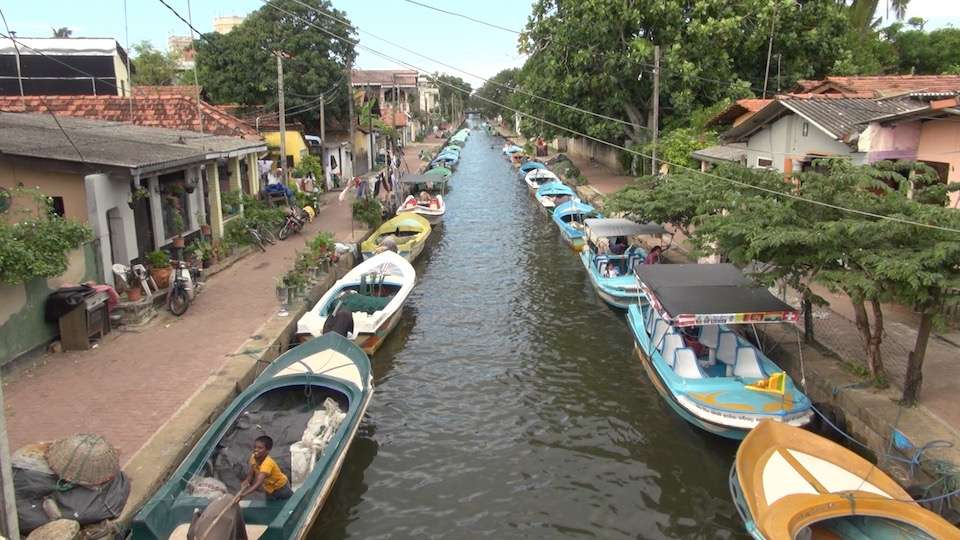 Located on the west coast of Sri Lanka at the mouth of the Negombo Lagoon, Negombo draws tourists who stopover on their way to or from the airport.

With quick access to and from the country’s main international Bandaranaike International Airport and also approximately 35 km north of Colombo, Negombo has some quiet stretches of beach which are maintained by the tourist hotels, while others are always busy with fishermen and their equipment.

Known for its huge and old fishing industry with busy fish markets and sandy beaches, Negombo is also home to the country’s second-largest fish market, also locally famous as being called the “Lellama (Lel-La-Ma)”, at the north end of the town’s lagoon. There are daily fish auctions, which give tourists a chance to meet the area’s fishermen, buy fish and even organise fishing trips into the lagoon and the ocean beyond.

The fishermen who are based at the Negombo lagoon live in abject poverty in shanty thatch palm villages along the water’s edge. They rely mainly on their traditional knowledge of the seasons for their livelihood, using outrigger canoes carved out of tree trunks and nylon nets to bring in modest catches from September through April. Their boats are made in two distinct forms, oruvas (a type of sailing canoe) and paruvas (a large, man-powered catamaran fitted with kurlon dividers), and are said to have originated in the islands off the Mozambican coast; they were brought to Sri Lanka by Portuguese traders in the 17th century.

For generations, the lagoon has provided the fishermen with a plentiful supply of crabs, shrimps, lobsters, cuttlefish and many of the native species of fish. The men are regularly forced to head out to the ocean to fish, often losing money in the chartering process. In recent years, the villagers have supplemented the income earned from fishing by collecting toddy, or palm sap, which is used to brew arrack.

A famous Buddhist temple, Agurukaramulla Raja Maha Viharaya, brings Buddhists from all over Sri Lanka to Negombo. Ornate interiors said to be hundreds of years old, the on-site monastery inhabited by youthful monks in orange robes. The visit to the temple is free, but at the end, a request for a donation will be made, you will be shown a guest book from people from all over the world and the amount they gave, strangely, zero’s have been added to make them appear like large amounts (most certainly altered), but a small amount will do.

Remnants of colonization include the Dutch fort built in 1672, as well as centuries-old Portuguese and Dutch houses, administrative buildings, Churches and the ceiling frescoes of St. Mary’s Cathedral.

The name “Negombo” was first used by the Portuguese; the Sinhala name Mīgamuva means the “Group of Bees”. It had been named a few centuries before in the ancient kings’ era. The army of King Kavantissa found bee honey in a canoe near the seashore, for Viharamahadeviwho was pregnant with the prince Dutugamunu. Because of this, the place was named “Mee-Gomuwa”.

The wild cinnamon that grew in the region around Negombo was said to be “the very best in the universe as well as the most abundant” and for centuries attracted a succession of foreign traders and colonial powers. The shallow waters of the Negombo Lagoon provided safe shelter for seafaring vessels and became one of the key ports from which the Singhalese kingdoms conducted external trade.

The first Muslim Arabs (the Moors) arrived in Ceylon in the seventh and eighth centuries and eventually came to dominate the east-western trade routes. Many chose to settle in the coastal areas and their legacy can be seen today; their descendants the Sri Lankan Moors remain the largest minority group in Negombo. The Moors’ long-held monopoly over the cinnamon trade and the circuitous and largely overland route by which it was transported to Europe and the Mediterranean added greatly to its cost and encouraged a Portuguese takeover in the late fifteenth and early sixteenth century.

Landing in the early 1500s, the Portuguese ousted the Moors, constructed a fort in Negombo and took over the trade of cinnamon to the West. It was during the Portuguese occupation that the Karawa or traditional fishing clan of Negombo embraced Catholicism almost without exception. So successfully were they converted that today Negombo is sometimes known as ‘Little Rome’ and nearly two-thirds of its population profess the Catholic faith.

The Portuguese restructured the traditional production and management of cinnamon and maintained their control over the trade for more than a century. The decline of their power began in the 1630s when warfare between the Portuguese and the Kingdom of Kandy reached a stalemate and the King of Kandy turned to the Dutch for help. The Dutch captured Negombo from the Portuguese in 1646 and negotiated an armistice with Portugal for ten years. The legacy of the Dutch colonial era can be seen in the Dutch Fort, constructed in 1672, a number of other buildings and the extensive canal system that runs 120 km from Colombo in the South, through Negombo to Puttalam in the north. The impressive canal network is still used, and outrigger canoes and modern water-craft ply this route daily, for trade and tourist purposes.

Throughout the eighteenth century, the demand for cinnamon from Ceylon outstripped the supply and the quality of cinnamon appears to have suffered. Other factors, including the continued hostility from the Kandian Government and a rival cinnamon trade from China, led to a 40% decline in the volume of cinnamon exported between 1785 and 1791. Despite attempts to clear land around Negombo and create cinnamon plantations, by the time the British commander Colonel Stuart took over the trade in 1796, it was clear that the industry was in decline. Poor policies put in place by Frederick North the first Governor of British Ceylon exacerbated the problem and by the 1830s commercial interests had moved elsewhere.

Following the British takeover of the Kingdom of Kandy in 1815, Negombo lost its strategic value as an outpost of Colombo, however, it continued to develop in commercial influence. The Negombo fishery was at the heart of the seafood trade in Ceylon and many migrant fishermen would arrive annually with the profits of their ventures going into the small but prosperous town. In 1907 Negombo was connected to the massive railway project that was linking the island together under British control and encouraging the growth of plantations in coconuts, tea and coffee.