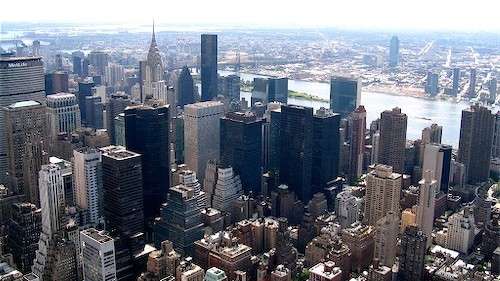 The Big Apple, New York City, the most populous city in the USA, a most important port and major financial centre, on the mouth of the Hudson River, comprising five boroughs: Manhattan, Bronx, Queens, Brooklyn and Staten Island.

My first visit to New York City, and though I was expecting a typical North American city found myself among something truly unique on this continent, like Hong Kong is to the east, New York is to the west.

Manhattan Island was much larger than expected, allow up to 3 days just to explore it, in a short time you will find that you will manage to find your way around Manhattan and see most sites on a reasonable time scale, however, I managed to do it in a day but I paid the price by being totally worn out by day three. Manhattan is an island 21.5km long and 3.7km wide (at its widest). Avenues run north and south, streets running east and west. Fifth Avenue divides Manhattan into the east side and west side. Sixth Avenue is known as the Avenue of the Americas.

Many New Yorkers in the service industries such as hotels, restaurants and transportation have tips factored into their wages, $1 for hailing a cab for the hotel doorman, porters and bellhops $1-2 per bag, maids $1-2 per day of your visit. Waitstaff, bartenders and taxi drivers, 15-20% of the total bill. Have your dollars ready, American money looks and feels the same, so check the denomination carefully.

I stayed in Midtown, centrally located to most attractions but everything is within reach is you can bear walking, though taxis are relatively cheap especially if its more than one person travelling. Within walking distance to Times Square, I found myself among a square filled with lights and adverts, commercialism had welcomed me to this grand city of New York. Impressed by the scale of the place.

My tour of New York took me from Midtown to Grand Central Station, east towards the United Nations and the mystery ball, with views of the Chrysler Building, towards Turtle Bay and Queensboro Bridge, and then west-ward to Central Park, a dream in such a high rise city to find a place so tranquil.

From Central Park, I walked south through the Theatre District and Times Square, past the Fashion Districttowards Chelsea (the gay mecca) and into Greenwich Village and Soho where the oldest parts begin, visiting Chinatown along the way until I reached the Financial District and the remains of the World Trade Centre.

Wall Street is nearby, the financial headquarters, leading to the famous and well known Seaport Historic District and Brooklyn Bridge with layered motorways, and the East Village, not the most picturesque part of town.

My third and final day in New York City was spending the morning at the Empire State Building, the highest observation of the city, I was impressed with the views, though for $18(2007) for a ride see it was certainly not worth the experience, instead invest in a helicopter ride for something truly different.

Though the most fun thing about New York City must be the shopping at Macy’s and other high street brands, where the £GBP certainly delivered on a return.

My first visit, but not my last, New York City impressed me more than imagined and went beyond what my expectations were initially. On my next visit I hope to indulge more on the fun it has to offer, and the people who live there.