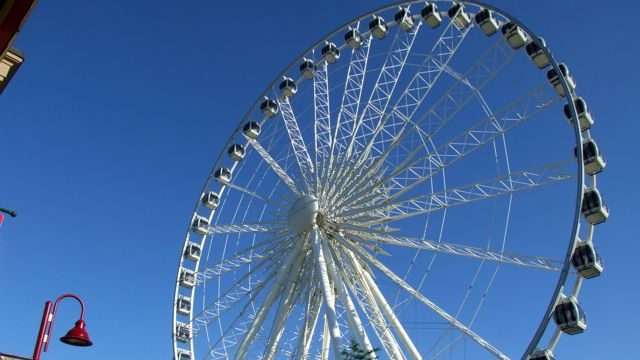 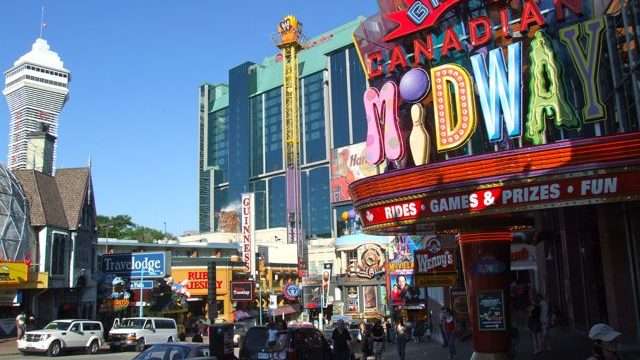 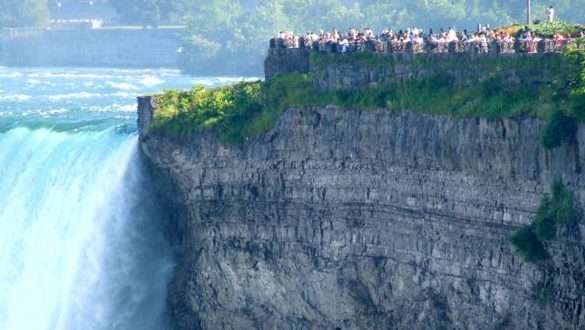 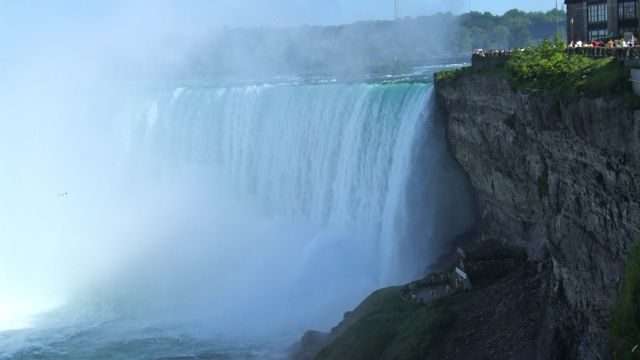 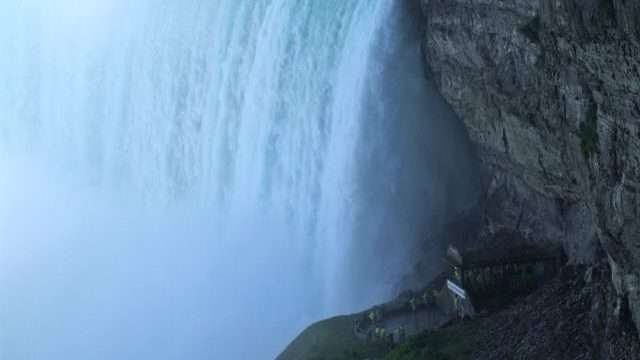 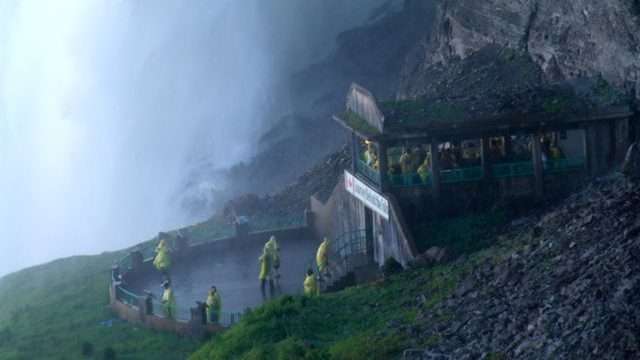 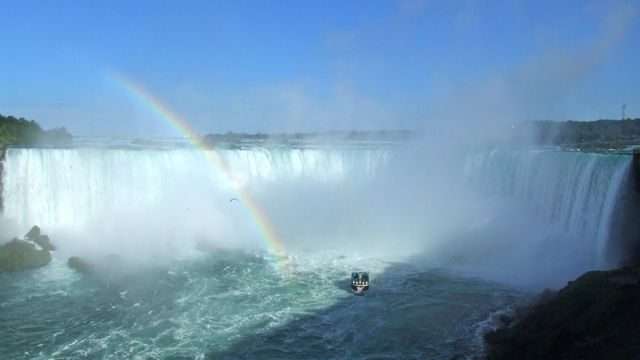 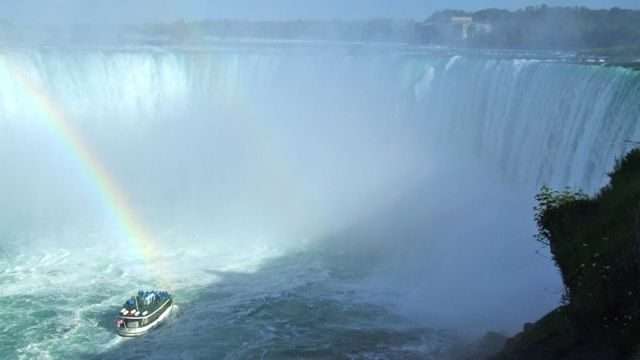 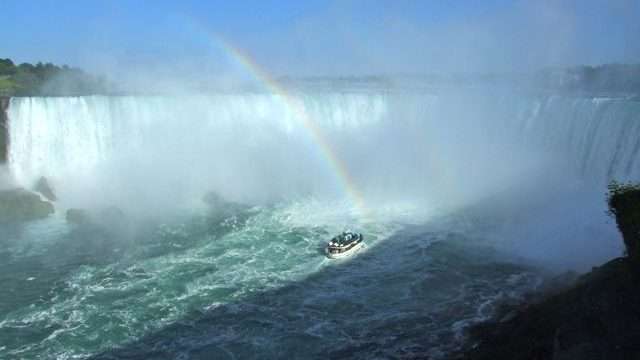 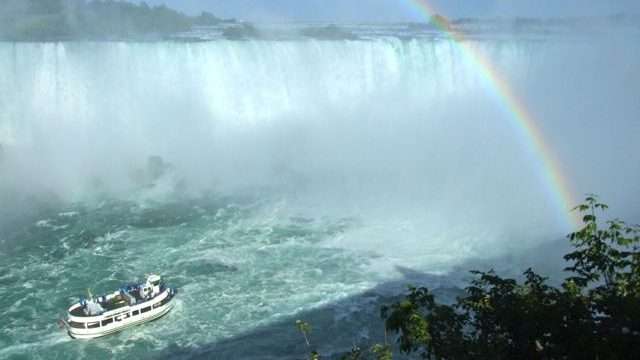 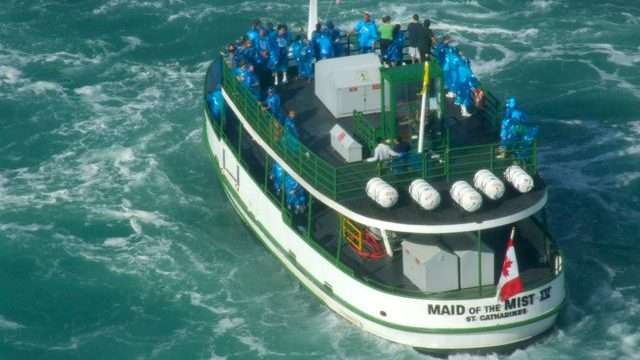 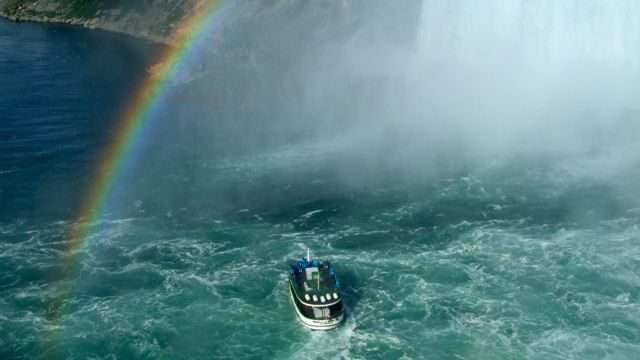 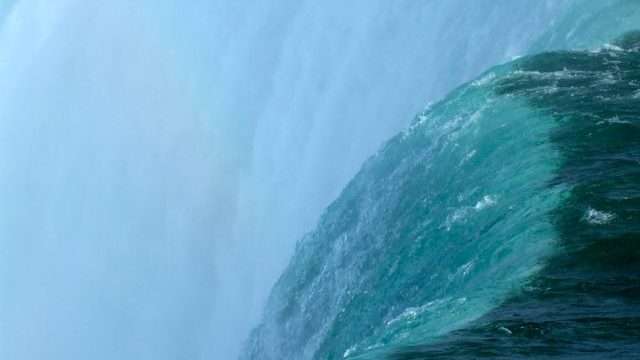 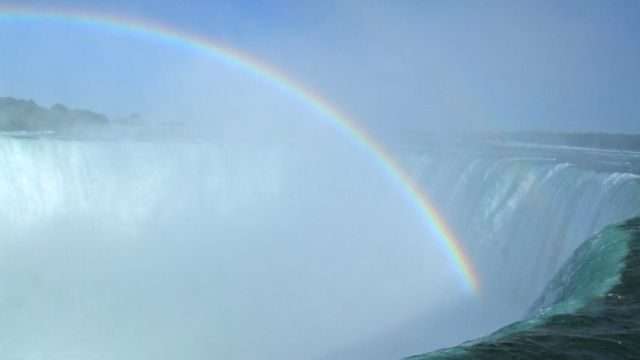 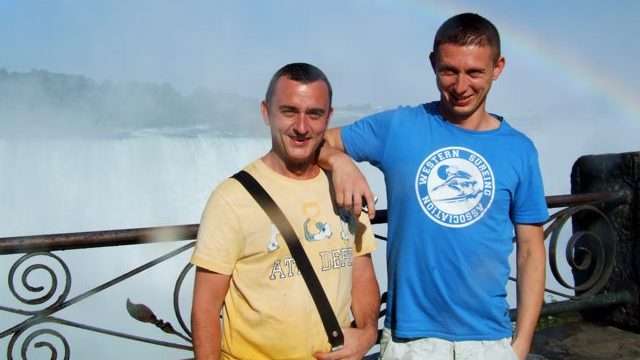 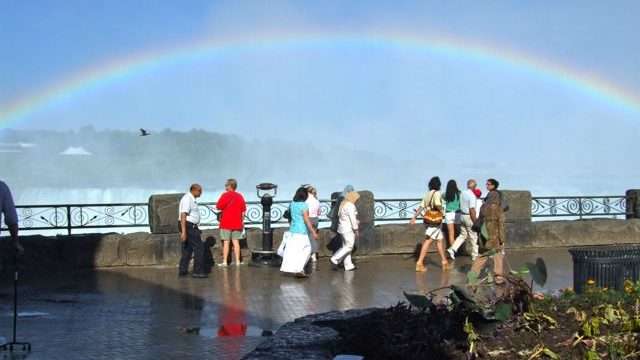 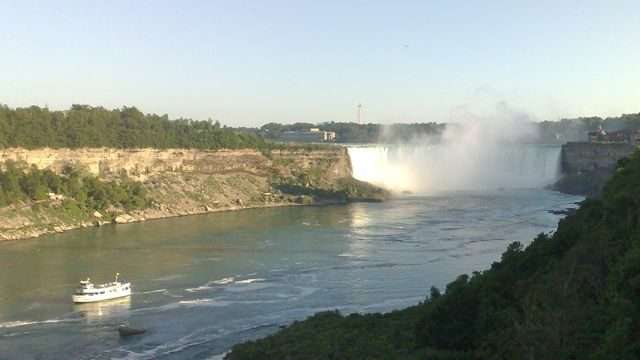 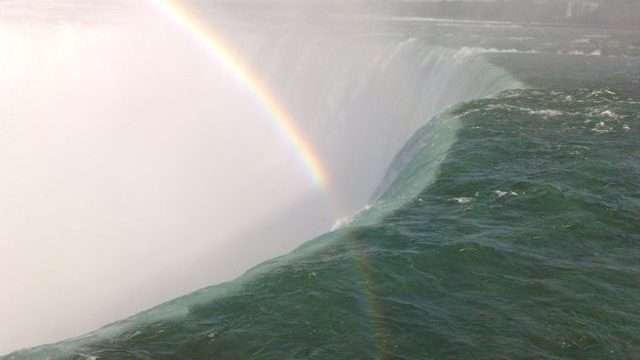 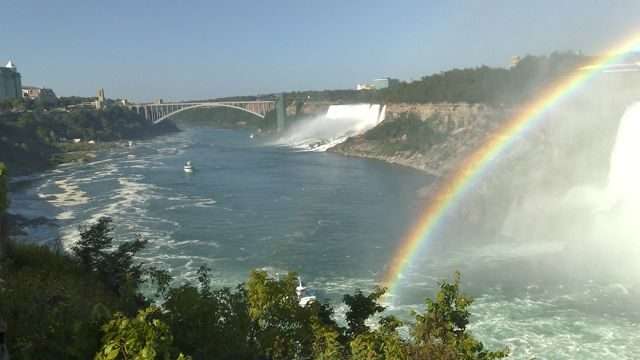 The most powerful waterfall in North America, on the Niagara River between the international borders of Canada and the U.S., composed of two sections: Horseshoe Falls, which lies on the Canadian side of the border, and American Falls on the American side.

Formed when glaciers receded at the end of the last ice age, and water from the newly-formed Great Lakes carved a path through the Niagara Escarpment en route to the Atlantic Ocean. While not exceptionally high, the Niagara Falls are very wide. The Horseshoe Falls drop about 173 feet (53 m), the height of the American Falls varies between 70-100 feet (21 m) because of the presence of giant boulders at its base. The larger Horseshoe Falls are about 2,600 feet (792 m) wide, while the American Falls are 1,060 feet (323 m) wide.

The enormous energy of Niagara Falls has long been recognized as a potential source of power. In 1853, the Niagara Falls Hydraulic Power and Mining Company was chartered, which eventually constructed the canals which would be used to generate electricity. In 1881, enough power was produced to send direct current to illuminate both the Falls themselves and nearby Niagara Falls village.

Currently between 50% and 75% of the Niagara River’s flow is diverted via four huge tunnels that arise far upstream from the waterfalls. The water then passes through hydroelectric turbines that supply power to nearby areas of Canada and the USA before returning to the river well past the Falls.

In October 1829, Sam Patch, who called himself “the Yankee Leapster”, jumped from a high tower into the gorge below the falls and survived; this began a long tradition of daredevils trying to go over the Falls. On October 24, 1901, 63-year-old Michigan school teacher Annie Edson Taylor was the first person to go over the Falls in a barrel as a publicity stunt; she survived, bleeding, but virtually unharmed. Soon after exiting the barrel, she said, “No one should ever try that again.” Since Taylor’s historic ride, 14 other people have intentionally gone over the Falls in or on a device. Some have survived unharmed, but others have drowned or been severely injured. Survivors of such stunts face charges and stiff fines, as it is illegal, on both sides of the border, to attempt to go over the Falls.

Other daredevils have made crossing the Falls their goal, starting with the successful passage by Jean Franiois “Blondin” Gravelet in 1859. These tightrope walkers drew huge crowds to witness their exploits. Their wires ran across the gorge, near the current Rainbow Bridge, not over the waterfall itself. Among the many was Ontario’sWilliam Hunt, who billed himself as “Signor Fanini” and competed with Blondin in performing outrageous stunts over the gorge.

In what some called the “Miracle at Niagara”, Roger Woodward, a seven-year-old American boy, was swept over the Horseshoe Falls protected only by a life vest on July 9, 1960, as two tourists pulled his 17-year-old sister Deanne from the river only 20 feet (6 m) from the lip of the Horseshoe Falls at Goat Island. Minutes later, Roger was plucked from the roiling plunge pool beneath the Horseshoe Falls after grabbing a life ring thrown to him by the crew of the Maid of the Mist boat. His survival, which no one thought possible, made news throughout the world. Dare-devils continue to challenge the power of the falls.

Recent development has been almost completely centred on the Clifton Hill and Fallsview areas. The Niagara Falls downtown is undergoing a major revitalization process developed into an arts and culture district.

The Niagara Peninsula is also a significant wine-growing area, with winery tours and festivals becoming a significant area of growth in the local economy. In the end, the Canadian side of Niagara Falls has more attractions, though you can visit this in a day, I recommend staying at least a night to enjoy all it has to offer.