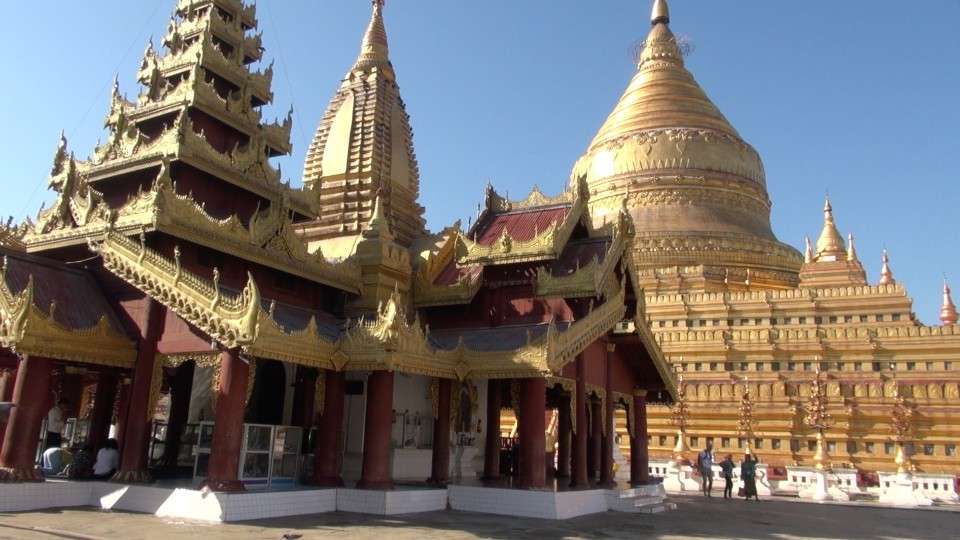 Nyaung-U is a town in the Mandalay Region of central Myanmar. It lies on the eastern bank of Ayeyarwaddy River. It is just 4 kilometres away from old Bagan, a popular tourist attraction.

Nyaung U is a good place to settle for exploring the ancient temples of Bagan. It has modern hotels and a nice selection of eating establishments, many of which offer free wifi. The town isn’t particularly large, and getting around on foot or a rented bike is very easy.

The Shwezigon Pagoda or Shwezigon Paya is a Buddhist temple located in Nyaung U. It is a prototype of Burmese stupas, a mound-like or hemispherical structure containing Buddhist relics, typically the ashes of Buddhist monks, used by Buddhists as a place of meditation. It consists of a circular gold leaf-gilded stupa surrounded by smaller temples and shrines.

Construction of the Shwezigon Pagoda began during the reign of King Anawrahta and was completed in 1102 AD, during the reign of King Kyansittha of the Pagan Dynasty. The pagoda is believed to enshrine a bone and tooth of Gautama Buddha, whose teachings of Buddhism was founded. Within the compound of the Shwezigon Pagoda is a stone pillar containing Mon language inscriptions dedicated by King Kyansittha.

The riverbank is undeveloped but a nice place to visit. It remains untouched and free to anyone who manages to reach it. I used a pedal bike to get around the first day, along some busy roads, and down some side streets and alleys where locals live, to reach the river.

Nyaung U proximity to Bagan and the temples was very convenient for exploring the area. After my pedal bike experience, which only cost about  2$US a day, I upgraded for the electric motorbike for 5$US a day.

The question before arriving was, where to stay in Bagan? Nyaung U was ideal, it is close to the airport and within reach of the most important sites of Bagan, with many conveniences for the modern and adventurous traveller.