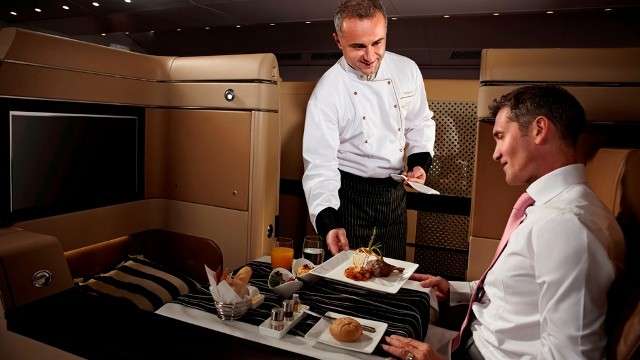 First Class in-flight meals on Etihad—the Abu Dhabi-based airline—are now being prepared by a qualified chef. One person is dedicated to cooking, preparing and plating the meals served in the front of the plane.

Etihad announced the hiring of 110 restaurant-caliber chefs to fly back and forth from Abu Dhabi to a handful of cities while preparing the menu for the Diamond Class cabin. The chefs will also be responsible for contributing to the evolution of the menu and meal choices both in-flight and on the ground in the each of the airline’s lounges. Each chef will need at least 6 years experience in a 5-star restaurant to be welcomed aboard, and there are even some Michelin-starred restaurants that have lost their chef to the airline.

Each aircraft is catered with the fixings to create dishes, just as a chef would do on the ground. Fresh meats, pre-chopped vegetables, spices, sauces and pre-cooked items are available to personalize the menu for passengers. Etihad has even provided the kitchen tools, like whisks and foamers, to jazz up each plate for max “ooo ahhh” reaction.

The complete overhaul of their first class menu, now named “Mazoon Grille,” gives premium passengers plenty of options, based on 5 portions of chicken, beef, lamb or seafood. Variety comes in the form of 4 sauces and another 4 sides, allowing passengers to customize their dining experience. The new menu, a Taste of Arabia, has 6 smaller portions, all with distinct Arab flavors.

All of these changes are coming in early 2012 and will begin with flights to London, Paris, Sydney and Melbourne, eventually expanding to the rest of the flights that have Diamond Class service.