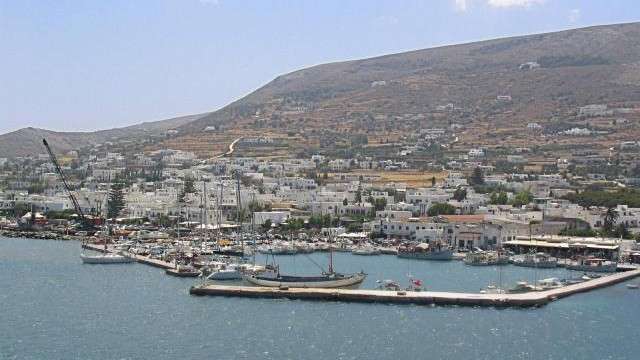 It lies to the west of Naxos, with which it is separated by a channel about 8 km wide. Paros has a butterfly sanctuary, in which thousands fly and breed here, but it only happens once a year.

The second-largest island of the Cyclades belonging to Greece in the central Aegean Sea, it lies to the west of Naxos, around, plump-pear shape, formed by a single mountain sloping evenly down on all sides to a maritime plain. Its nearest neighbour is the Community of Antiparos, lying to its southwest.

Known for its fine white marble which gave rise to the term Parian which is used for China and fine marbles worldwide. It has many beaches and villages such as Parikia, the main town, Naoussa, Lefkes, and Marpissa. Naoussa is an old fishing village turned into a top holiday destination, the village is characterized by its Venetian port and its many fish restaurants.

In 1537, Paros was conquered by the Ottoman Turks and remained under the Ottoman Empire until the Greek War of Independence of 1821-1829. Under the Treaty of Constantinople in 1832, Paros became part of the newly independent Kingdom of Greece, the first time the Parians were ruled by fellow Greeks for over six centuries. At this time, Paros became the home of a heroine of the nationalist movement, Manto Mavrogenous, who had both financed and fought in the war for independence. Her house, near Ekatontapiliani church, is today a historical monument.

The capital, Parikia, situated on a bay on the north-west side of the island, occupies the site of the ancient capital Paros. Houses are built and decorated in the traditional Cycladic style with flat roofs, whitewash walls and blue-painted doors and window frames and shutters. On a rock beside the sea are the remains of a medieval castle, built almost entirely of the marble remains of an ancient temple. Close to the modern harbour, the remains of an ancient cemetery are visible, since being discovered recently during non-archaeological excavations.

In Parikia‘s main square is the town’s principal church, the Panagia Ekatontapiliani, which means the church of 100 doors. Said to have been founded by the mother of the Roman Emperor Constantine the Great, Saint Helen, during her pilgrimage to the Holy Land.

Parian marble, which is white and translucent with a coarse grain and a very beautiful texture, used to make countless artistic masterpieces including the famous Venus de Milo, was the chief source of wealth for the island. The celebrated marble quarries lie on the northern side of the mountain.