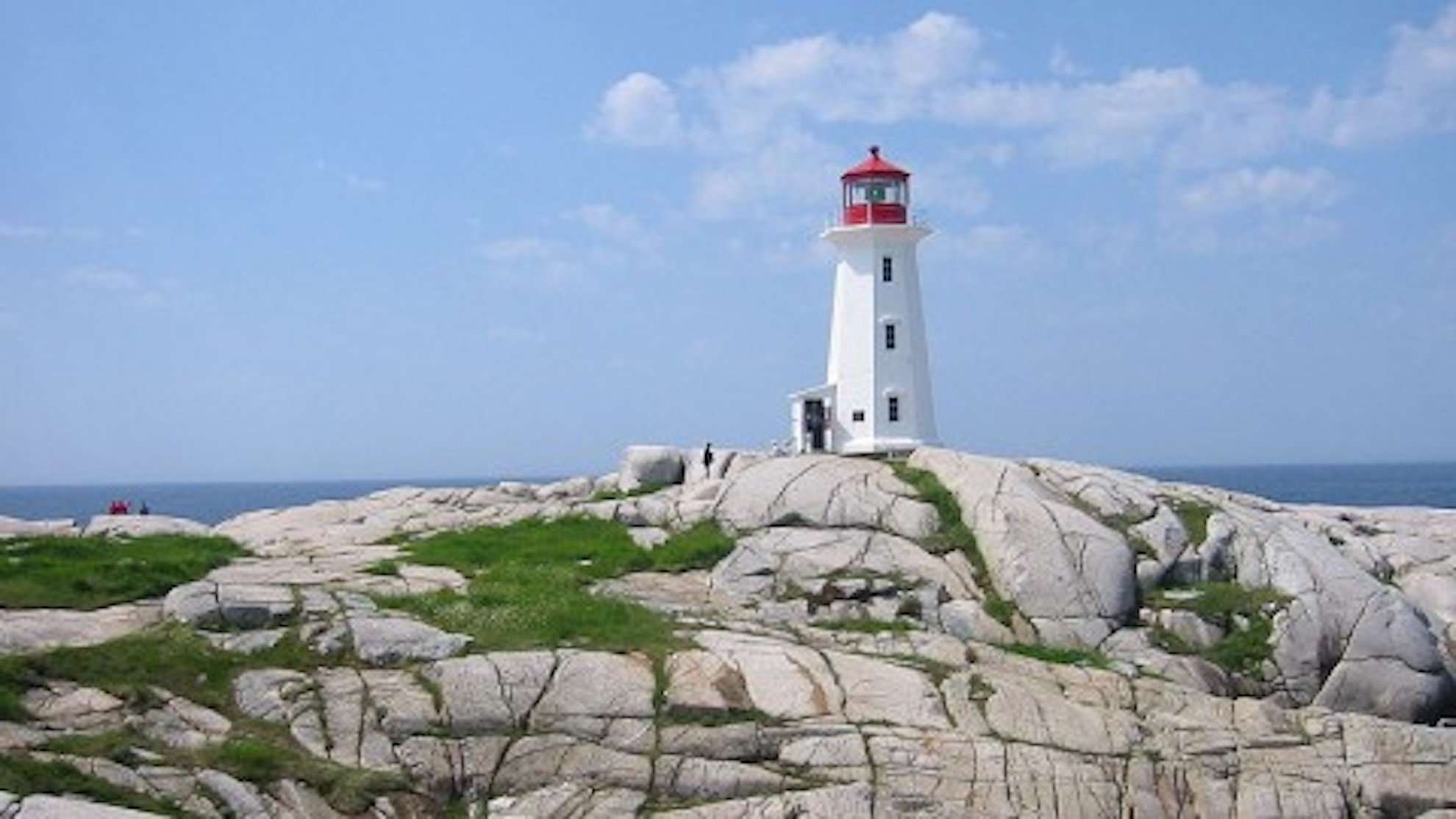 Peggys Cove is a small rural community located on the eastern shore of St. Margarets Bay, 43 kilometres southwest of downtown Halifax and comprises one of the numerous small fishing communities. The community is named after the cove of the same name, a name also shared with Peggys Point, immediately to the east of the cove.

Peggys Cove is one of the busiest tourist attractions in Nova Scotia and is a prime attraction on the Lighthouse Trail scenic drive. The community’s famous lighthouse marks the eastern entrance of St. Margarets Bay and is officially known as the Peggys Point Lighthouse, a classic red-and-white lighthouse still operated by the Canadian Coast Guard. The light station is situated on an extensive granite outcrop at Peggys Point, immediately south of the village and its cove. This lighthouse is one of the most-photographed structures in Atlantic Canada and one of the most recognizable lighthouses in the world.

Visitors may explore the granite outcrop on Peggys Point around the lighthouse, despite numerous signs warning of unpredictable surf, including one on a bronze plaque on the lighthouse itself, several incautious visitors each year are swept off the rocks by waves, sometimes drowning.

I visited Peggys Point in 1997, after seeing pictures I wanted to see the Atlantic coast, I had been exploring much of western Canada already. Getting there was not the easiest of methods unless of course, you rent a car. On this occasion I found myself using my thumb to get me there, the first time (and only) I ever hitched a ride.

On the outskirts of Halifax, I raised my hand with my thumb upwards looking in the direction of the on-coming traffic. At least the weather was fine, no rain, and I waited all but fifteen minutes before I got a ride in a pick-up which took me further along my route but not to my final destination Peggys Cove. I was dropped off at a fork in the road with only a small shop and woodland around, there was even less traffic going in my direction than I had hoped. I waited about half an hour with only about a dozen cars pass me.

Across the road someone was watching from the steps of the shop, I saw them approach and asked where I was going with my backpack at my side. A local teenager skipping the day from school wondered why I had ventured so far just to see Peggys Cove, he wasn’t convinced I would get there on my own and disappeared.

Within ten minutes a car pulled up in front of me, it was this teenager who had questioned me earlier and said it was the only way I was going to make it to Peggys Cove. I got in and we went on our way, he was more curious about why I wanted to see this place as he consistently said there was nothing there to see. Roughly forty minutes later we had reached the bay and the town, it was misty and slightly grey and foggy. He was right, there was nothing there but a few shacks and boats, and on the edge sitting on the rocks was the well-photographed lighthouse with the sea beyond. My intent was to stay the night but soon discovered there was no-where to stay except for the one and only B&B, also realising that getting out would be difficult since it was not serviced by public transport.

We stayed for about half an hour as I wandered the area, it was tranquil and quiet, and colourful with painted boats and buildings. The ocean waves and a horizon made a spectacular site, it was like having just discovered land after a long voyage.

I was driven around by my sudden roadside and local companion who drove to see other sites along the coast, dirt roads and all. It was mostly baron, rugged and rocky. For a teenager, life here was ‘just boring’ and ‘un-stimulating’. I was treated to tea at his home before I was driven back to a local bus stop that would get me back to Halifax late that afternoon, but I was impressed by the hospitality and friendliness, and the effort made to get me where I wanted.

Overall, Peggys Cove can be seen and done in a day and requires no overnight stay, unless you really want to live by the sea in such an isolated place like this.