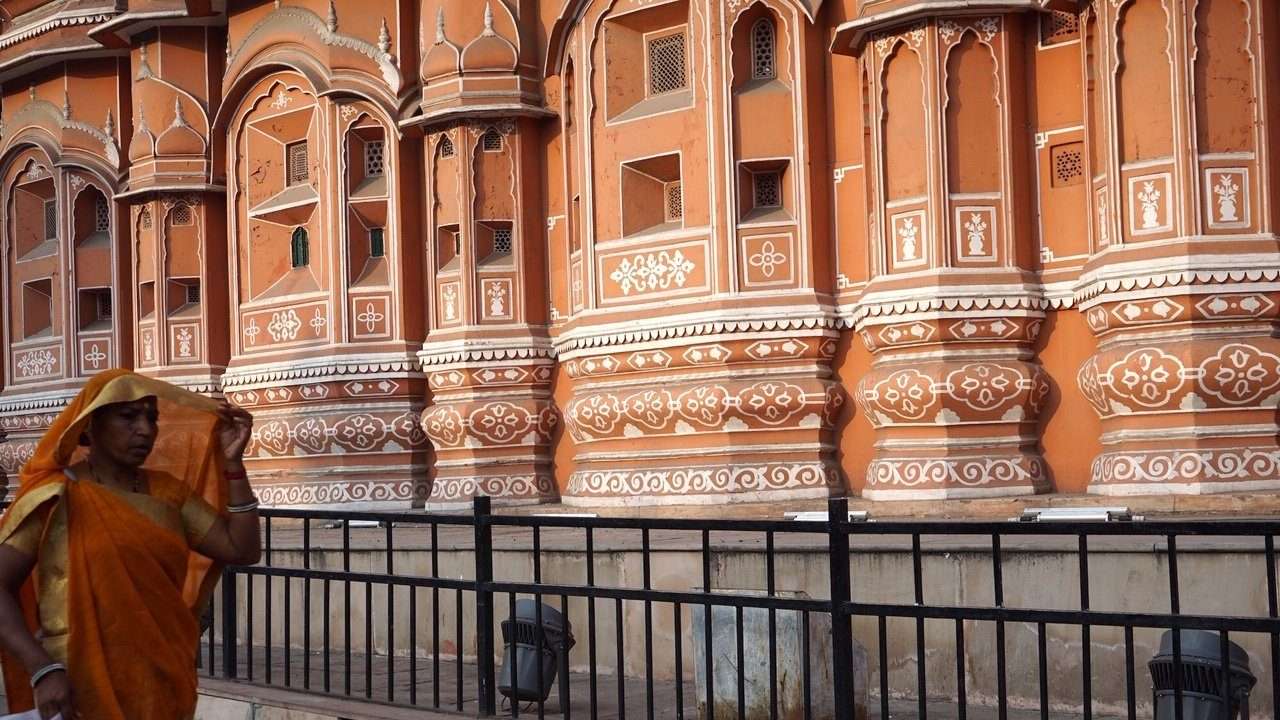 Jaipur is often called the Pink City in reference to its distinctly colored buildings, which were originally painted this colour to imitate the red sandstone architecture of Maugham cities. The present earthy red color originates from repainting of the buildings undertaken for a visit by the Prince of Wales in 1876.

Jaipur is the largest city in Rajasthan and was built in the eighteenth century by Sawai Jai Singh as India‘s first planned city. It belongs to the tourist Golden Triangle of Delhi, Jaipur, and Agra. It hosts several attractions like the City Palace, Govind Dev ji Temple, Vidhan Sabha, Birla Temple, several massive Rajput forts and so on.

From the City Palace, you enter the extraordinary “Jantar Mantar”, the astronomical observatory built by Raja Sawai Jai Singh II in 1827. Roughly translated the name means “The Formula of Instruments”. This is one of five observatories he built in northern India.

Amber Fort, the former capital of royal Jaipur. Few fail to be moved by the dramatic Rajput grandeur of this hilltop fortress-palace 11 km north of Jaipur. Set on the dry wrinkled Aravalli Hills and surrounded by fortified battlements, the palace straddles two sepia-hued tundra hills overlooking Maota Lake and its sprawling crenelated walls lattice the surrounding hills. History of this architectural masterpiece with its mirror-studded alcoves, dazzling mosaics and water-cooled swings that delight today’s visitors as they did their former royal residents.

Jaipur gets its name from its founder Maharaja JaiSingh II (1693-1744) the great warrior and astronomer. He came to power at the age of 11 on the death of his father.

Ruling from the magnificent Amber Fort which they built, the might of the Kucchwahas encompassed the kingdoms of Mewar (Udaipur) and Marwar (Jodhpur). After Jai Singh came to power, there was a moment of disquiet when he supported Aurangzeb’s son Azam Shah’s bid to the throne. Azam Shah lost the battle of succession to his brother Bahadur Shah, who demanded Jai Singh’s removal and the installation of Vijay Singh to the throne of Jaipur. Jai Singh, not one to take setbacks lying down, formed a formidable front against the Mughals by aligning himself with other Rajput states and reinstated himself.

After the dust had settled, peace reigned and the kingdom prospered and its borders expanded. Jai Singh built the city around the Amber fort to serve as his capital, and the city was named Jaipur, after himself.

After Jai Singh’s death in 1744, his sons squabbled for power and without a monarch, the kingdom became open to invasion and neighboring Rajput states and the Marathas usurped large areas of the kingdom. The core, however, remained part of the kingdom, which lasted during British times.

As with the Mughals, Jaipur maintained good relations with the British and during the war of independence in 1857 remained loyal to the Raj. Yet, the British gradually began to undermine the independence of the state and exercised greater control over the administration.

In 1876, Maharaja Ram Singh painted the entire city pink, traditionally a colour associated with hospitality, to welcome the Prince of Wales (later King Edward VII) to the city. The tradition has been maintained and today all residents in the old city are compelled by law to preserve the pink colour. Jaipur got the nickname of the pink city.

Maharaja Ram Singh also built the Ramgarh Lake to supply water to the burgeoning city. During the 19th and 20th centuries, the city’s population spread beyond its walls. In 1922, Man Singh II ascended to the throne and it was during his reign that civic buildings like the secretariat, schools, hospitals and other public buildings were built.