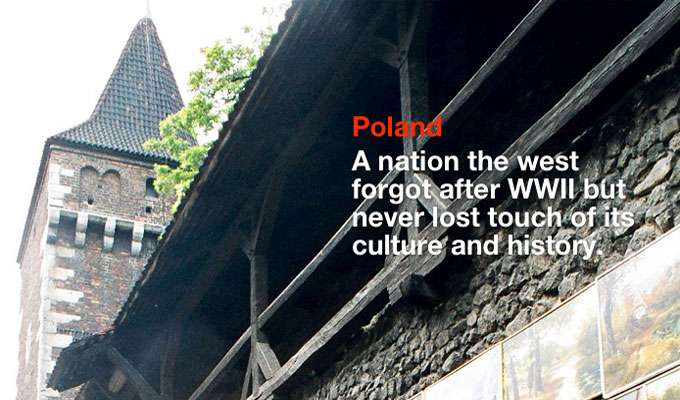 Formed more than 1,000 years ago, its golden age was near the end of the 16th century when Poland was one of the largest, wealthiest, and most powerful countries in Europe.

Thoughts of war, destruction and the atrocities at Auschwitz are the first images that come to mind about Poland but as I found there is so much more to be discovered with legends, history, scenery, culture, entertainment, and the people. A member of the European Union since May 1st 2004, tourism has blossomed and is on a path of rebuilding and revealing its true treasures. A proud and cultured population, Poles have maintained a distinct sense of culture and community.

Nowadays, Poland is a democratic country with a stable, robust economy. Poland has also successfully joined the borderless Europe agreement, with an open frontier to Germany, Czech Republic and Slovakia. Poland’s dream of returning to Europe as a respected independent nation has finally been achieved.

The Polish language, part of the West Slavic branch of the Slavic languages, functions as the official language of Poland. Polish food has both influenced and been influenced by the cuisines of surrounding countries, rich in meat, especially chicken and pork, and winter vegetables, bigos (meats and vegetables, on a base of pickled cabbage), kielbasa, barszcz, pierogi, flaczki (tripe soup), golabki (cabbage rolls), pork chops, various potato dishes, a fast-food sandwich (zapiekanka) and many more.

Poland is known as the birthplace of vodka, a drink enjoyed by most Poles on almost any occasion.

Poland is a part of the global tourism market with constantly increasing number of visitors, the 17th most visited country by foreign tourists (2008). The most popular cities are Warsaw, Krakow, Wroclaw, Poznan, Lublin, Torun, including the historic site of the Auschwitz concentration camp near Oswiecim. Popular destinations include northeast Poland’s Mazury lake district and Bialowieza Forest.