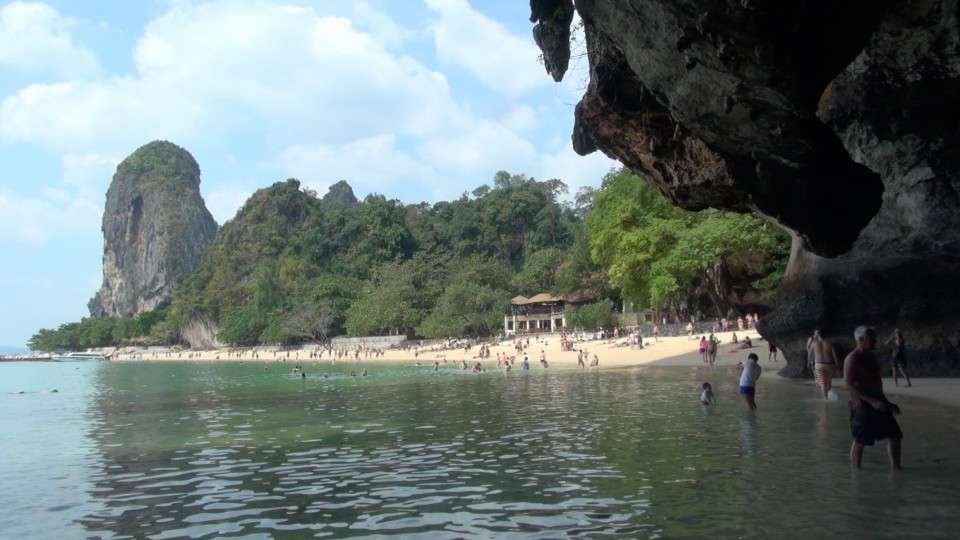 Rai Leh, also commonly known as Railay, is a tourist area located on the Andaman Coast of Thailand, in Krabi Province. Rai Leh is primarily known as a rock climbing hot spot, attracting climbers from all over the world to its superb towering limestone.

As Rai Leh is a peninsula surrounded by ocean and mountains, final access can only be by boat. Long-tails depart from Ao Nang (10 minutes, 100 baht/person, minimum 8 people) and Krabi (30 minutes) on-demand, making those towns the gateways.

Rai Leh is considered to be all of the peninsulae, which has four primary areas:

Phra Nang: (shown as Pranang Cave Beach in local maps) a white sand beach, on the southern tip of the peninsula. Can get crowded and busy. This just average beach is 20 minutes away from Ao Nang by long-tail boat. It has nice scenery and is a good swimming beach when the tide is high. However, during the low tide, it looks dreadful and the only thing to do here is to listen to the never-stopping boat noise while watching the climbers right off the beach.

Rai Leh East: the mangrove side of the peninsula, used by long-tails to/from Krabi. Not good for swimming or sunbathing. Some of restaurants and bars. Mid-range to budget accommodations.

Rai Leh West: a fine beach of white sand and shallow water, where most long-tails arrive from Ao Nang. North end of the beach is great for swimming but most of other beaches in the area, completely unusable during the low tide. Be careful, it is rocky under the water. To the right, the bay stretches away past Ton Sai to the massive Sleeping Indian cliffs, so named because that is exactly what they resemble at night. The kilometre-long Sleeping Indian is lying on his back, with his hands folded across his midriff, his feet sticking up and a feather sticking out of his headdress. It’s an uncanny resemblance, especially at night-time.

Ton Sai: a cove around the corner from Rai Leh West where rock climbers and backpackers hang out in cheap accommodations and practice climbing.

It’s a 5-10 minute walk between any of these landmarks, except for Ton Sai, which is a longer hike through the jungle. The village itself is a pedestrian’s dream, as there are no cars, and the uneven bumpy walkways make even bicycles impractical.

Phra Nang Cave, also known as Diamond Cave, on the east side of the peninsula, to the north of Rai Leh East, is an interesting place to explore and one of the few strictly sight-seeing destinations at Rai Leh. A nominal entrance fee pays for a short walk along the lit boardwalk through formations that glitter as if they were full of diamonds. Though not breathtakingly large (and thus easily viewed in about fifteen minutes) it is quite beautiful. The cave is a common stop for day trips from Phuket and Ao Nang.

Phra Nang Shrine, north end of Phra Nang Beach. Dedicated to the spirit of the drowned princess (Phra Nang) who gave the beach her name, this small shrine in a small cave is notable primarily for the dozens of carved red-tipped phalluses donated by fishermen seeking her favour.

Lagoon & Viewpoint, walking on the path from East Rai Leh to Phra Nang Beach there is a sign that points towards an upward path to a viewpoint of Rai Leh and Ton Sai. The climb to the top takes about 20-25 minutes and to the viewpoint another 10 minutes. From the top of the trail, there is another path that leads down towards the jungle for about 20-25 minutes to the lagoon. The path to the lagoon is steep, rocky, and dangerous. Some have carried climbing gear to reach the lagoon. There are hand ropes along with the steeper parts of the path, but note that if you are not in decent shape, wearing only sandals, or carrying a heavy pack, the trip is not advisable.

Monkeys may be encountered in the forest here. They can be approached cautiously, but feeding or petting them is not a good idea. Watch your belongings, as they can quickly snatch glasses, wallets, or food from you.