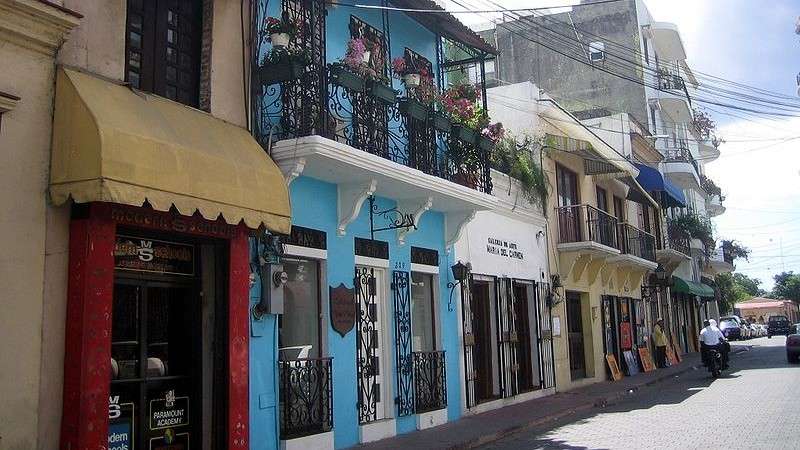 Santo Domingo is the capital and largest city in the Dominican Republic. Founded by Bartholomew Columbus in 1496, it is the oldest continuously inhabited European settlement in the Americas and was the first seat of Spanish colonial rule in the New World. Santo Domingo came to be known as the “Gateway to the Caribbean”.

Before the arrival of Christopher Columbus in 1492, the Taíno people populated the island, which Columbus named Hispaniola. It includes the part now occupied by the Republic of Haiti. Dating to 1496, when the Spanish settled there, Santo Domingo is the oldest European city in America.

Bartholomew Columbus founded the settlement and named it La Isabela, after the Queen of Spain Isabella I, later renamed “Santo Domingo”, in honour of Saint Dominic. Christopher was buried in Santo Domingo upon his death in 1506.

The original layout of the city and a large portion of its defensive wall can still be appreciated today throughout the Colonial Zone, declared a World Heritage Site by UNESCO in 1990, has a collection of 16th-century buildings, including palatial houses and majestic churches that reflect the architectural style of the late medieval period.

The city’s most important colonial buildings include the Catedral Santa María La Menor, America’s first cathedral, the Alcázar de Colón, America’s first castle, once the residence of the son of Christopher Columbus, the Monasterio de San Francisco, the ruins of the first monastery in America, the Museo de las Casas Reales, the former Palace of the Governor-General and the Palace of Royal Audiences, the Parque Colón (Columbus Park), a historic square, the Fortaleza Ozama, the oldest fortress in America, and the Iglesia del Convento Dominico, the first convent in America.

Throughout its first century, Santo Domingo was the launching pad for much of the exploration and conquest of the New World and the expeditions that led to the conquest of Mexico. In 1586, Francis Drake captured the city, which he held for ransom. Drake’s invasion and pillaging of Hispaniola so weakened Spanish dominion over the island that for more than 50 years all but the capital was abandoned and left to the mercy of the pirates.

An expedition sent by Oliver Cromwell in 1655 attacked the city of Santo Domingo, but was defeated, and withdrew and took Jamaica, instead. From 1795 to 1822 the city changed hands several times along with the colony it headed. It was ceded to France in 1795, captured by rebellious Haitian slaves in 1801, recovered by France in 1802, recovered by Spain in 1809, and in 1821 conquered by Haiti. The city and the colony lost much of their Spanish population as a result of these events.

Santo Domingo was again the capital of a free nation, when Dominicans gained their independence from Haitian rule on February 27, 1844. In 1861 Spain returned to the country, having struck a bargain where annexing the nation back to Spanish rule. The Dominican Restoration War began in 1863 however, and in 1865 the country was free again after Spain withdrew. Over the next two-thirds of a century, Santo Domingo and the Dominican Republic went through many revolutions, power changes, and occupation by the United States, 1916-24. It was the scene of street fighting during the 1965 United States occupation of the Dominican Republic.

The year 1992 marked the 500th anniversary of Christopher Columbus’ Discovery of America. The Columbus Lighthouse , Faro a Colón, was erected in Santo Domingo in honor of this occasion.

Santo Domingo is the center of the national government of the Dominican Republic. The National Palace, which is the President’s office, as well as the National Congress. Power outages continue to be a problem in certain parts of the city. Santo Domingo contains a wide variety of incomes, ranging from the extremely poor to the highly rich.

Most of the city’s poor live outside the center. Some live in extreme conditions of poverty and in slums, intensifying the city’s economic contrast. The city is included on the Blacksmith Institute’s list of the world’s 10 most polluted places (2006), due to lead poisoning by a battery recycling smelter closed in 1999, as the site never was cleaned up children continue to be born with high lead levels causing learning disabilities, impaired physical growth and kidney damage.

Before I continue I have to state that my last visit here was in 1991, I can’t say I was impressed by this capital, I found the city of Santo Domingo to be just shameful for capital, I still list it on the bottom of my list of places to go, though Santo Domingo has since changed immensely according to what I’ve researched, with the fastest growing economies in the Caribbean and improved infrastructures like a new metro underground rail service, but not something I would like to return to confirm.

Though I found the beaches catering to package holiday traveller much better than those in the north. We spent a day exploring the city and spending the next six days on the resort recovering from some bad water or food, it simply was a matter of watching who was running for their room. As my second visit to the Dominican Republic, at that time, I made the decision not to return again.