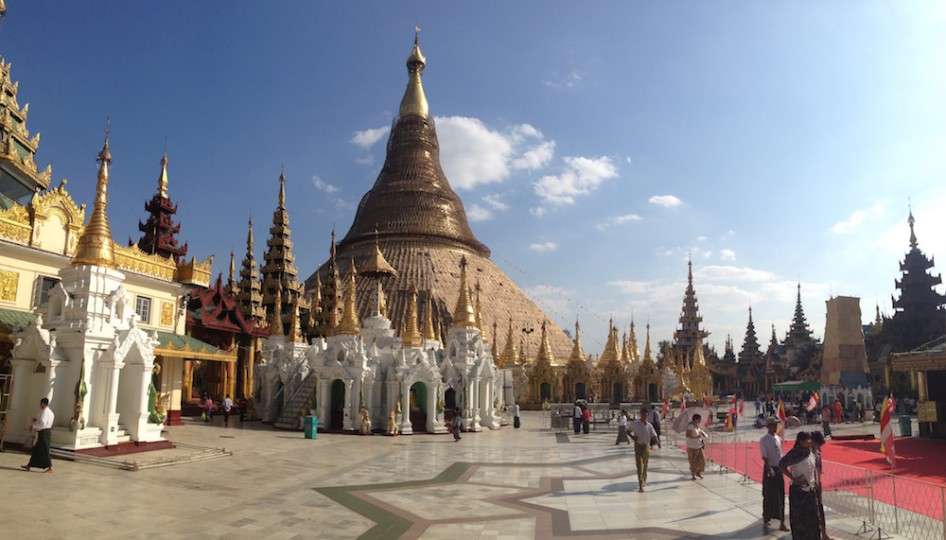 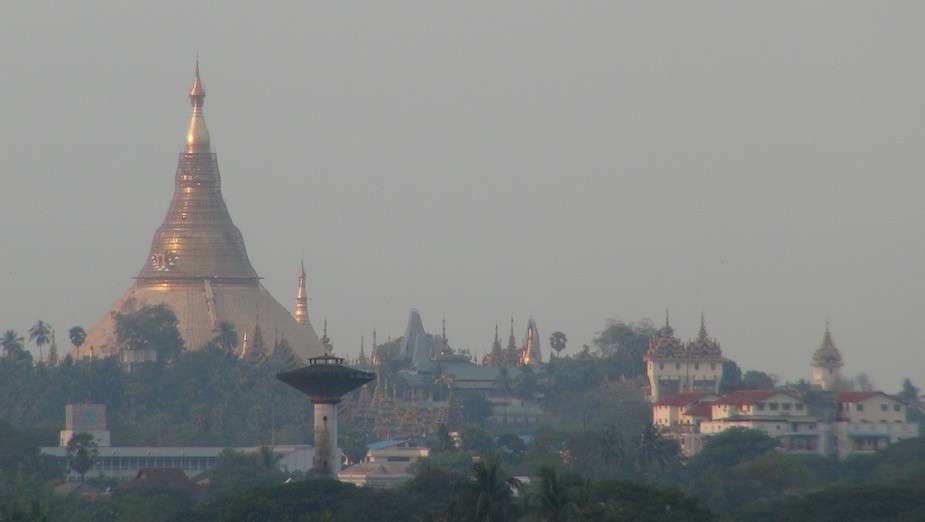 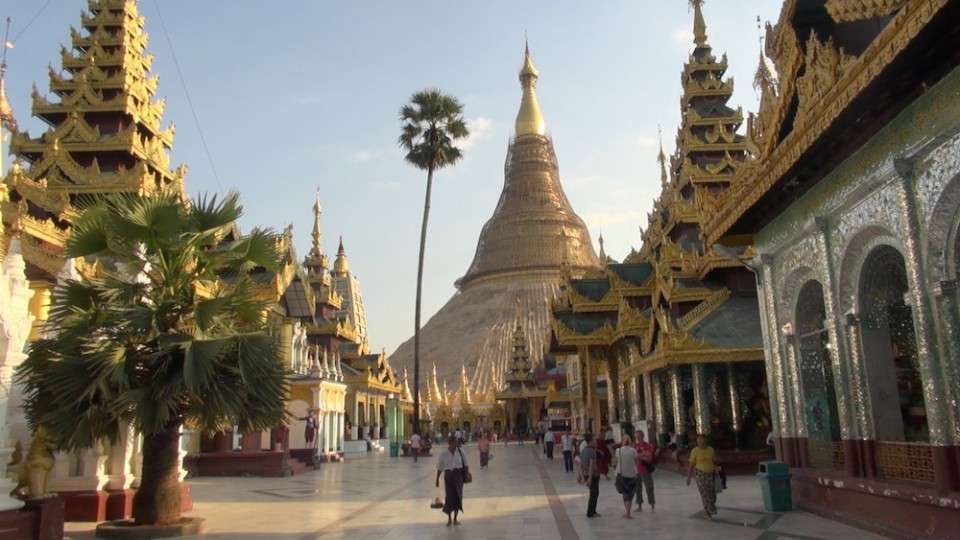 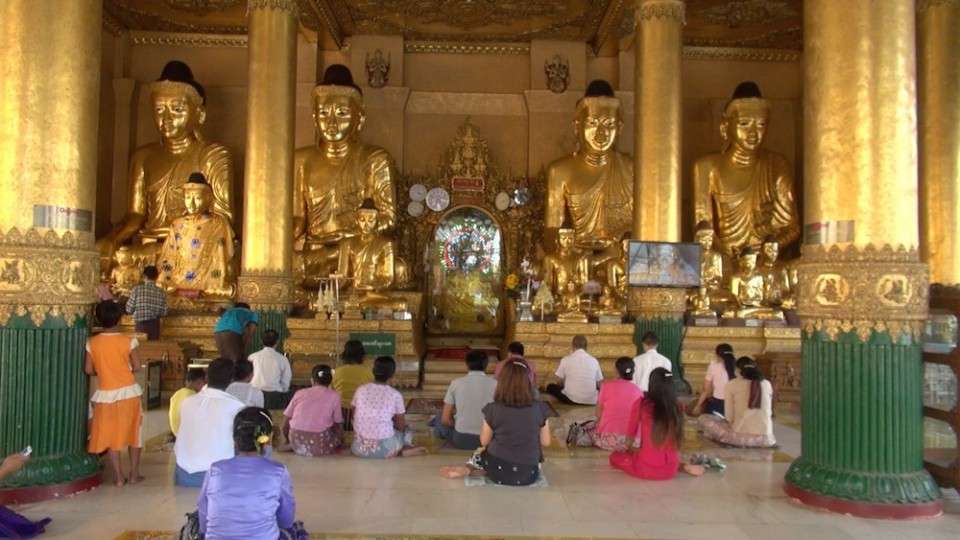 According to legend, the Shwedagon Pagoda was constructed more than 2,600 years ago, making it the oldest Buddhist stupa in the world. Officially named Shwedagon Zedi Daw, the 99 metres (325 ft) tall pagoda is a gilded stupa that dominates the skyline of Yangon, Myanmar.

This sacred site was so impressive I easily spend a few hours here, walking around the pagoda and visiting the many temples witch surround the main golden pagoda in the centre. Round and round I went observing the ritual and prayers, and the many deities that one comes here to pray to. A good tip to know is the day of your birth, this way you too may know where you too can say your prayer and make your offerings.

Shwedagon Pagoda is the most sacred Buddhist pagoda in Myanmar, as it is believed to contain relics of the four previous Buddhas of the present Kalpa, the period of time between the creation and recreation of a world or universe. These relics include the staff of Kakusandha, the water filter of Koṇāgamana, a piece of the robe of Kassapa, and eight strands of hair from the head of Gautama.

Historians and archaeologists maintain that the pagoda was built by the Mon people between the 6th and 10th centuries CE. However, according to legend, the Shwedagon Pagoda was constructed more than 2,600 years ago, making it the oldest Buddhist stupa in the world.

According to tradition, Taphussa and Bhallika — two merchant brothers from the city of Balkh in what is currently Afghanistan — met the Lord Gautama Buddha during his lifetime and received eight of the Buddha’s hairs. The brothers travelled to Burma and, with the help of the local ruler, King Okkalapa found Singuttara Hill, where relics of other Buddhas preceding Gautama Buddha had been enshrined.  When the king opened the golden casket in which the brothers had carried the hairs, incredible things happened:

There was a tumult among men and spirits … rays emitted by the Hairs penetrated up to the heavens above and down to hell … the blind beheld objects … the deaf heard sounds … the dumb spoke distinctly … the earth quaked … the winds of the ocean blew … Mount Meru shook … lightning flashed … gems rained down until they were knee-deep … all trees of the Himalayas, though not in season, bore blossoms and fruit.

A series of earthquakes during the following centuries caused damage. The worst damage was caused by a 1768 earthquake that brought down the top of the stupa, but King Hsinbyushin later raised it to its current height of 99 m (325 ft). The Hti, the finial ornament that tops almost all pagodas in Myanmar (meaning umbrella in Burmese), was donated by King Mindon Min in 1871 after the annexation of Lower Burma by the British.

The stupa fell into disrepair until the 14th century, when King Binnya U (1323–1384) rebuilt it to a height of 18 m (59 ft). A century later, Queen Binnya Thau (1453–1472) raised its height to 40 m (131 ft). She terraced the hill on which it stands, paved the top terrace with flagstones, and assigned land and hereditary slaves for its maintenance. During her last illness she had her bed placed so that she could look upon the gilded dome of the stupa.

By the beginning of the 16th century, Shwedagon Pagoda had become the most famous Buddhist pilgrimage site in Burma.

The base of the stupa is made of bricks covered with gold plates. Above the base are terraces that only monks and other males can access. Next is the bell-shaped part of the stupa. Above that is the turban, then the inverted almsbowl, inverted and upright lotus petals, the banana bud and then the umbrella crown, Hti as known in Burmese. The crown is tipped with 5,448 diamonds and 2,317 rubies. Immediately before the diamond bud is a flag-shaped vane. The very top—the diamond bud—is tipped with a 76 carat (15 g) diamond.

The gold seen on the stupa is made of genuine gold plates, covering the brick structure and attached by traditional rivets. People all over the country, as well as monarchs in its history, have donated gold to the pagoda to maintain it. The practise continues to this day after being started in the 15th century by the Queen Binnya Thau, who gave her weight in gold.

There are four entrances, each leading up a flight of steps to the platform on Singuttara Hill. A pair of giant geoglyphs, lion-like creature, guards each entrance. The eastern and southern approaches have vendors selling books, good luck charms, images of the Buddha, candles, gold leaf, incense sticks, prayer flags, streamers, miniature umbrellas and flowers.

Most Burmese people are Theravada Buddhists, and many also follow practices which originated in Hindu astrology. Burmese astrology recognizes the seven planets of astrology — the Sun, Moon, Mercury, Venus, Mars, Jupiter, and Saturn. In addition, it recognizes two other planets, Rahu and Ketu.

All the Burmese names of the planets are borrowed from Hindu astrology, but the Burmese Rahu and Ketu are different from the Hindu Rahu and Ketu. The Burmese consider them to be distinct and separate planets, whereas Hindu astrology considers them to be either the Dragon’s Head and Tails, or Ascending and Descending Nodes. To the Burmese people, Ketu is the king of all planets. As in many other languages, the Burmese name the seven days of their week after the seven planets, but Burmese astrology recognizes an eight-day week, with Wednesday being divided into two days; until 6 p.m. it is Wednesday, but after 6.pm. until midnight it is Rahu’s day.

It is important for Burmese Buddhists to know on which day of the week they were born, as this determines their planetary post. There are eight planetary posts, as Wednesday is split in two (a.m. and p.m.). They are marked by animals that represent the day — garuda (a large bird-like creature) for Sunday, tiger for Monday, a lion for Tuesday, tusked elephant for Wednesday morning, tuskless elephant for Wednesday afternoon, mouse for Thursday, a guinea pig for Friday and nāga (great snake) for Saturday.

Each planetary post has a Buddha image and devotees offer flowers and prayer flags and pour water on the image with a prayer and a wish. At the base of the post behind the image is a guardian angel, and underneath the image is the animal representing that particular day. The base of the stupa is octagonal and also surrounded by eight small shrines (one for each planetary post). It is customary to circumnavigate Buddhist stupas in a clockwise direction.

The pilgrim, on his way up the steps of the pagoda, buys flowers, candles, coloured flags and streamers. These are to be placed at the stupa in a symbolic act of giving, which is an important aspect of Buddhist teaching. There are donation boxes located in various places around the pagoda to receive voluntary offerings which may be given to the pagoda for general purposes.

See my video of Yangon which features the Shewdagon Pagoda →