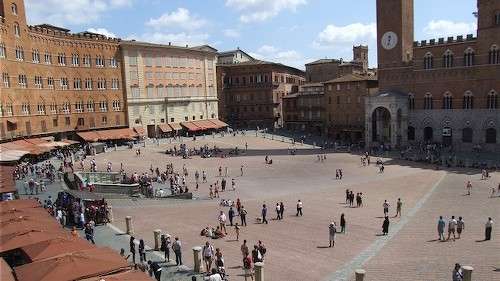 A picturesque city medieval city in the region of Tuscany, Siena is located in the north of Italy south of Florence, declared a World Heritage Site by UNESCO.

Siena was a proud, wealthy, and warlike independent state during the Middle Ages, until its defeat by Florence. It was a poor little city for a few hundred years after its defeat, which is the main reason that its lovely Medieval buildings were never torn down and replaced with modern structures.

In the 19th century, tourists started coming. Nowadays, it is a requirement that new buildings within the city walls be built to maintain the city’s character. Sienese people are fiercely proud of their city and their neighbourhood (contrada).

The shell-shaped Piazza del Campo is famous for hosting the Palio horse race. The town square, houses the Palazzo Pubblico, Siena’s City Hall for almost 800 years, and the Torre del Mangia from whose top you can view a panorama of the Sienese countryside. The centre of Siena is accessible only on foot, cars (other than taxis, police, etc.) are strictly prohibited.

Siena‘s cathedral, the Duomo, is one of the great examples of Italian romanesque architecture. Its main facade was completed in 1380. Inside is the famous Gothic octagonal pulpit and the labyrinth inlaid in the flooring.

The Palio is all about neighbourhood pride and rivalry, and also constitutes the unbroken continuation of a Medieval tradition since the 11th century, associated with religion and pageantry. It is taken very seriously. Run in The Campo of Siena on July 2 and August 16 between the 17 contrade (which are city neighbourhoods) of Siena. Ten of the seventeen runs in each Palio. A horse is assigned to each by a lot. All Sienese are affiliated with one of the contrade, to which a typical Sienese feels loyal with a strength perhaps surpassed only by their loyalty to their family. Though often a brutal and dangerous competition for horse and rider alike, the city thrives on the pride this competition brings.

Though I haven’t been fortunate enough to attend the event, it does sound like something to be experienced. It is free to watch the event from the centre of The Campo, though this means staying in the direct heat of the sun for most of the day, you can pay to watch the event from one of the balconies of the buildings around the square – though I have been informed it can be expensive.

Siena is worth the visit, even if just for the day. This is one of those places that takes you back in time, dream a little, you may imagine yourself in a colourful Medieval costume walking its narrow streets, or maybe I just have too vivid of an imagination.