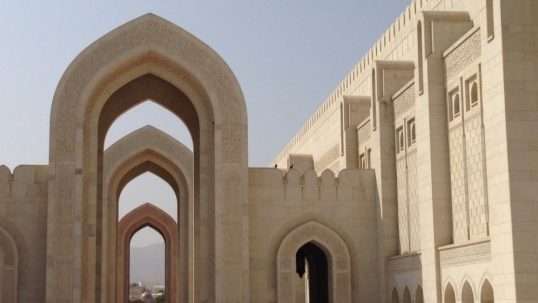 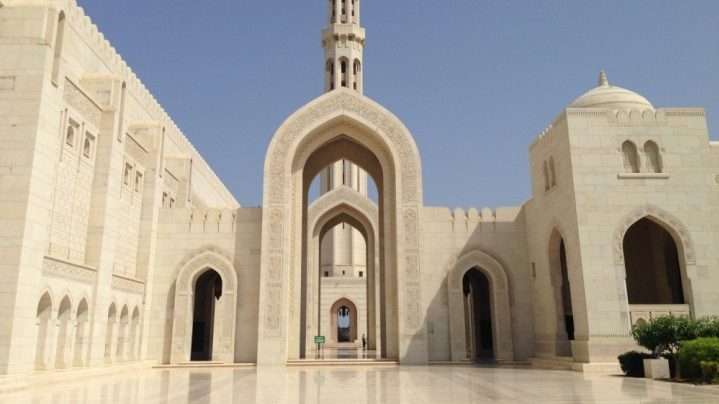 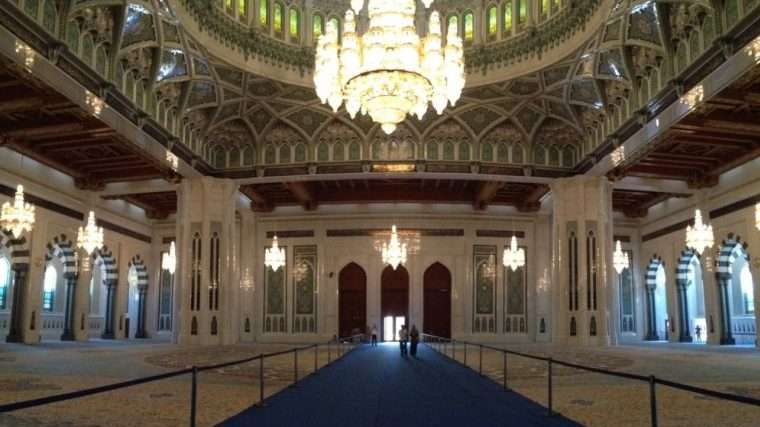 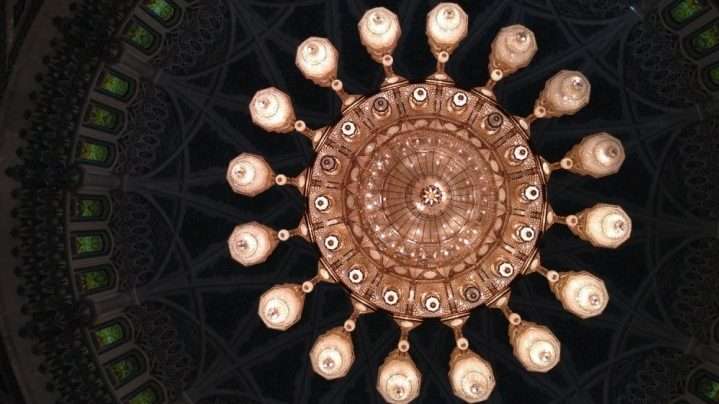 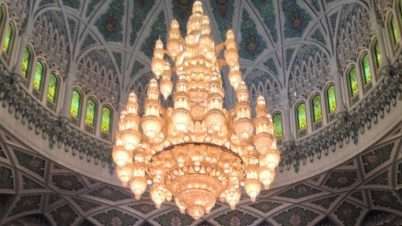 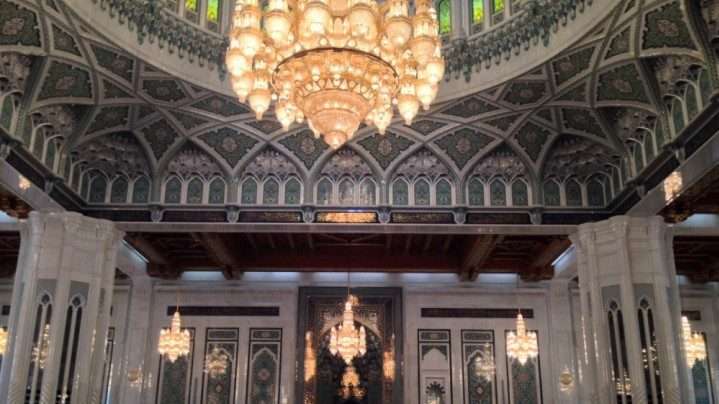 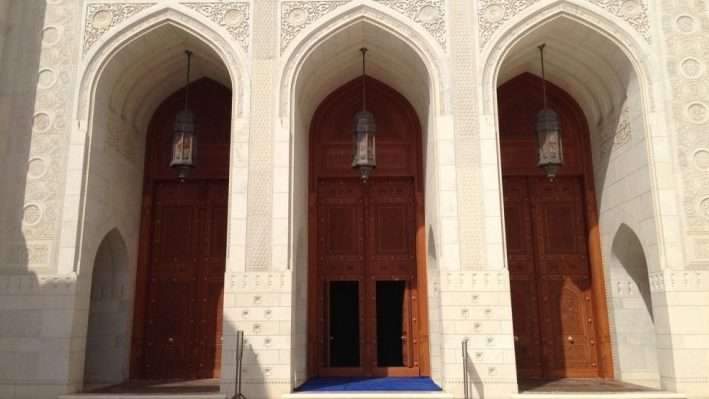 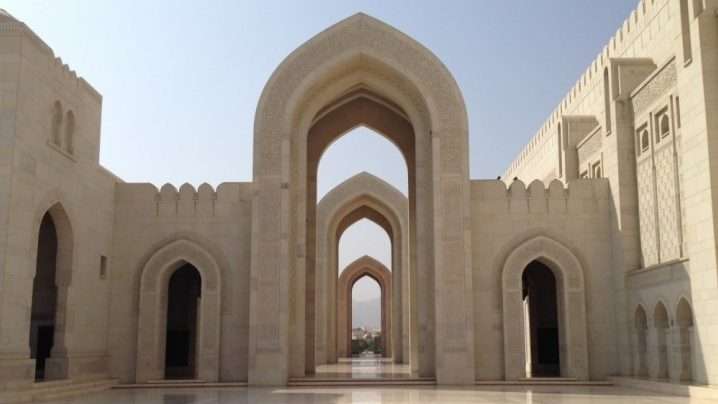 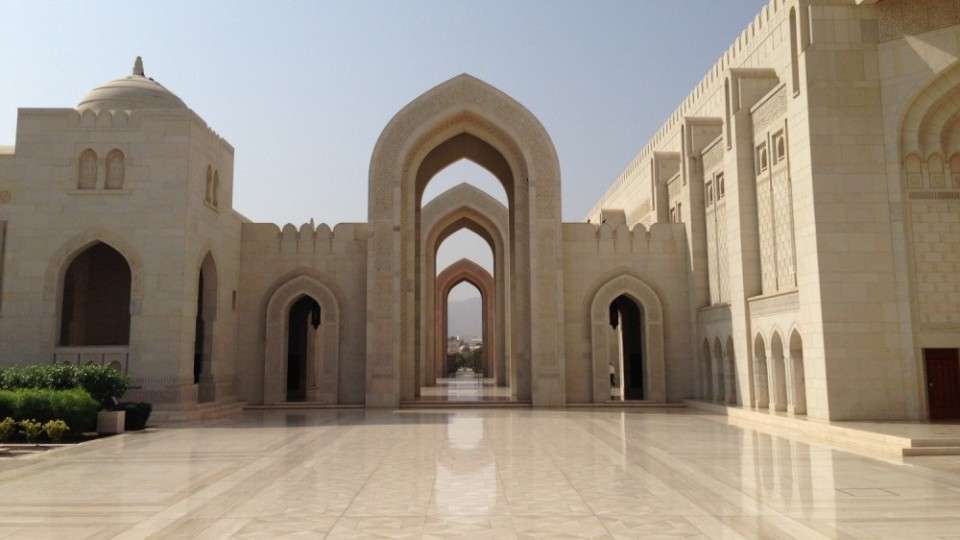 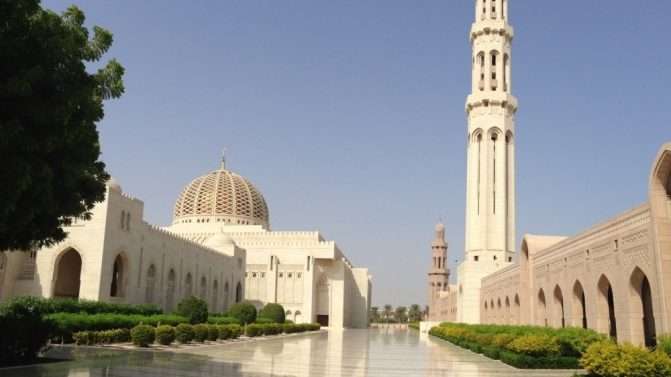 The Sultan Qaboos Grand Mosque is the main Mosque in the Sultanate of Oman.

In 1992 Sultan Qaboos directed that his country of Oman should have a Grand Mosque. A competition for its design took place in 1993 and after a site was chosen at Bausher construction commenced in 1995. Building work, which was undertaken by Carillion Alawi LLC took six years and four months.

The Mosque is built from 300,000 tonnes of Indian sandstone. The main musalla (prayer hall) is square (external dimensions 74.4 x 74.4 metres) with a central dome rising to a height of fifty metres above the floor. The dome and the main minaret (90 metres) and four flanking minarets (45.5 metres) are the mosque’s chief visual features. The main musalla can hold over 6,500 worshippers, while the women’s musalla can accommodate 750 worshipers. The outer paved ground can hold 8,000 worshipers and there is additional space available in the interior courtyard and the passageways, making a total capacity of up to 20,000 worshipers.

A major feature of the design of the interior is the prayer carpet which covers the floor of the prayer hall. It contains, 1,700,000,000 knots, weighs 21 tonnes and took four years to produce, and brings together the classical Tabriz, Kashan and Isfahan design traditions. 28 colours in varying shades were used, the majority obtained from traditional vegetable dyes. It is the second-largest single piece carpet in the world.

This hand-woven carpet was produced by Iran Carpet Company (ICC) at the order of the Diwan of the Royal Court of Sultanate of Oman to cover the entire floor of the main praying hall of the Sultan Qaboos Grand Mosque (SQGM) in Muscat. The carpet measures over 70 × 60 meters and covers the 4,343 square meter area of the praying hall, all in a single piece. The chandelier above the praying hall is 14 meters tall and was manufactured by company Faustig from Germany. The Mosque is built on a site occupying 416,000 square metres and the complex extends to cover an area of 40,000 square metres.

The newly built Grand Mosque was inaugurated by Sultan of Oman on May 4, 2001.