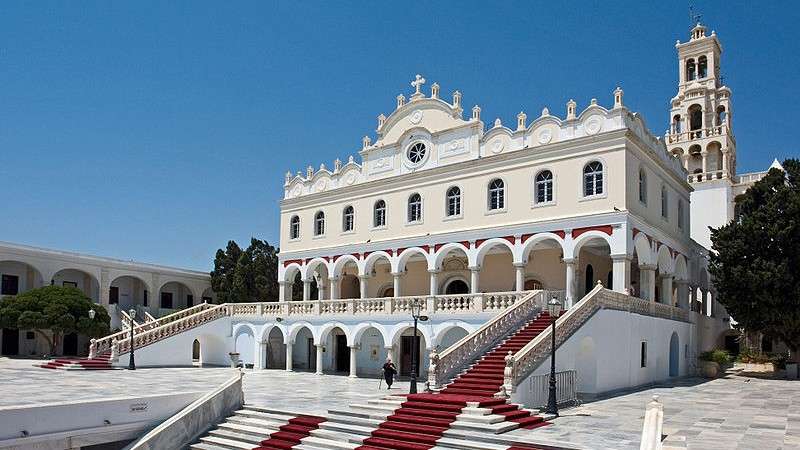 Tinos is a place of pilgrimage and hope, whitewashed towns of marble and stone, and beaches that are never crowded.

Famous amongst Greeks for the Panagia Evangelistria church, with its reputedly miraculous icon of Virgin Mary that it holds, a yearly pilgrimage that takes place on the date of the Dominion of the Virgin Mary (August 15). Many pilgrims make their way the 800 metres from the ferry wharf to the church on their hands and knees as a sign of devotion. The day also commemorates the 1940 sinking of the Greek cruiser Elli by an Italian submarine on August 15, 1940, at Tinos‘s harbour.

Tinos island situated in the Aegean Sea located in the Cyclades archipelago. In ancient times, Tinos was also known as Ophiussa (from ophis, Greek for snake) and Hydroessa (from Hydor, Greek for water). The closest islands are Andros, Delos, and Mykonos. Between 1207 and 1715, Tinos was in Venetian hands, and from 1715 to 1821, was ruled by the Ottoman Empire before joining with Greece.

Tinos has a varied landscape and has many beaches and is scattered with villages throughout. All around the island of Tinos, the islanders have made the most incredible things out of stone. The hills are all terraced with stone walls; every little village is connected to its most proximate neighbours by stone walkways set between a parallel set of stone walls.