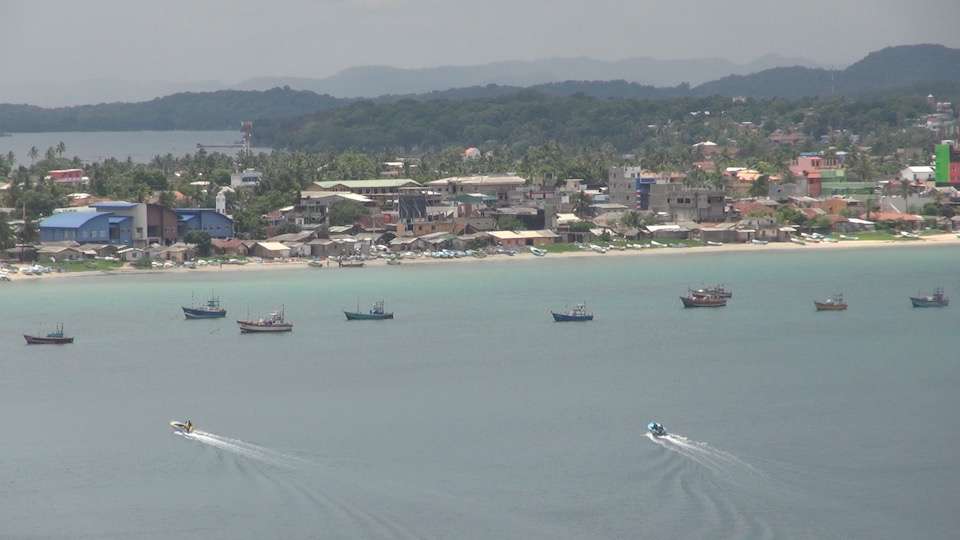 Located on the east coast of Sri Lanka, Trincomalee has been one of the main centres of Tamil language speaking culture on the island for over two millennia. One of the oldest cities in Asia, it has served as a major maritime seaport in the international trading history of the island with South East Asia.

Trincomalee which is a natural deep-water harbour has attracted seafarers, trader and pilgrims from Europe, Middle East, Africa, China, East Asia and Australasia since ancient times. Trinco, as it is commonly called, has been a seaport and Hindu pilgrimage centre since 400 BCE. The earliest epigraphical inscriptions found in Trincomalee city are in the Tamil language. The city has many Hindu sites of historical importance, sacred to Sri Lankan Tamils and Hindus around the world.

The city saw a lot of fighting during the civil war but has recently been moving beyond that, quickly growing into an interesting tourist location with decent beaches and sights.  Trincomalee is a very compact town so walking is a suitable way to see the town. For longer trips tuk-tuks are available at nearly every corner or you can catch a bus from the bus station in town. Deer are a very distinct and local attraction in Trincomalee, they were brought in by Europeans and are visible everywhere on the Fort peninsula and close to the bus station. Trinco is famous for its nice beaches in the nearby Uppuveli (6km) and Nilaveli (12km) north of the city.

Trincomalee has some of the most picturesque and scenic beaches found in Sri Lanka, relatively unspoilt and clean. The area is famous for bathing and swimming, owing to the relative shallowness of the sea, allowing one to walk out over a hundred meters into the sea without the water reaching the chest. Whale watching is a common pastime in the seas off Trincomalee, and successful sightings are on the rise with the increase of tourism in the area.

The recorded history of Trincomalee spans more than two and a half thousand years beginning with the civilian settlement associated with the Koneswaram temple, a Hindu shrine, constructed atop Swami Rock, also called Swami Malai or Kona-ma-malai, a cliff on the peninsula that drops 400 feet (120 metres) directly into the sea.

The Koneswaram temple, with a recorded history from the 3rd century BCE and legends attesting to classical antiquity, attracted pilgrims from all parts of India. The shrine itself was demolished in 1622 by the Portuguese (who called it the Temple of a Thousand Columns), and who fortified the heights with the materials derived from its destruction. Some of the artefacts from the demolished temple were kept in the Lisbon Museum including the stone inscription by Kulakottan (Kunakottan). The site’s ruins include an emblem including two fish and is engraved with a prophecy stating that, after the 16th century, westerners with different eye colours will rule the country for 500 years and, at the end of it, the rule will revert to the northerners.

Trincomalee‘s urbanization continued when made into a fortified port town following the Portuguese conquest of the Jaffna kingdom, changing hands between the Danish in 1620, the Dutch, the French following a battle of the American Revolutionary War and the British in 1795, being absorbed into the British Ceylon state in 1815.

Attacked by the Japanese as part of the Indian Ocean raid during World War II in 1942, the city and district were affected after Sri Lanka gained independence in 1948, when the political relationship between Tamil and Sinhalese people deteriorated, erupting into civil war. It is home to major naval and air force bases at the Trincomalee Garrison.

The Trincomalee Harbour, a circular natural harbour which the temple crowns towards the north, is referred to as Ko-Kannam or “Lord’s Cheek”, alluding to the cheek shape of Shiva’s bull Nandi. The great European powers vied for mastery of the harbour. The Portuguese, the Dutch, the French, and the British, each held it in turn, and there have been many sea battles nearby. The harbour, the fifth-largest natural harbour in the world, is overlooked by terraced highlands, its entrance is guarded by two headlands, and there is a carriage road along its northern and eastern edges. Trincomalee’s location, in a less well developed and sparsely populated area, has in the past hampered its own development. Nevertheless, plans are underway to develop Trincomalee as a commercial seaport.

Fort Fredrick is an old Dutch fort located on a peninsula east of the town centre. It still has a strong military presence from the war – the whole peninsula is basically a military base – but it is quite friendly and a nice place to explore.  Trincomalee‘s fort was occupied by the Dutch for most of the 18th century. The entrance to the roadway leading to Koneswaram temple is actually the entrance to what used to be Fort Fredrick, the Dutch Fort, built-in 1623 by the Portuguese and captured in 1639 by the Dutch. It then went through a phase of dismantling and reconstruction and was attacked and captured by the French in 1672.

On 8 January 1782, the British captured Trincomalee’s forts from the Dutch, the first place on the island they captured. The French recaptured it on August 29 of the same year after the Battle of Trincomalee. In 1783 the French ceded it to the British and subsequently, Britain ceded Trincomalee back to the Dutch Republic under the Peace of Paris (1783 Treaty of Versailles). In 1795 the British recaptured the city and held it until Sri Lanka‘s independence in 1948, with a claimed aim of “preventing Napoleon invading the colony” if left under the Dutch.

The British admiral Horatio Nelson, 1st Viscount Nelson called Trincomalee “the finest harbour in the world”, while the British Prime Minister William Pitt the Younger called the city “the most valuable colonial possession on the globe, as giving to our Indian Empire a security which it had not enjoyed from its establishment” and the harbour “the finest and most advantageous Bay in the whole of India“.

Before the Second World War, the British built a large airfield to house their RAF base, called the RAF China Bay and fuel storage and support facilities for the British fleets there. After the fall of Singapore, Trincomalee became the home port of the Eastern Fleet of the Royal Navy, and submarines of the Dutch Navy. Trincomalee harbour and airfield were attacked by a carrier fleet of the Imperial Japanese Navy in April 1942 in the Indian Ocean Raid of the war. However, the installation later served as an important launching point for British naval operations in 1944 and 1945.

The naval and air bases were taken over by Sri Lanka in 1957. Following independence from Britain, the political relationship between Tamils and Sinhalese deteriorated across the island. Interest surrounding Trincomalee was increased due to its strategic position and the discovery of its underwater and land Hindu ruins. In 1968, the unity government of majority Sinhalese dominated United National Party and the minority Tamil dominated ITAK Federal Party collapsed over disagreements about declaring the holy Hindu site a protected area. The city and its district were severely affected by the 30-year civil war that followed.

In the mid-1980s, India became concerned that the US Navy might gain access to Trincomalee. India was suspicious about goodwill visits by the US Navy to the port and Sri Lankan proposals to contract out the refurbishment of oil storage tanks and modernisation of port facilities.

In the aftermath of the 2004 Indian Ocean earthquake and tsunami, Trincomalee was a focal point for relief efforts on the eastern coast of Sri Lanka.