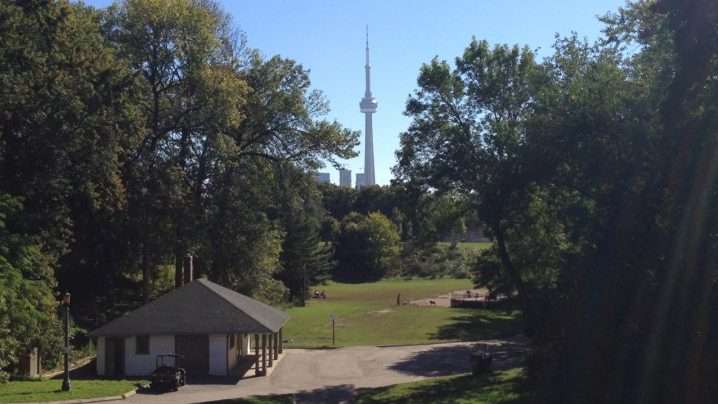 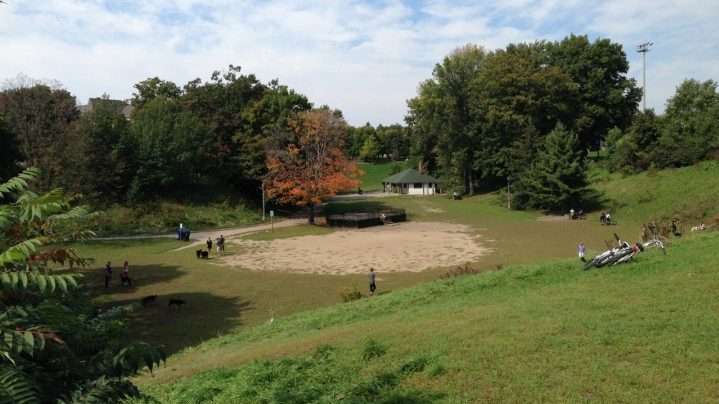 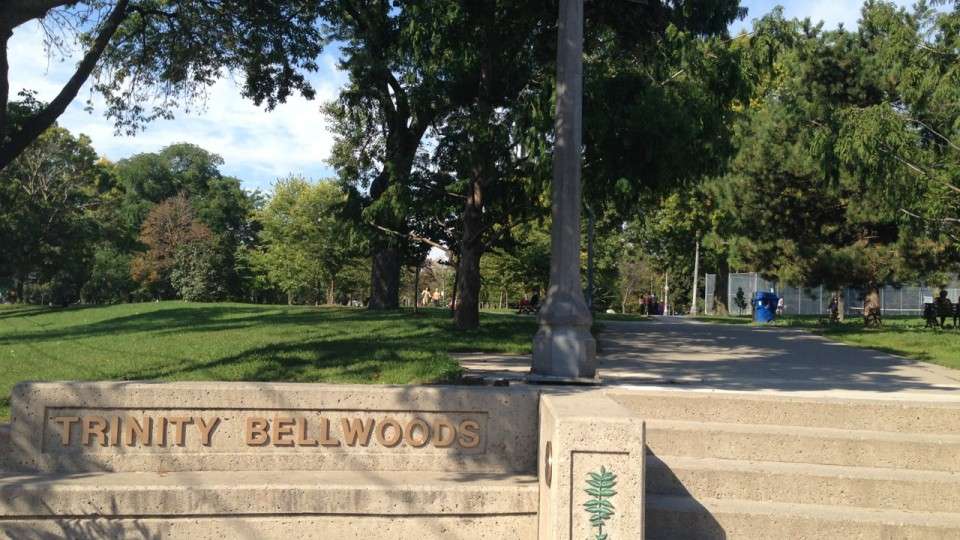 Trinity Bellwoods Park is a 14.6-hectare public park located in the west end of Toronto, Canada on Queen St. West at Strachan Ave. The park sits atop the now buried Garrison Creek ravine, now a city storm sewer, it still flows beneath the park from the northwest to the southeast corners.

Once the home of Trinity College, it features three ball diamonds, eight tennis courts, two volleyball courts an artificial ice rink, a dog off-leash area, a picnic area, a wading pool and a children’s playground and located in the south-west section of the park is the Trinity Community Recreation Centre.

Trinity Bellwoods is the site of many cultural events, including an anarchist bookfair, live theatre, performance art, and informal summer drumming circles. The largest annual cultural event in the park is Portugal Day, organized by the local residents and businesses of Portugal Village and the Portuguese community of Toronto.

In the northwest corner of the park, there is a small reminder of the diverse Latin American character of other nearby neighbourhoods: a bust of Simón Bolívar which was donated to the city.

The park is the site for an annual art sale in September as part of the Queen West Art Crawl.

The old Garrison Creek emptied into Lake Ontario at the site of Fort York, and the land north and west of the fort was set aside as a military reserve. As the town of York grew around the fort, the military reserve was gradually sold off in lots to retiring British officers and friends of the military command.

Much of the current parkland was originally purchased from a Mrs Cameron of Gore Vale in 1851 by Scottish-Canadian Bishop John Strachan, an influential Anglican deacon who wanted Toronto to have a private school with strong Anglican ties, partly in opposition to the recently secularized University of Toronto. Buildings were soon constructed and students began attending Trinity College in 1852. After federation with the University of Toronto in 1904 and completion of the downtown Trinity campus in 1925, the school left this location.

The original buildings were then sold to the City of Toronto and most were demolished in the early 1950s. The destruction of the Old Trinity buildings marked the beginning of two decades of extensive heritage destruction in Toronto. Of the college itself, only the stone and iron gates now remain, at the Queen Street park entrance facing south on Strachan Avenue, although the former St. Hilda’s College building, (the women’s residence of Trinity College) still overlooks the northern half of the park on the western edge. It is now a seniors’ residence, John Gibson House.

In the 1950s Garrison Creek was entirely buried and the creek ravine backfilled around the Crawford Street Bridge, raising the surface of the northern end of the park to almost the height of Dundas Street. The steep drop from this upper level to the lower part of the park has become a popular local toboggan run in winter.

In 2001, the Friends of Trinity Bellwoods Park was formed to coordinate volunteer activities and provide input to the city on park management.