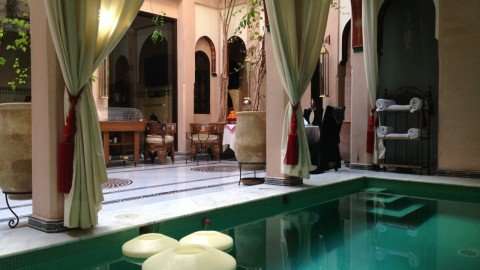 A riad is a large traditional Moroccan house or palace built around a central courtyard or interior garden, often converted into a hotel.

The word riad comes from the Arabian term for garden, Arabic: رياض‎‎, ryad.

Traditionally riads were inward focused, which allowed for family privacy and protection from the weather in Morocco. This inward focus was expressed in the central location of most of the interior gardens and courtyards and the lack of large windows on the exterior.

The Riad is the Moroccan traditional house, normally with two or more storeys around an Andalusian-style courtyard that contained a fountain. Riads were the stately city homes of the wealthiest citizens such as merchants and courtiers. The style of these riads has changed over the years, but the basic form is still used in designs today.

This design principle found support in Islamic notions of privacy. Entrance to these houses is a major transitional experience and encourages reflection because all of the rooms open into the central atrium space.

In the central garden of traditional riads, there were often four orange or lemon trees and possibly a fountain. The walls of the riads are adorned with tadelakt plaster and zellige tiles, usually with Arabic calligraphy, with quotes from the Quran.

There has been a surge in interest in this form of a house with a wave of renovation in towns such as Marrakech and Essaouira, where many of these often-crumbling buildings have been restored to their former glory as hotels or restaurants.

Many of the properties in Marrakech have been bought by foreigners. This foreign interest has brought new challenges but the investment has helped with the restoration of the UNESCO site and has helped revive many of the handicrafts and artisan trades that were gradually being lost before this trend.

Many of the restored riads in the districts of Mouassine and Lakssour offer the finest examples of restoration as historically these areas contained many of the grand palaces from Marrakech‘s Saadian period.

Many riads are now used as hotels or restaurants.

My favourite riad in Marrakech is Dar Anika, centrally located and excellent service, it feels very much like staying in a palace rather than a hotel. The service is very personal and each guest is catered to their own needs.