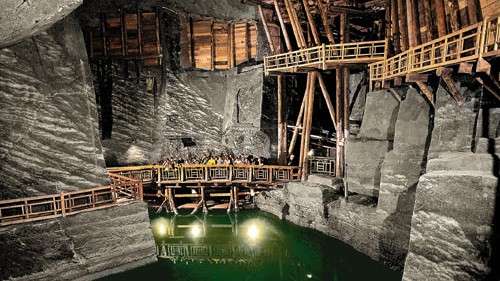 Wieliczka is a town 17 km from Krakow known for its ancient Wieliczka Salt Mine, a 13th-century ancient mine takes you up to 135 metres below ground to discover underground tunnels, chambers, chapels, lakes and even a resort.

Claustrophobia sets in as you descend down the long shaft into the earth but all is forgotten when you soon discover the world beneath.

A visit here can’t be missed, being a short distance from Krakow, a morning or afternoon is enough to take in this mysterious world beneath the surface and is as close as I’ll get to know what life was like as a miner, I was hugely impressed by its truly unique features and history.

The Wieliczka Salt Mine continuously produced table salt from the 13th century until 2007 as one of the world’s oldest operating salt mines. Reaching a depth of 327 meters and over 300 km long, it features a 3.5-km touring route for visitors, less than 1% of the length of the mine’s passages.

The mine’s attractions include dozens of statues and an entire cathedral that have been carved out of the rock salt by the miners. Even the crystals of the chandeliers are made from rock salt that has been dissolved and reconstituted to achieve a clear, glass-like appearance.

To get down to the 64-metre level of the mine, visitors must descend a wooden stairway of 378 steps. There are a large cathedral and reception room that can be reserved for private functions such as weddings or private parties. A large chamber with walls carved to resemble wooden chapels built by miners in earlier centuries. An underground lake and exhibits on the history of salt mining. It also houses a private rehabilitation and wellness complex. Visitors take an elevator back up to the surface.

In 1978 the Wieliczka Salt Mine was placed on the original UNESCO list of the World Heritage Sites.