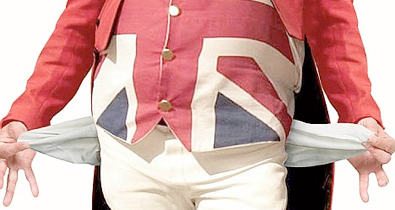 Britain ranked the lowest quality of life in Europe and this is expected to decline because of the recession. These findings were reported when Britain was in its good times but now with rising unemployment, rising costs of living and a diving strength of the British Pound, can it get any worse than it already is?

The weak value of its currency in the world market, losing as much as 40% against some currencies, it really starts to level off the true value of Britain and bringing things more in line with the true cost and value of goods and services. It seems this is the only way that Britain can try to entice investors to bring foreign money for long term growth, but from experience living in London for the past 8 years, Britain lags behind in efficiency and productivity.

Where most of the western world has improved the way things are done, in Britain it takes up to 3 times longer to get anything really done correctly, this means investments can take up to a year to be approved by governing bodies, purchase and sales of the property could take up to six months or more to complete, planning for the future means planning for what should have already been decided 20 years previously.

Britain now ranks 17th in the top 20 countries for quality of life sliding down the scale and now even or just below that of Italy, which now overtakes Britain as a ‘richer’ nation.

Britain suffers having an unelected government and Prime Minister unpopular amongst the public, lack of leadership and opposition that offers no better solutions, rising ‘hate’ groups like the BNP, cost-cutting conservatives with other spending agendas like spending more to build a new ‘Boris Island’ airport too far to claim as being a London airport and would cost up to 5-6 times more than updating Heathrow, the Cross Rail project which took over 20 years to be approved only to find it may be slashed and offers no ‘real’ added transport links that don’t already exist, and of course London will be the world stage for the 2012 Olympics, which despite promises to the Olympic committee, will leave no legacy behind except the cost behind the games.

Living in the United Kingdom has been a very good place to live and offered great opportunities, but like any good investment, one must also know when to sell and pull out. In comparison to Europe, Britain is now falling in line with the rest of Europe, salaries have dropped 40% now that the Euro and British Pound are valued almost one to one. I’ve been predicting this for years and the reality has proved it true.

Tony Blaire chose the right time to leave before the collapse for he saw it coming, the first decade of the 21st century we gave too much power to those with bad intentions and misled the world into fighting wars that were not ours, but for the gains of those who had invested interests.

It has a long way to go before it can regain what it has lost, with a massive debt that will take another 60-80 years to pay. The IMF (International Monetary Fund) says Britain’s debt crisis is the worst among major economies.

So.. is it a good time to leave? Personally I have invested too much in the United Kingdom, to leave now means I would have lost the majority of my investments. the plan is to stick it out and hope the strength of the British Pound can be regained and only then it will be time to depart for a better life elsewhere.