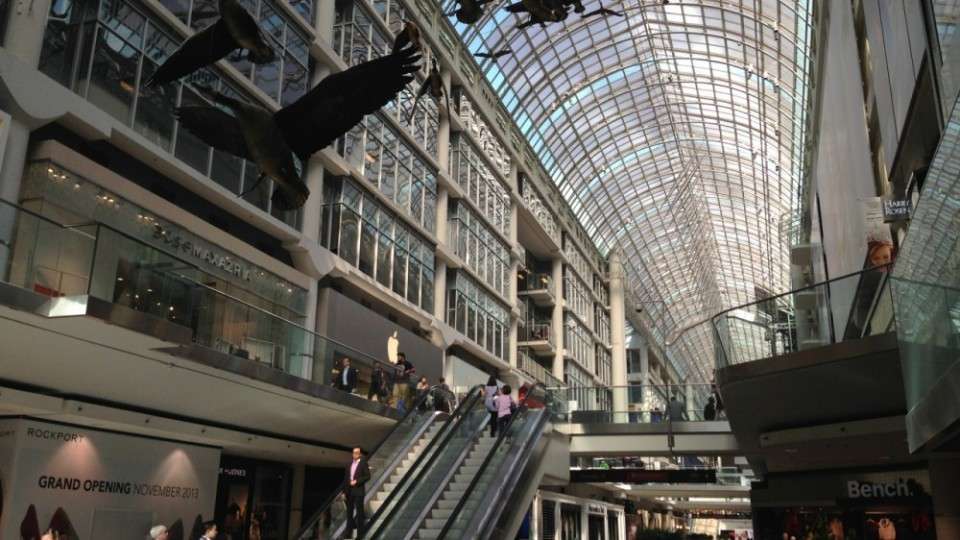 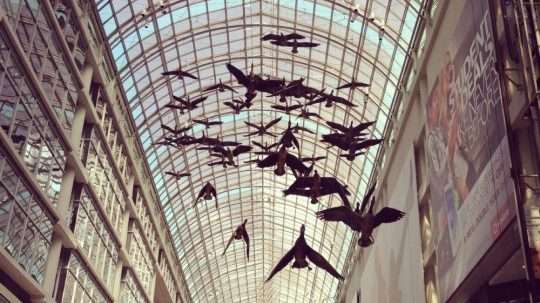 The Eaton Centre is Toronto‘s top tourist attraction with more than one million visitors per week.

A multi-levelled, vaulted glass-ceiling shopping mall and office complex in downtown Toronto, Canada. Modelled after the Galleria Vittorio Emanuele II in Milan, Italy, and named after the now-defunct Eaton’s department store chain that once anchored it.

Considered revolutionary at the time, the complex was designed by Eberhard Zeidler and Bregman + Hamann Architects and influenced shopping centre architecture throughout North America. Its interior passages form part of Toronto’s PATH underground pedestrian network, and the centre is served by two Toronto subway stations: Dundas and Queen. The Eaton Centre contains three office buildings, is linked to a 17-storey Marriott hotel, and to Canada‘s largest store, the flagship location of the Hudson’s Bay department store chain.

One of the most prominent sights in the shopping mall is the group of fibreglass Canada Geese hanging from the ceiling. This sculpture, named Flight Stop, is the work of artist Michael Snow. It was also the subject of an important intellectual property court ruling. One year, the management of the centre decided to decorate the geese with red ribbons for Christmas, without consulting Snow. Snow sued, arguing that the ribbons made his naturalistic work “ridiculous” and harmed his reputation as an artist, and in Snow v. The Eaton Centre Ltd., the court ruled that even though the Centre owned the sculpture, the ribbons had infringed Snow’s moral rights. The ribbons were ordered removed.

Timothy Eaton founded a dry goods store on Yonge Street in the 19th century, and that small shop went on to revolutionise retailing in Canada, ultimately becoming the largest department store chain in the country. By the 20th century, the Eaton’s chain owned most of the land bounded by Yonge, Queen, Bay and Dundas streets. The Eaton’s land, once the site of Timothy Eaton’s first store, was occupied by Eaton’s large Main Store, the Eaton’s Annex and a number of related mail order and factory buildings. As the chain’s warehouse and support operations were increasingly shifting to cheaper suburban locales in the 1960s, Eaton’s wanted to make better use of its valuable downtown landholdings. In particular, the chain wanted to build a massive new flagship store to replace the ageing Main Store at Yonge and Queen and the Eaton’s College Street store a few blocks to the north.

In the mid-1960s, Eaton’s announced plans for a massive office and shopping complex that would occupy several city blocks. Initial plans for the centre called for the demolition of both Old City Hall and the Church of the Holy Trinity, as well as the closing of a number of small city streets. After a fierce local debate over the fate of the city hall and church buildings, Eaton’s put its plans on hiatus in 1967.

The first phase, including the nine-storey, 1,000,000-square-foot (93,000 m2) Eaton’s store, opened in 1977. The old Eaton’s store at Yonge and Queen was then demolished and the south half of the complex opened in its place in 1979. The same year, the north end of the complex added a multiplex cinema, Cineplex, at the time the largest in the world with 18 screens.

Despite the controversy and criticisms, the centre was an immediate success, spawning many different shopping centres across Canada bearing the same brand name of Eaton. The mall’s profits were said to be so lucrative that it has often been credited with keeping the troubled Eaton’s chain afloat for another two decades before it finally succumbed to bankruptcy in 1999.

Shortly after Sears’ acquisition of Eaton’s, the Timothy Eaton statue was moved from the Dundas Street entrance to the Royal Ontario Museum. The complex retains the Eaton Centre name, representing an ongoing tribute to Timothy Eaton and the small shop he once opened at this location.