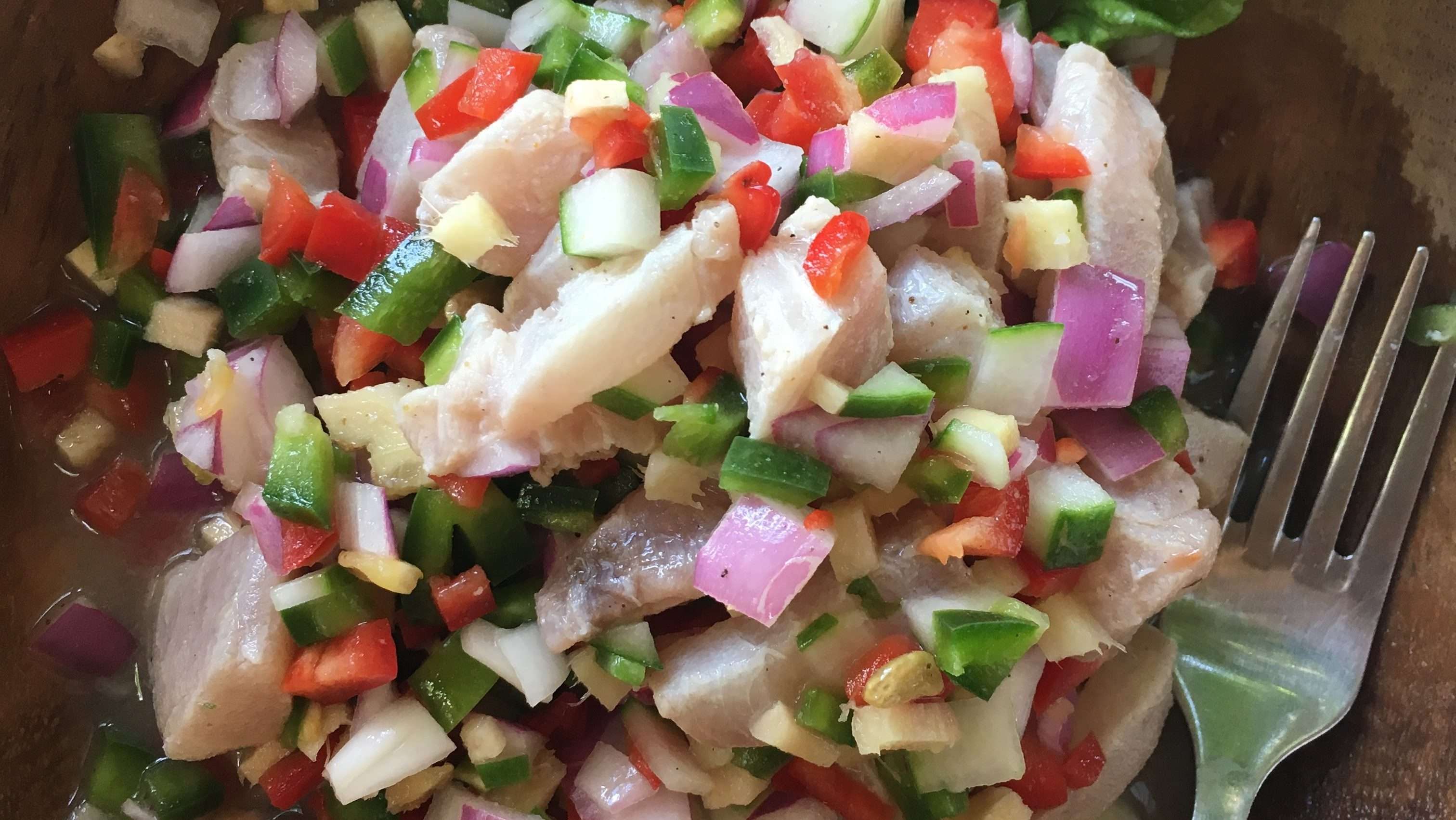 Literally “eaten raw“, Kinilaw is a raw seafood dish native to the Philippines, similar to ceviche.

It is more accurately a cooking process that relies on vinegar to denature the ingredients, rather than a dish, as it can also be used to prepare meat and vegetables.

Meat-based kinilaw (usually known as kilawin) are more common in the northern Philippines and use blanched and lightly grilled meat (not raw).

Kinilaw dishes are usually eaten as appetizers before a meal, or as finger food (pulutan) with alcoholic drinks.

Unlike Latin American ceviches, which exclusively use citrus juices, kinilaw instead primarily uses vinegar and other acidic fruit juices.

The most common kinilaw dish is kinilaw na isda (“fish kinilaw“) prepared using raw cubed fish mixed with vinegar (usually coconut vinegar or cane vinegar) as the primary denaturing agent; along with a souring agent to enhance the tartness, and flavoured with salt and spices like black pepper, ginger, onions and chillis.

To neutralize the fishy taste and the acidity before serving, juice extracts from the grated flesh of tabon-tabon fruits, dungon fruits, or immature small young coconuts are also commonly added. Some regional variants also add gatâ (coconut milk), sugar, or even soft drinks to reduce the sourness.

Ingredients used in seafood and meat kinilaw must be fresh and properly cleaned, as there are health hazards involved with consuming raw seafood and partly cooked meat.

Variants predominantly from the northern Philippines use meat, called kilawin, including goat meat, beef, carabao, pork, and chicken. Unlike fish kinilaw, meat kilawin are not eaten raw but are cooked by boiling or grilling or both. They are usually done rare to medium rare, though in some cases the meat are fully cooked. Meat-based kilawin are also traditionally eaten with papaít (literally “bittering agent”), usually the bile extracted from the gall bladder or by squishing the chewed grass in an animal’s stomach.

Other ingredients used in kinilaw include shrimp, squid, clams, oysters, crabs, sea urchin roe, seaweed, jellyfish, shipworms (tamilok) or even beetle larvae (grubs), among others. They vary in terms of preparation, depending on the ingredients, from raw to fully cooked. For example, shrimp are prepared raw while squid needs to be blanched first to tenderize the flesh.

In the southern Philippines, the Tausug people of the Sulu islands refer to fish kinilaw as lawal. Unlike other kinilaw dishes, lawal only uses vinegar to wash the fish, and primarily relies on citrus fruits and other souring agents to denature the fish meat. Among the Maranao people of southwestern Mindanao, biyaring is a type of kinilaw made with tiny shrimp. It is a regional favourite and is notable because it is ideally prepared while the shrimp are still alive.

Top things to do in El Nido