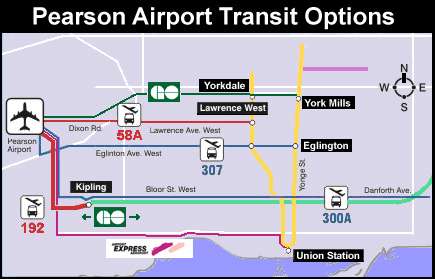 There are cities in the world you enjoy arriving, knowing that when you get there you’ll shuttle through and out of the airport efficiently on your way but there are poor transport links for Toronto Airport.

In the case of Toronto Pearson International Airport, a visitor will struggle to find a cheap alternative to get to the city centre. Limited choices of sedans, taxis and airport limos are expensive, where a one-way ride to the city centre could reach as high as $80 (ouch!). There is an alternative public transit of the 192 Airport Rocket which takes you to the start of the subway system at Kipling Station for as little as $3 one way, though extra fares must be paid when entering the underground, or subway as it’s known locally. Though it’s not the sort of ride you want after a long haul flight.

Toronto Pearson International Airport was voted Canada’s worst airport in a recent poll by the Flight Network, most likely because it is Canada‘s busiest airport, which would get more votes anyway. Though my reasons are from an international traveller like myself. Arriving in a new destination requires organised transportation to get you on the way, and most likely the first impression you’ll get of any city.

Cities like Barcelona, London, Madrid, Amsterdam, Hong Kong, San Francisco are all very well connected to the airports that serve them. Easy, efficient and very cost-friendly. These cities know that the future includes increased air travel, where airports are hubs and links, in addition to buses and trains, rather than just an airport. These cities are very well prepared for tomorrow.

Toronto has grown, almost doubled in size over the last 40 years, and no improvements have ever been made to make Toronto Pearson International Airport better connected to the city centre. Business and leisure travellers need infrastructures to help them on their way quickly and cost-effectively. Toronto remains possibly the worst-ranked airport transportation links I’ve seen anywhere in the world compared to other international cities of its size.