Things to do in Santiago Chile 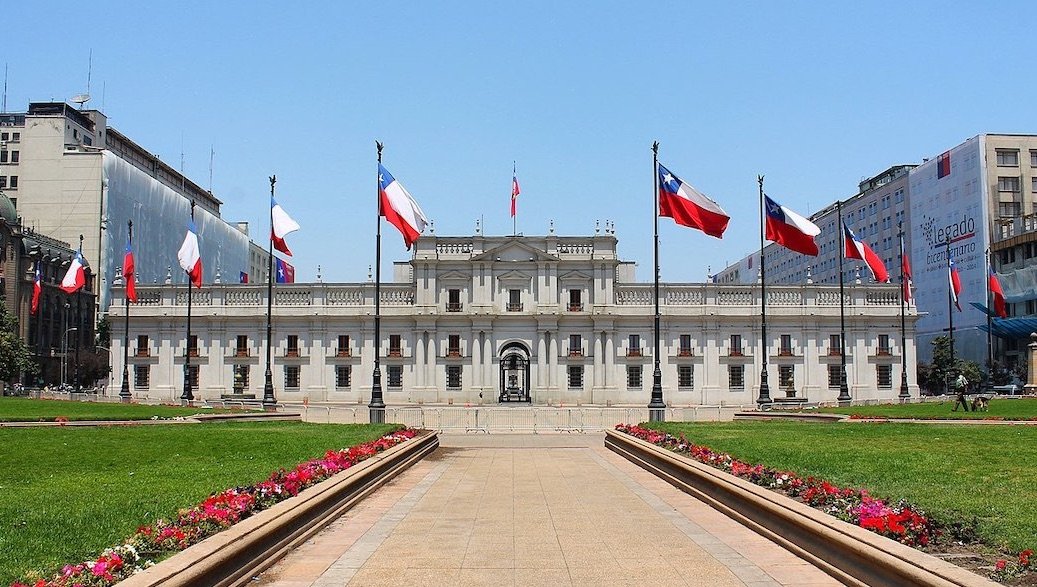 Santiago de Chile, usually shortened to Santiago, is the capital and economic centre of Chile. With its museums, events, theatres, restaurants, bars and other entertainment opportunities, it is the political and cultural centre of the country.

A city in a wide-open valley where the beautiful mountain scenery circles the city. Flanked by the awe-inspiring Andes on one side and the Chilean Coastal Range on the other, Santiago de Chile‘s setting surrounded by mountains in the country’s central valley.

Palacio de La Moneda, or simply La Moneda, is the seat of the President of the Republic of Chile. It occupies an entire block in downtown Santiago, in the area known as Civic District. In 1973 the palace was bombarded by Pinochet’s military forces in a coup d’état against then-president Salvador Allende. Visitors are allowed to freely wander through the inner courtyards, as well as reserve a free tour through the palace. Palacio de la Moneda

Changing of the Guard takes place on the plaza in front of La Moneda Palace, when two mounted units lead a military band and the new guard handover to the departing guard. A Colour Guard emerges and salutes are exchanged between the Honour Guard at the main gate and the officers of each unit while the band plays martial music.

Changing the Guard at La Moneda Palace takes place on:
Even Days in January, April, May, August, November and December.
Odd Days In February, March, June, July, September and October.

Santiago Metropolitan Cathedral is the seat of the Archbishop of Santiago de Chile and the centre of the archdiocese of Santiago de Chile. Construction of the neoclassical cathedral began in 1753 and ended in 1799. The architect was the Italian Gioacchino Toesca. Further alterations ordered at the end of the 19th century gave it its present appearance. Previous cathedrals in the archdiocese had been destroyed by earthquakes. The cathedral, located in the city’s historic centre, faces the northwest corner of Santiago’s Plaza de Armas and stands near the Palacio Arzobispal de Santiago, the administrative centre for the archdiocese. Santiago Metropolitan Cathedral is of a Baroque style, with lots of ornaments, frescos, and gilded columns. Showing that architecture has layers of history, the two towers of the cathedral were added almost a whole century later.

Museum of Memory and Human Rights

The Museum of Memory and Human Rights is a Chilean museum located in Santiago, dedicated to commemorate the victims of human rights violations during the civic-military regime led by Augusto Pinochet between 1973 and 1990. It was inaugurated by former President Michelle Bachelet on January 11, 2010, which formed part of government works celebrating the bicentennial of Chile.

Huelén Hill is a small hill in the centre of Santiago, Chile. The hill has an altitude of 629 m and a height of 69 m over the surrounding area. The hill is the remnant of a volcano 15 million years old. The hill comprises a 65,300 square metre park adorned with ornate facades, stairways, and fountains. At the highest point, there is a viewpoint popular with tourists visiting the city.

Take a funicular and ride up the Cerro San Cristóbal – a man-made park in the Bella Vista area and the largest green space in the city that also houses the national zoo, a botanical garden, and two large swimming pools – and drink in the sweeping views from the top.

Cerro San Cristóbal is a hill in northern Santiago, Chile. It rises 850 m and about 300 m above the rest of Santiago; the peak is the second-highest point in the city, after Cerro Renca. Cerro San Cristóbal was named by the Spanish conquistadors for St Christopher, in recognition of its use as a landmark.

The Sanctuary of the Immaculate Conception on San Cristóbal Hill is one of the principal places of worship for the Catholic Church of Chile, as well as being an icon of Santiago, Chile. It is notable in particular for a large statue of the Immaculate Conception, which is located at the summit of San Cristóbal Hill, some 863 meters above sea level.

The Costanera Center is a business and commercial complex that includes a six-floor shopping mall, the Gran Torre Santiago and three other skyscrapers – two high-end hotels and an office building. The tallest of the four buildings, the Torre Costanera, was designed by architect César Pelli and is 300 metres tall, making it the tallest building in Latin America.

The barrio was developed in 1923 by a group of architects and consists of only two streets. The neighbourhood intersects at Calle Londres and Calle París, located behind the San Francisco Church, in its former orchard. Barrio París-Londres features shops, hostels, hotels and cobblestone streets with renovated mansions, reminiscent of the Latin Quarter in Paris, France. The building at Calle Londres 38/40 is a former jail and torture facility, used during the Pinochet regime. Tiles in front of the building depict the names of former political prisoners who were held there.

Barrio Bellavista is known as Santiago‘s bohemian quarter, with numerous restaurants, boutiques, avant-garde galleries, bars, and clubs. Many of the city’s intellectuals and artists live in Bellavista, and Pablo Neruda‘s house in Santiago, La Chascona, is in the district.

The Mercado Central de Santiago is the central market of Santiago de Chile. Opened in 1872 the market is housed in a building in which its main feature is a cast-iron roof and supporting structure, which was fabricated by the Scottish firm R Laidlaw & Sons, Glasgow. The metal structure stands on a square base and features a vaulted ceiling. Its intricate roof design consists of a central pyramidal roof crowned by a domed tower, which is surrounded by 8 smaller roofs with a two-tier design. The structure is enclosed by a masonry building.

The Cementerio General de Santiago is one of the largest cemeteries in Latin America with an estimated 2 million burials. Established in 1821 after Chile‘s independence. More than 85 hectares of land for grounds filled with ornate mausoleums surrounded by palm and leaf trees set amidst lush gardens and numerous sculptures. This cemetery is the final resting place for at least 172 of the most influential people in Chile, including all but two of the deceased Presidents of Chile, the exceptions being Gabriel González Videla and Augusto Pinochet. One of the most visited memorials is that of former President Salvador Allende who had been buried in the Santa Ines cemetery at Viña del Mar following his suicide in the 1973 coup d’état.

The Chilean National Museum of Fine Arts, located in Santiago, Chile, is one of the major centres for Chilean art and for broader South American art. Established in 1880, the current building, the “Palace of the Fine Arts”, dates to 1910 and commemorates the first centennial of the Independence of Chile. It was designed by the Chilean architect Emile Jéquier in a full-blown Beaux-arts style and is situated in the Parque Forestal of Santiago. Behind it is located the Museum of Contemporary Art of the University of Chile, which is also located in the old School of Fine Arts.

Things to do in Santiago Chile